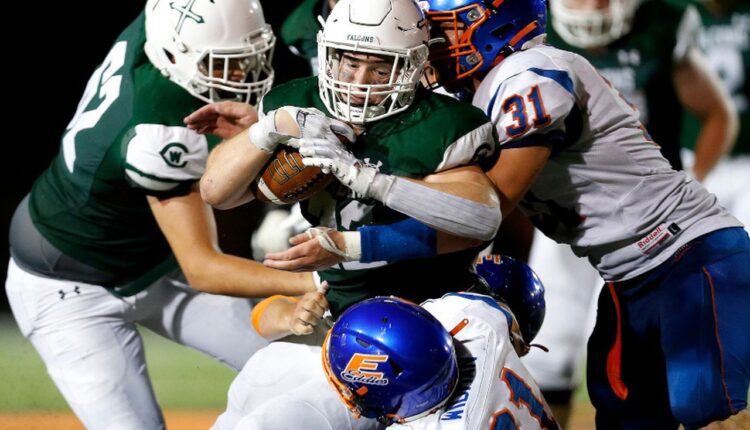 Catholic Central continued its winning streak, while Wayland snapped its skid. West Catholic’s victory brought an end to a lengthy winning streak by a Michigan power.

Check out highlights and scores below.

Hunter Schichtel’s 10-yard touchdown run in overtime was the game-winner for Byron Center. Strichel rushed for 121 yards on 24 carries, and he scored three touchdowns. Schichtel also threw for 63 yards and a score, and his fourth-quarter 2-point conversion completion to Isaac Lee forced overtime. Luke Laska led the Bulldogs defense with 16 tackles and Landon Tungate and Justin Reichert had 11 each.

The three-time defending state champion Cougars scored a pair of touchdowns in the game’s first minute, 45 seconds and breezed to the victory at the University of Michigan. It was the Cougars’ 37th consecutive win. Connor Wolf threw five touchdown passes and finished 11-of-17 for 177 yards. Jami Williams caught three touchdown passes. Sean Sullivan rushed for 138 yards and Kellen Russell-Dixon added 104, and both scored a touchdown.

Jamarion Collins threw two touchdown passes and ran for three more for the Wolverines. Rashad Dorsey and Jeff Zelaya each rushed for a score, and Dorsey caught a touchdown pass.

The Wildcats led 28-13 at halftime and went on to break a 10-game losing streak. Dustin Loomans scored on touchdown runs of 57, 2 and 5-yards, and he threw a 39-yard touchdown pass, too. Maverick Daley scored on a pair of short runs. Loomans finished with 164 yards on 19 carries. Miles Gibson threw a pair of touchdown passes for Hopkins.

West Catholic football coach Landon Grove guided the Falcons to a 28-20 win over Edwardsburg in his coaching debut with the team on Aug. 26, 2022 at Ray and Sue Smith Stadium in Holland, Mi. (Photo courtesy of Rick Kimball)

The Falcons snapped Edwardsburg’s 35-game winning streak. Tim Kloska rushed for 160 yards on 18 carries and three touchdowns, helping the Falcons give Landon Grove a victory in his West Catholic coaching debut. West Catholic built up a 28-0 second-half lead and fought off the Eddies the rest of the way. Kloska also had 12 tackles, and Joe Debski and Dom Inbody had 10 apiece.