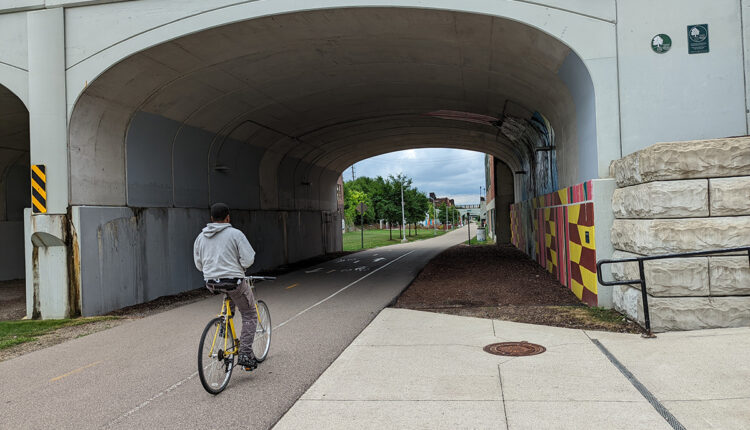 Are Detroiters being heard on historic investment in neighborhoods?

Residents near the planned expansion of the Dequindre Cut say the city hasn’t done enough to include them and fear they won’t have a say – or a place – in a project that could transform city neighborhoods.

“What’s going on and transpiring in this particular neighborhood is ungodly and very disrespectful,” Forest Park/McDougall-Hunt resident Jerone Simpson told BridgeDetroit. “(The city) is doing things without even consulting with the residents that have been in this neighborhood for a long time.”

Simpson is referring to Detroit’s plan to extend the Dequindre Cut past Mack Avenue to East Grand Boulevard, beyond Interstate 94. Brad Dick, the city’s group executive of services and infrastructure, said the expansion is expected to cost about $15.5 million, including $2.7 million for the installation of bike lanes and $1.8 million to add cameras.

The project is part of the city’s $200 million Joe Louis Greenway – a proposed 27.5-mile biking and walking path that will connect parks and neighborhoods across Detroit’s riverfront. The expansion represents a historic investment in city neighborhoods and will link five Detroit City Council districts to Dearborn, Hamtramck and Highland Park. State funding has been committed to fully cover the cost of the extension, Dick said.

The Dequindre Cut expansion is part of the city’s $200 million Joe Louis Greenway – a proposed 27.5-mile biking and walking path that will connect parks and neighborhoods across Detroit’s riverfront. (BridgeDetroit photo by Bryce Huffman)

City officials say community engagement over the plan has been a “staple” of the greenway project for the past several years, with dozens of public meetings and events, signage and flyers.

Antoine Bryant, the city’s director of Planning and Development, added Detroit’s outreach “means going to each and every single one of our neighborhoods on a repeated basis …  to make sure that we’re hearing every concern and the breadth of concerns from residents.”

The Joe Louis Greenway, he said, will be a “tremendous benefit” to Detroiters, with “green space literally and figuratively in your backyard” and “easier access to the riverfront.”

Simpson agrees that the greenway could “really change the look and feel of this neighborhood in some good ways.” But he said the lack of resident engagement upsets him.

“If they’re not telling us or communicating the plan to us first, that means they don’t see us being here by the time they fully develop this area,” he said.

Simpson, a neighborhood resident since 1963, said he’s taking care of his elderly mother in the house he grew up in. He believes the added amenity could raise area property values, which he said isn’t a bad thing. But he’s also concerned about the potential of neighbors being priced out of their homes.

“My mom is 99 and she has no plans or ability to relocate now,” he said.

Bryant said he understands that some residents are concerned about the potential for gentrification, but he wants a better understanding of what their “core concerns” are.

Children roller skating on the Dequindre Cut at the Wilkins Street entrance, two blocks from where the path currently ends at Mack Avenue. Detroit wants to extend the cut all the way to East Grand Boulevard past Interstate 94 as a part of the 27.5-mile Joe Louis Greenway loop through Detroit, Hamtramck and Highland Park. (BridgeDetroit photo by Bryce Huffman)

Ilene Banks, another longtime resident, said she likes the idea of extending the Dequindre Cut, but said she doesn’t believe the city would alter its plans if she didn’t support it.

“It seems like they would have gone on and done (the extension) even if people didn’t like it because they didn’t talk to us about it yet,” Banks said.

Banks said many residents in the neighborhood are older and either grew up there or have lived there for decades and they haven’t seen much attention from the city.

She is among the residents near the Dequindre Cut extension area who told BridgeDetroit that the city has yet to reach out about the plan, but Dick said the city began resident outreach in 2019, talking to block clubs, installing posters and distributing flyers.

“We hosted 14 meetings and attended 44 additional meetings and events across the city,” Dick said in a statement.

Resident Yvonne Robinson said she feels as if the city has done “nothing for this community.”

“We don’t see no changes or anything like that. There’s no stores, there’s hardly any gas stations. People that don’t have cars gotta walk two or three miles to the store and all this other kind of stuff. It’s just like we live out in the country over here,” Robinson said.

Jason Hill, a resident of the community and real estate broker with Historic Realty Detroit, said the McDougall neighborhood “has a long history of disinvestment” and is one of the closest in proximity to Detroit’s downtown. It’s also located west of Islandview and West Village, two rapidly gentrifying communities. The greenway could help build up the area, he said, and make residents feel more included.

“McDougall is an area in Detroit that for many is long forgotten and there’s families that have lived there for generations, but it’s disconnected,” he said. “So, allowing a greenway like this to come through is huge to connect people to other thriving parts of the city. These things (greenways) are game changers for communities like this, which I’m invested in and so I know firsthand the potential of growth.”

Higher property values, Hill said, could make home sales a reality for Detroit residents in areas where it has been a struggle and “create equity for our families,” he added.

With the greenway expansion, residents like Robinson, who have been there and plan to stay, said they want to see more development come with it.

“I wanna see stores and businesses over here, definitely,” she said, “but how do we know it will be the stores and restaurants that people here want or need?”

Dick said the city could potentially use $3,000 to remove the existing bike lanes on St. Aubin – some of which end suddenly without connecting to other bike paths.

“(The) Department of Public Works has not confirmed if the St. Aubin bike lanes will remain or be removed,” he said. “Community feedback will be incorporated into their decision.”

Claire Nowak-Boyd, outreach manager for Transportation Riders United, a nonprofit transit and mobility advocacy group, said she’s eager for the cut to be extended north and plans to keep that extension and the Joe Louis Greenway as a whole, open 24/7.

“The Dequindre Cut trails are transportation, just like a road for a car is and it’s kind of not fair that this very safe way to walk home, to bike home, just closes before entertainment closes, before third shift workers get off work and things like that,” she said.

Nowak-Boyd added however that she does have some concerns, mainly biker safety at Mack Avenue where the street begins to narrow at the end of the Dequindre Cut.

“Aggressively protect those bikers and walkers because they’re going to need it the way the road is there,” she told city officials during last week’s meeting. “I almost wonder if that could be changed in some way or like move the narrowing a little further west so it’s not immediately before the cut.”

Hanan Yahya, another manager for the greenway project, said many of the safety features from the existing Dequindre Cut will be incorporated in the extension.

“(This) includes emergency call boxes, adequate lighting, making sure there are safe street crossings, and of course, the call boxes do have cameras as well as multiple access points (to the path),” Yahya said. “So there won’t just be an entrance and an exit at the end.”

Construction on the Dequindre Cut extension is expected to begin in 2023, according to Peltier.

The Detroit Riverfront Conservancy manages the Dequindre Cut and expanded it by about half a mile from Gratiot Avenue to Mack in 2016. The cut, a former Grand Trunk Railroad line, first opened to the public in May 2009.

The city’s riverfront attracts about 3.5 million visitors each year, according to the conservancy, which has invested more than $200 million toward revitalization efforts.

The next citywide community outreach meeting on the greenway will be held virtually Sept. 26. You can learn more about the overall project at the Joe Louis Greenway website.

authored by
First published at https%3A%2F%2Fwww.bridgedetroit.com%2Fare-detroiters-being-heard-on-historic-investment-in-neighborhoods%2F

Jared Goff has had ‘nice camp’