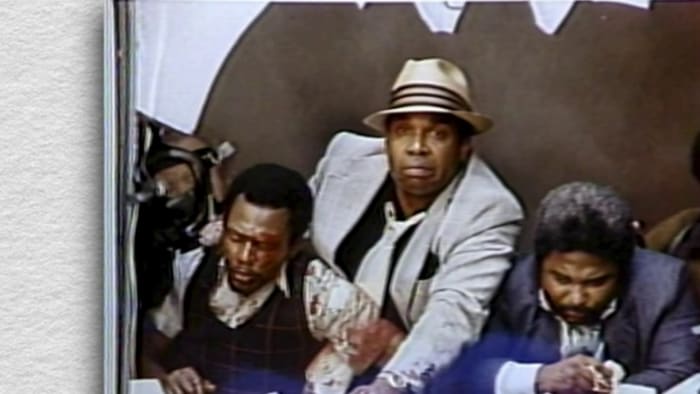 Forty years ago there was a deadly massacre at the Buhl Building in downtown Detroit.

Video and pictures from June 11, 1982 show a fiery and bloody assault on the building’s 8th floor.

Sunday Read is ClickOnDetroit’s Sunday news review to help readers catch up on some of the most important topics of the week.

The video and pictures from June 11, 1982 in Downtown Detroit are as unnerving as they are impressive. A fiery and bloody assault on the Buhl Building’s 8th floor that morning far outstrips anything the most creative Hollywood script writer could ever conjure.

Then 35-year-old Detroiter Robert Leonard Harrington sawthed with anger as we awaited the last of a series of $2,500 insurance payments due to him from the Bell and Hudson Law Firm. The firm was a high-flying one, serving well-known celebrities , politicians, and drug kingpins.

Obviously expecting to hear his money was still not available long after he wanted, Robert jumped aboard a downtown bound city bus riding for an hour wearing a trench coat in the summer heat. Underneath he carried a shotgun he sawed the stock from, a jar of gasoline with matches in one pocket and a handgun in another.

Robinson’s then wife knew there was trouble brewing. She jumped on the phone and called Robert’s brother Gerald Harrington, a vice president of a local bank who worked downtown. She pleaded with him to head to the Buhl Building and intercept his brother. Knowing Robert suffered from mental illness, Gerald headed off to the Buhl, arriving minutes too late.

Unfettered, Robert rode the elevator to the Buhl’s 8th floor. At the Bell and Hudson front desk he demanded his money. When the answer came there was none, he flew into a murderous rage. He uncovered his shotgun and pumped five shots into the chest of 25-year-old law clerk/intern, Eve August. She died immediately.

Everyone scattered in the office as Harrington kept racking his shotgun gun and firing at anything and everything. He blew open an office door, shot at a massive wooden desk. Hiding underneath the heavy family heirloom was then 27-year-old attorney Doug Wartell. He cowered, rightly thinking he was about to die when he heard glass breaking. Uncertain what was going on, he watched in concurrent terror and joy as Harrington moved around to the back of the desk holding his shotgun.

Wartell realized Harrington had spilled gasoline on his trench coat and it caught fire while he lit the Molotov cocktail. As Harrington’s attention turned from patting down the flames on his arm, Wartel took his chance and ran as fast as he could out the door and out of the building.

Forty years later, Warell told Local 4: “I just thought maybe someone in our criminal section was unhappy with the result of something. I didn’t really think I personally would be a target. But, it looked like, ya know, the guy was just trying to wipe out the entire office. He was making sure that nobody else is going to be alive and that was scary.”

The Buhl employed an armed security guard. He ran to the 8th floor and discovered Robert Harrington arguing with his brother Gerald. In the confusion the guard suffered a head wound but survived. Gerald was trying to convince Robert to give up his gun and somehow was able to get the gun from Robert. But, it almost cost him his life.

While standing there holding the shotgun, an armed private investigator came from another office. Thinking Gerald was the rampaging gunman, he emptied his revolver in Gerald’s direction. Amazingly, none of the shots hit home. Robert and Gerald retreated into the law offices.

At the very same time, Wartell ran out of the Buhl and called 911. Detroit Police Detective Sergeant Tommy Robinson was on his day off and enjoying the Detroit River at Hart Plaza. He heard the call of the shooting and fire on his police radio. Immediately, he moved toward the Buhl looking to offer whatever help he could. He rode the elevator to the 8th floor and heard gun shots. He pulled out his service revolver holding it at his hip, took a deep breath and went inside. He now admits in the heat of the moment he forgot one corner of his police academy training. In barricaded gunman situations, police are supposed to gather on the above floors and below. Instead, he walked right into the middle of Harrington’s rampage.

Robinson told Local 4, “I heard some more shots. When I heard the second shot, the officer manager ran out of the office and down the stairs. I couldn’t blame him because if I had the opportunity I would too! I now had the obligation to do police work at the 8th floor.” He added, “I knew it was time to go to work and said ‘well this is it’”.

As he approached a law library, “I opened the door and I saw the shotgun on the floor. I wanted to get the shotgun, then I thought no, maybe it’s got prints on it. It can be used for evidence. That’s when I saw his brother [Gerald Harrington]. Then I opened the door a little wider and I saw the other brother Robert Harrington on the floor, he had a crease, he had an injury on his forehead. But his eyes were very red, very red. I said ‘you two, if you move I’m killing you’”.

At this point both brothers became cooperative. As the smoke grew thicker making breathing difficult, Robinson ordered the brothers to throw chairs out the windows to bring in some fresh air. They complied. Robinson had only one pair of handcuffs so he tied both men together by their left hands. They moved together to the window.

While they stood there, the Harrington brothers battered and bleeding, a photographer in a building across the street shot a most famous picture of the event.

Photo from the Buhl Building. (WDIV)

Detective Robinson looked directly into the lens, his fedora perfectly in place, and told Local 4, “I noticed a lady across the street in a building with a camera taking pictures. I said I don’t need pictures. I need some help!” Robinson wondered how I might get out of this most dangerous situation. Climbing down telephone wires from the office was one idea he had and rejected. He said “I’ve been in some tough situations before, I’ve been in similar situations, but this is the toughest I’ve ever been in.” “I don’t think I’ll make it this time” he remembers thinking: “I just hoped the department takes care of my family for me.”

After what seemed like hours, firefighters arrived and brought them all to safety.

In all, nearly three dozen people from the law firm and other businesses in the building needed rescue. There was one death, five others ended up shot and, in an attempt to escape the flames, two attorneys jumped three floors to a nearby rooftop. One wound up severely injured and spent the rest of his life in a wheelchair. The other suffered head injuries that also impacted him permanently.

Robert Harrington went on trial, charged with murder, attempted murder, Arson, and felony firearms. His defense used an insanity plea to no avail. The judge sentenced him to life in prison without parole.

In 1985, while in Jackson Prison, the Michigan Department of Corrections tells Local 4, Harrington attacked a guard with a steel shank. He slit the guard’s throat and stabbed him several times in a fraught jail cell struggle. For this, another judge added 20 more years to Harrington’s life sentence. Strangely enough, Harrington wasn’t finished in courtrooms. His original murder case ended up overturned and re-tried because the original judge’s jury instructions transposed the word “or” with “and”.

On that simple error Harrington received a new trial and once again was found guilty. He is currently serving his sentence at the Chippewa Correctional Facility in Kincheloe, Michigan. That’s located in the Eastern Upper Peninsula. Here is his MDOC mug shot.

Many of the survivors of this terrible attack have passed away. One survivor told us it’s taken years of therapy to put this day behind her saying, “I almost died three times that day” and did not want to be part of our coverage.

Still, this terrifying shooting spree and fire forged one amazing and lasting relationship.

Detective Tom Robinson met Eve August’s brother Lou at her funeral. They agreed they would meet every year on June 11th outside the Buhl Building as a memorial for Eve. They have kept this appointment every year, including 2022. As a result, they have grown to be the best of friends.

Lou told Local 4 he struggled with his sister’s death. But his long journey toward peace of mind included corresponding by mail with Harrington. Over time, Lou made the impressive decision to personally forgive Robert Harrington. Tommy Robinson said of this development “He wanted to go see Robert Harrington to tell him that he had forgiven him for what he did to his sister. He said, do you want to go? I said sure, I’ll go with you.” They never made that trip though. Lou telling Local 4 the prison warden refused to allow it. Harrington is mentally ill and probably would not understand.

Tommy Robinson said looking back, “I thank God for giving me my life back to be because I knew I was finished.” He says he reflects often on that fateful and sad day and “I say a short prayer for myself and my family and for Lou August and his family.”

The August family wanted the world to know what a bright light Eve was. They created a scholarship at the Detroit College of Law in her memory. Michigan State University took over the school and what is now called the Eve August Moot Court Scholarship and it is still handed out each year on the University’s list of Professor Recommended Scholarships.

Today, one would never know about this event driving down Congress. The building long since repaired and the shooting rampage largely forgotten except for those who plaintively asked firefighters to hand up a ramshackle ladder to help them get away from the gunfire and flames.

Bonus: Returning to the scene with Roger Weber, Detective Robinson

A look back at the attack on the Buhl Building in Detroit in 1982.

From the Vault: 1982 coverage from attack at Detroit’s Buhl Building

In this WDIV archive footage from 1982, a deadly attack inside the Buhl Building in Downtown Detroit.