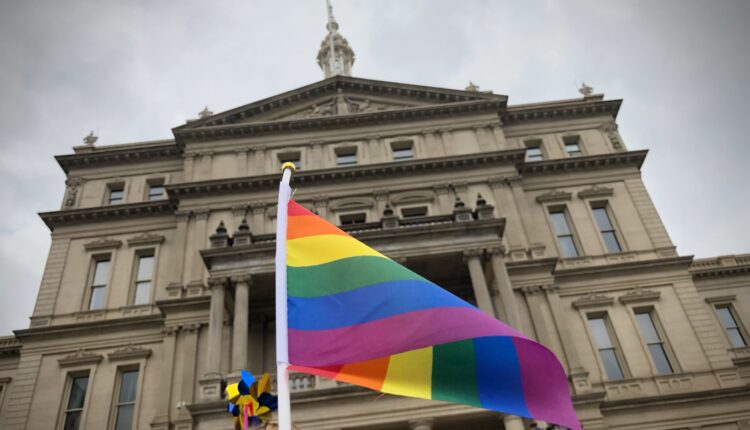 Following the high-profile rejection of a Pride Month resolution in the Michigan Senate last week, and amid a historic rise in anti-LGBTQ+ rhetoric, three LGBTQ+ state lawmakers told reporters Wednesday that they are having to maneuver in the GOP-led Legislature’s “toxic atmosphere.”

“This agenda that they have of division prevents us from getting other work done on behalf of the people of the state of Michigan,” said state Sen. Jeremy Moss (D-Southfield), the first openly gay senator in Michigan.

During the virtual press conference with reporters Wednesday, Moss, state Rep. Laurie Pohutsky (D-Livonia) and state Rep. Tim Sneller (D-Burton) all spoke about their efforts in both chambers to recognize June as Pride Month.

In the state Senate, Republican leaders have repeatedly delayed a vote on the measure and eventually sent Moss’ Senate Resolution 149 to the Government Operations Committee where many bills languish. No reason has been given for leadership’s refusal to take up the measure, despite the Senate passing it last year.

Majority Leader Mike Shirkey (R-Clarklake) said the measure failed because Moss would not accept Republican amendments to it. But those amendments implied being gay is a choice, Moss said, so he refused to add the language to it.

“It is absurd that, rather than just accepting the fact that they tried to force bigoted language into this resolution and owning it, they are trying to pass the buck and blame Sen. Moss. That is shameful,” Pohutsky said.

Shirkey had sought to remove language about the “slow and insufficient” government response to the HIV/AIDS crisis, then add a disclaimer that “not every citizen in Michigan agrees with the lifestyle of the LGBT community.”

“The other side is seeing some lift-off politically by preying on people’s fears and sowing division, [and] they’re going to make this another campaign cycle where the LGBTQ community is going to be a political punching bag,” Moss said. “…It has dangerous implications to the community.”

In Michigan and across the country, GOP lawmakers have been embracing a pushback on gay and transgender rights that extends to anti-LGBTQ+ misinformation from elected officials, anti-trans bills in at least 20 state legislatures and a crackdown on once-bipartisan measures that support LGBTQ+ rights.

In April, state Sen. Lana Theis (R-Brighton) named Sen. Mallory McMorrow (D-Royal Oak) in an email that appeared to accuse her and other Democrats of “grooming” children by supporting LGBTQ+ rights.

Moss had attempted twice before, in 2019 and 2020, to get the Pride Month resolution passed before finally achieving success in 2021.

In the House, a measure was eventually passed recognizing a week for Pride rather than a month due to some procedural and time issues. Pohutsky said that the voice vote was not without vocal pushback from the other side. “There were some yeas, and then there were some very, very, very visceral nays,” Pohutsky said. “I really want to stress how unusual that is. That is reserved for very polarizing topics.”

She said it was concerning to have such a reaction to a measure recognizing the existence and rights of a community.

“There is a small group of LGBTQ staff who meet to discuss legislation and to just bond, and it hurt my heart when that happened,” as they may feel unwelcome in their workplace, Pohutsky said.

On accepting a week for Pride under those conditions rather than no recognition at all as in the Senate, Sneller offered a comparison: “When you go in there and you’re offered death, be grateful you leave as an amputee.”

Sneller said he was thankful that they were able to declare a commemoration of Pride at all in the House, as compared to the state Senate, and especially since the week will encompass June 28.

House Speaker Jason Wentworth (R-Clare) appeared as an unexpected ally through the process of passing the Pride Week measure, as he apparently had to work hard behind the scenes to whip the necessary votes, the lawmakers said during Wednesday’s press conference.

Pohutsky and Sneller stopped short of calling him an ally to the LGBTQ+ community, and said they often do not agree with his policy views, but said that they are grateful for his help.

Pohutsky said he is an ally in “trying to get the actual work of the Legislature done in the House” and not letting some of the GOP members make the measure into something controversial.

“I came out at a very privileged time where people were still — may still had had bigoted takes, but it wasn’t as open as it is now. We are seeing people dig back down into these groomer attacks and saying that children are at risk. Those were attacks that haven’t been used in over a decade,” Pohutsky said. “And now they are mainstream, they are being embraced by people, and those could absolutely have deadly consequences.”