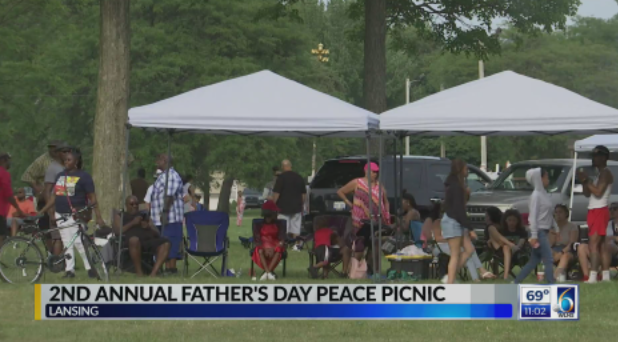 LANSING, Mich. (WLNS) – Warm weather, food, fun and fellowship. That was the scene at the 2nd annual Father’s Day Peace Picnic hosted by The Village Lansing.

“We wanted as The Village to recognize the fathers involved out here in this community but also to show that we can all come together and not have any issues so that’s why we attached the peace picnic process to it,” Michael Lynn Jr. said.

This event was put together to honor fathers and show them how much they are appreciated. Fathers like Dwann Arthur.

He said his children mean a lot to him.

“My three babies are my world. I had my oldest after I lost my cousin then I had my daughter after I lost my grandma then when I lost my uncle I had my youngest. So they mean everything to me. There’s nothing that I wouldn’t do for them,” Arthur said.

Michael Lynn Jr organized this event through The Village Lansing. It’s a non-profit geared toward putting an end to youth violence and giving back to those in need. Like the group’s name, Lynn said it takes a village to raise children.

“The Village really was originated to uprise the community to get involved with each child out here. We can’t act like that’s their kid or that’s their kid, they’re all our children,” Lynn said.

This free event had family fun for all ages including musical performances and cash prizes. Organizers said the goal of this picnic was not only to honor fathers but also to peacefully bring the community together and provide a good example for future generations on how to do what’s right.

“We got a lot of young men that we coach and that we’ve been watching grow up that have kids now. So we like to show them how we move, so they can see how they need to move. Show them some unity, love on each other and show them how they’re supposed to act,” Aaron Blankenburg said.