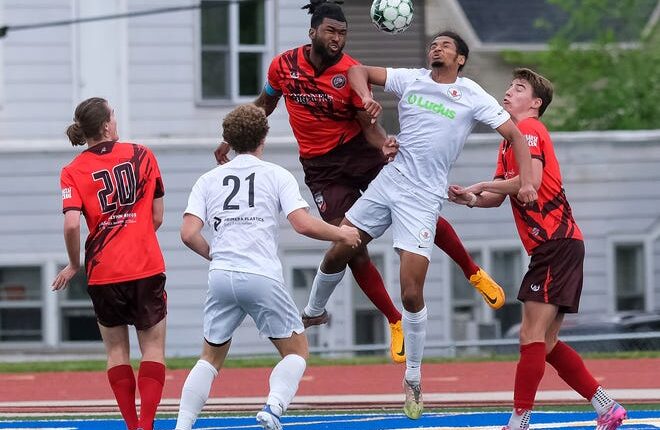 On June 12, the Lansing Common Football Club began a stretch of games where it plays 11 matches in 41 days, ending on July 23.

And the Robins are catching fire just as the schedule heats up. They’ve won three straight matches, beating the Michigan Jaguars, 2-0, on June 12; Detroit Union, 5-1, on Wednesday; and Cedars FC, 4-2, on Saturday.

That three-game winning streak has shot LCFC all the way up to second place in the Midwest Premier League standings after Saturday’s matches.

Starting Tuesday, the Robins will embark on a journey with a little different flavor than playing the MWPL.

LCFC will participate in the NISA Independent Cup, a 36-team competition made up of nine NISA professional soccer clubs and 27 semi-professional teams from various leagues throughout the country.

Lansing Common received an invitation after being the highest finisher in the Midwest Premier League last season that was not affiliated with another club. The Detroit City U-23s won the division last year as the Robins finished second.

There are nine regions in the NISA Cup, and the winner of each region will take on a NISA team to complete its run in the cup.

Lansing will take on Metro Louisville FC and FC Milwaukee Torrent in a round-robin group stage, and the group will take on the Michigan Stars on a to-be-determined date.

Lansing will host Metro Louisville at 7:30 pm Tuesday at Eastern High School. It is also the cup’s opening match.

“Our guys from last year, they were excited that they had earned that opportunity. This is something we earned on the field that we now can participate in,” said LCFC president Eric Walcott.

Players to watch:These are 5 players you should know on Lansing Common

“It’ll be cool to compare ourselves going up against a UPSL team and an NPSL team. Louisville this year had a really good season and Milwaukee typically has been pretty good.”

There is also prize money involved. The club would receive money if they finish atop the group, and also if they were to beat the Michigan Stars.

“It gives it a little more than just, hey, we get to play against a pro team,” Walcott said.

The Robins play at Milwaukee on July 15.

The Robins sit with a 3-1-1 record, five points back of leader Inter Detroit. But they do have a game in hand.

“We’re building some momentum,” Walcott said. “Talking to (coach Josh Oakley) early in the year, he said it’ll take us 4-5 weeks to jell and we should have a good, solid team. And they seem to be arriving right on schedule with that prediction.”

To achieve justice, our fight against lead poisoning has to go beyond prevention ⋆