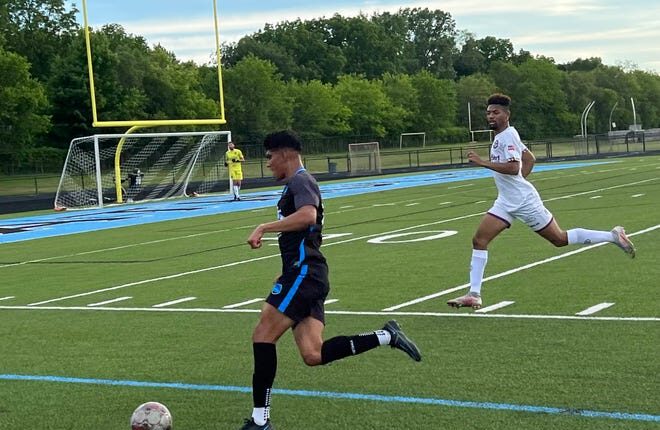 There have been a few high points this season for Lansing City Football, most notably a pair of wins over then league-leading Kalamazoo FC during a seven-day stretch earlier this month.

But City, amid its first year as a soccer club and playing in a competitive USL League Two, has also seen its share of lows this season. And coach Marco Bernardini isn’t afraid to point that out, as his squad lost for the sixth time in eight matches on Monday night, falling to Oakland County, 4-1.

Oakland County has presented a little bit of a problem for City this season. Eight days earlier, City suffered a 4-2 setback to OCFC.

Keith Larson and Kevin Buca scored two goals each for Oakland County on Monday. Larson also had a brace in the June 12 match, and Buca added one goal.

City’s lone goal Monday came from Andres Lua, his second of the season. The University of California-Merced’s other goal came in the June 12 game against OCFC.

“He’s a really good player and he’s played very well in the last few games,” Bernardini said. “He got a really good goal tonight, (but) we just need more quality from the team throughout the whole game.”

As part of the four-match losing streak to start the season, City was shut out in three of those after losing 3-2 to AFC Ann Arbor in the opener, getting goals from Beck and Shady Omar. Omar, a Haslett High School and Eastern Illinois graduate, has been out the last few weeks with a hamstring injury.

Santiago Aguiar, Nathan Ntalu and Jack Zugay all have one goal apiece this season.

Monday’s match was the second true home game of the season for City, which are now played at Lansing Catholic High School. They were initially supposed to be at Hope Sports Complex, but the field was ruled to fall under the league’s standards. City had to play its first two “home” games at Spring Arbor University, where Bernardini is the men’s soccer coach.

“There have been a lot of factors we’re fighting all the time as a first-year club, but we’ve got the people here to keep improving and keep chasing it. And we’re gonna keep going,” Bernardini said.

City has three more home matches this season: vs. Midwest United on July 6, vs. Oakland County on July 8, and Flint City on July 13 in the regular-season finale.

Lansing City is currently fifth out of six teams in the Great Lakes Division with six points, 10 points back of league leader AFC Ann Arbor.

“We faced a lot of adversity early on in the season,” Bernardini said. “We play in a really difficult division and that’s why we joined this league. We’ve made big strides in the past two weeks to show a lot of improvement and get results against one of the top teams in the division. So we know what we’re capable of. We’ve shown what we’re capable of. It’s about how can we be consistently at that level.”