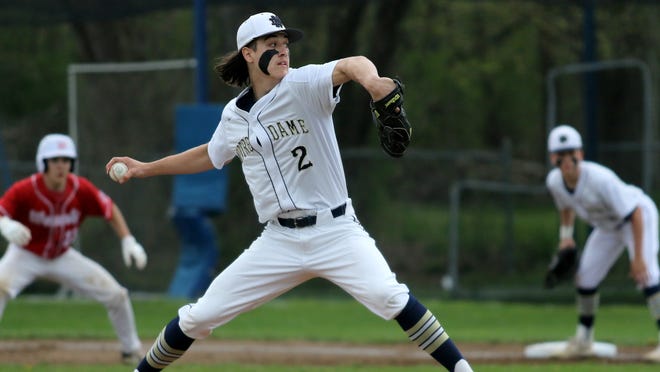 Lansing responded to Elmira Notre Dame’s seventh-inning rally with three runs in the top of the eighth inning for a 7-4 victory in the Section 4 Class C baseball championship game Friday at Mirabito Stadium in Binghamton.

The tiebreaking run in the eighth scored when Carson Crandall was hit by a Luke Richards pitch with two outs and the bases loaded.

Mark Maybee made it a 6-4 game with a bases-loaded walk and Jaxson Mayo followed with an RBI single.

Notre Dame was down to its final out in the bottom of the seventh, trailing 4-2. Steven Gough tripled to center field to drive home Jahmeire Keyser and Luke Meisner followed with a tying single on a hard ground ball that just eluded Crandall at first base.

The top-seeded Crusaders finished with a 16-6 record.

UMass-Lowell signee Zack Sperger went 2-for-2 with two runs and an RBI for the second-seeded Bobcats. He walked three times, including twice intentionally. Mayo went 2-for-5.

Sperger was also the winning pitcher despite surrendering nine walks. He went 7⅔ innings, allowed seven hits and struck out three. Maybee came in to record the final out after Sperger reached the 125-pitch limit. Rules allow pitchers to complete an at-bat after they reach the limit and Sperger ended up throwing 130 pitches.

Keyser and Owen Stewart each had two hits for the Crusaders, including an RBI double from Stewart. Meisner drove in two runs.

Play begin at 10 am, with the start time moved up three hours because of the threat of inclement weather.

The Bobcats turned three double plays, the final one coming in the bottom of the eighth after Ashton Colunio walked to lead off the frame.

Stewart, a senior who will play at George Mason University, closed his dominant season by striking out 12 and walking three while surrendering five hits in 6⅔ innings. All four runs scored by the Bobcats were unearned. Stewart left after reaching his pitch limit and ended up at 129 pitches.

His pitching numbers this season go down among the best in New York state history. Stewart tossed four no-hitters, one shy of the state record, and allowed one earned run in 59⅓ innings for an ERA of 0.12.

Stewart finished with a 7-0 record and 134 strikeouts while surrendering only 14 hits and 22 walks. He batted .431 with two homers among his 10 extra-base hits in 72 at-bats.

Lansing (15-5) will face the Section 3 champion in a state quarterfinal at 6 pm June 4 at Onondaga Community College in Syracuse.