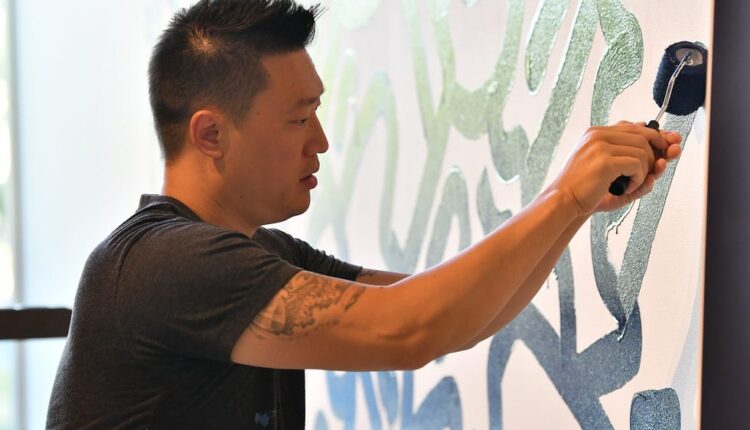 There are no mistakes in Detroit artist Mike Han’s work.

His thick, bold strokes, often made with a type of calligraphy paint and inspired by a mix of Korean calligraphy and street art, unfold organically on every wall or canvas he paints. He doesn’t even sketch his paintings or murals first. Hey just paints.

“Everything is unplanned,” said Han, 38, who refers to himself as a “modern vandal.”

But mistakes, even outright failure, were a part of Han’s life for years before he turned to art. The Detroit-based former sushi chef and entrepreneur tried four times in 10 years to open restaurants in southeast Michigan, but they all closed after a period or didn’t get off the ground.

It was a private commission to paint a mural in an Oakland County home during the height of COVID in 2020, at a time when Han wasn’t sure how he’d even pay his bills, that finally pushed him to fully pursue art.

And now his career is booming. He’ll debut a new sunglass collection with SEE Eyewear in mid-September, and also has been tapped to paint on vintage ads for Bloomingdale’s that will hang in five windows of their flagship store in New York.

“That mural saved me,” Han said. “It paid for my bills and was the impetus for me that I needed to figure out how to mark art for a living.”

Han, meanwhile, says he celebrates “the journey” from the restaurant industry to art. As painful as it was, it gave him the tools he needed to develop as an artist, he says.

“Once I was forced into this position that it was either now or never, (I) had to forget being scared if people are going to like it or not or if I’m going to make it enough money because I’m going to get evicted anyways,” Han said. “It was really nice not having the safety net. Without that, I went for it. I took big risks and they paid off.”

And they did. Han has been commissioned to create pieces in homes and businesses all over Metro Detroit.

Mary Wysocki, a local art consultant with Paragon Art Collective who met Han last year when the two worked together on mural commission for a luxury car storage facility in Royal Oak, said Han’s work blends with so many aesthetics.

“He puts his heart and soul into his work,” she said. “And the line work is so bold but so clean. And I think it translates to many people. … It has such a street vibe, but it’s an elevated street vibe. It has an elegance and simplicity that takes it above and beyond graffiti.”

And as his art career takes off, Han is committed to giving back, too. He’s helped raise more than $150,000 for charitable groups throughout the years.

At an event this summer at Gardner-White Furniture’s Canton Township store, customers watched as Han painted a large mural on-site as part of a fundraiser for Detroit Excellence in Youth Arts Fund at the Children’s Foundation. Limited edition prints of that mural are available for sale through Gardner-White’s website.

For Han, a proponent of sustainability who thinks a lot about how people and the planet are connected, giving back is “a really dynamic way for me to live what I believe.”

Han was around the age of 4 or 5, living with his family in Connecticut, when his father, who worked for the renowned design company Knoll, took him to a Keith Harring pop-up show in New York’s Soho neighborhood. The experience stayed with him.

“He exposed me to sushi and art, and I just kind of had this natural instinctive appreciation for graffiti,” Han said. “All of that stayed with me.”

But it wasn’t until Han was in college — his family had moved to Michigan by then — at Purdue that he got his first opportunity to make sushi at a Korean Japanese restaurant.

It was just the beginning. He began working at a sushi restaurant in Ann Arbor and eventually worked all over the country, including Los Angeles, Chicago, Denver and Miami, creating sushi.

He “painted in between,” said Han, who did the Woodward Windows Project for a couple of years in Detroit as he pursued getting a foothold in the restaurant industry. But “I’d go back to sushi as the stable income.”

Still, he struggled. Of the four times he tried to make a go of it in the restaurant industry, they all failed. His restaurant, Pursue, a sustainable Korean restaurant, located inside what was once the Fort Street Galley, folded after five months in 2019.

He was on the verge of opening a sustainable sushi tasting menu concept in 2020 when COVID-19 hit.

Laid off and unable to get unemployment through the state because of a computer glitch, he got a commission to create a mural in a home in Oakland County. He wouldn’t have been able to pay his bills without it, he said.

“It was a mural for their kids’ room. I got to create something that was fun for the parents but also for the kids,” he said.

‘Your time will come’

Today, most of Han’s work — which explores his heritage as a Cheongju Han, a royal Korean clan known as House of Han whose lineage dates back more than 1,000 years — does mostly commissions, both commercial and residential. He often paints his murals directly on the wall, part of his commitment to sustainability, which always “carries an element of fear and risk,” he said.

But the joy he feels when each piece is done is worth it.

“That transformation from being anxious to joy — that’s why I want to do this for the rest of my life, to be reminded every time I do it, that if I want to live my best life, I’ve got to take risks, “Han said.

Chris Davis hired Han in 2021 to create a large mural in his luxury car storage facility in Royal Oak called the Stash after meeting him through Wysocki, the art consultant.

Uninterested in decorating his 14,500-square-foot former manufacturing building with car art, Davis wanted something different to elevate the space. Han painted one large mural across a 140-foot wall and then three canvas overlays, which he did all on-site. The colors, burgundy, blue and hunter green, are taken from the terrazzo floor.

“It seems simple but it goes anywhere,” said Davis, who has gone on to purchase several more of Han’s pieces for the Stash, including blueprints from the Packard plant that Han painted on.

But even with Han’s art career taking off, food will always be a part of life. As he painted his mural at the Stash during a week last year, he also carefully plotted out where he and his crew would eat for lunch every day.

“He had it all planned out,” Wysocki said.

Han’s career trajectory, meanwhile, will come full circle this fall moment when he does an event for his new sunglass collection in Soho, the same place he saw Harring’s pop-up shop as a kid. For anyone looking to make a big career change or who’s faced failure, Han’s advice is “get back up,” be resilient, but also be patient.

“If you’re working in your purpose and passion and giving your all, there’s never going to be a time when you know, ‘OK, this is my time,'” Han said.

“Every time I’ve done something in the past, I thought I was in it. Things were going to be happening. They were always short-lived. They didn’t bring me the outcome I wanted. It was heartbreaking every single time . But if you’re really focused on your passion and purpose, you have your whole life. Your time will come.”