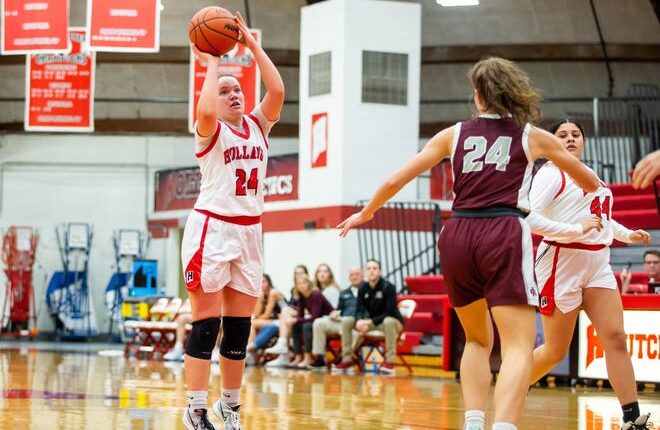 Holland continued their hot start to the conference with a 68-45 win over Grand Rapids Union on Friday night at the Dome.

Holland started the game on an 11-0 run and never looked back. In the second quarter alone, they scored 25 points.

“In the first half the shots really came for us. Our defense made turnovers and we were lucky to convert those into baskets. This team really came together to play as a unit. I’m so happy after all that “It’s a great reward for them to see the hard work they’ve put in. Seeing them celebrate victories with their students and teammates is a great reward,” said Holland coach Dan Telgenhof.

The Dutch were led by Ari Gray with 18 points. Julia Kooyer added 12 while Amaris Russell put in 10 chips. Ellie Zomer had nine, and Beka Stilwell and Emily Telgenhof each added six.

Holland advance to 7-1 overall and 3-0 in the OK Green. Holland is in Muskegon on Tuesday.

The Hawkeyes clinched another conference win on Friday night with a 57-39 win over Unity.

Taylor VanderZwaag led the team with 16 points. Kaitlyn Geurink added 14 of his own while Kyra Kleinheksel was just behind on 13 points. Jessica Berens also scored nine points.

“The switching offensive worked really well for us in the first half, that was the main reason we went into the half with 36 points and an 18-point lead,” said Hamilton coach Jacquelyn Schwark. “Everyone did their job, whether it was running the ground, pushing with a pass, or landing strong on the edge. Defensively, we knew Unity had a lot of quick guards and we implemented the game plan to keep them out of the suit very well.”

The Rockets hit a late 3-pointer to form the final cushion in the fight for OK Green.

The Dutch cut the Union lead to five in the third quarter but struggled to take shots down the stretch.

Brant Goodpaster led the Hawkeyes by eight points in the OK Blue loss.

Senate filibuster on voting rights criticized by advocates for the poor ⋆