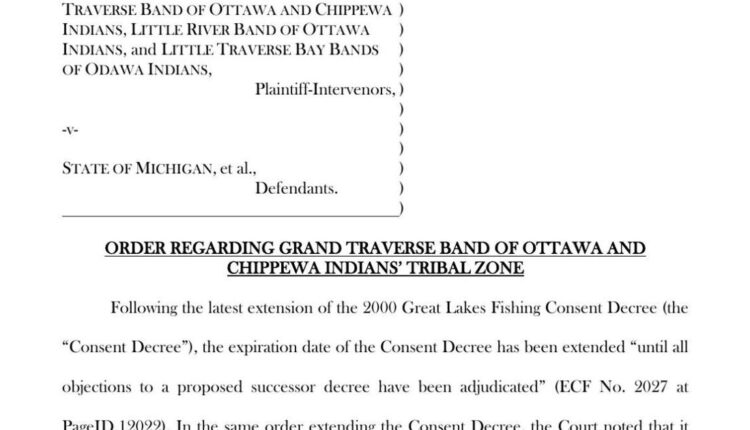 TRAVERSE CITY — A Michigan federal judge’s order grants the motion for the adoption of the Grand Traverse Band of Ottawa and Chippewa Indians tribal zone provisions.

In the same order extending the Consent Decree, US District Judge Paul Maloney granted the motion made by GTB regarding gill net permit requirements in tribal fishing zones for the sovereign nation.

This reaffirms GTB citizens the use of traditional gill nets in Michigan and Superior lakes that include the West and East Grand Traverse Bays, and Good Harbor Bay off the Leelanau Peninsula.

Both will continue to be managed by harvest limitations, meaning an additional 900 feet of gill net effort per day will not imperil the fishery, the court said.

Permits will be required for Tribal commercial fishers using gill nets in newly opened areas of Good Harbor Bay for the first three years after the successor decree takes effect.

The effort will be limited to 4,500 feet of gill net per day in the West and East Grand Traverse Bays of Lakes Michigan water. All Tribal commercial fishers must share the permitted amount of daily gill net effort in each grid, and each grid is 10 nautical miles by 10 nautical miles.

William Rastetter, of Olson, Bzdok & Howard, PC, and Tribal attorney for GTB, said the federal court’s decision is vindication for GTB’s treaty-reserved rights that include access to traditional fishing grounds adjacent to reservations selected in the 1836 and 1855 treaties. Under the Constitution, those rights are superior to the privilege of non-Natives licensed by the state, Rastetter said.

The treaties were ignored by Michigan regulators until a landmark federal court decision in 1979, that led to agreements in 1985 and in 2000 that sets out tribal fishing zones in parts of Lake Michigan, Lake Huron and Lake Superior for five sovereign nations, and divide equally lake trout and whitefish stocks between state-licensed fisheries and the five sovereign nations.

After GTB and the state of Michigan reached a stalemate in their negotiations regarding the Grand Traverse Tribal Zone provisions in the proposed successor decree, the court ordered the state and the sovereign nation to present separate proposals regarding GTB’s Tribal Zone for the court’s review.

Oral arguments were heard from the state and GTB on each of their proposals. Counsel for the United States also appeared, recommending adoption of GTB’s proposal. The court stated that decision rests on the well-settled law of the case, “that any state restrictions on Tribal fishing rights under the 1836 Treaty must be the least-restrictive regulations necessary for the conservation of the Great Lakes fishery.”

“We’re gratified with the court’s decision, but it’s also a reminder of how disrespectful the state (MDNR) has been to the Tribe (GTB),” Rastetter said, citing litigation in 1995 between the Department of Natural Resources and GTB, when GTB prevailed.

The courts declared that GTB tribal fishers have the right to transient use of the Leland and Northport marina facilities, and mooring slips with impoundment gear and fish for chubs, unload nets, off-load fish, and seek shelter during emergencies to access traditional fishing areas on the east side of the Leelanau Peninsula.

GTB’s treaty-reserved rights include the traditional fishing grounds adjacent to reservations selected in the 1836 and 1855 treaties, as declared by the federal courts.

Rastetter made note of the GTB’s agreement to maintain the basic allocation of lake trout. He said the result — GTB commercial fishers will continue to harvest far less fish because of the collapse of highly-sought whitefish stocks, which were the primary target of netters in 2000 when allocations were set.

Rastetter said GTB has been reasonable in the negotiations.

“In much of the treaty-reserved traditional waters, GTB has agreed not to fish with nets in the summer months; and GTB hasn’t demanded a greater share of fish to make up for almost total collapse of the whitefish since 2000. Despite having a superior claim, GTB is being a good neighbor.”

Efforts to contact the Michigan Department of Natural Resources were unsuccessful Thursday.