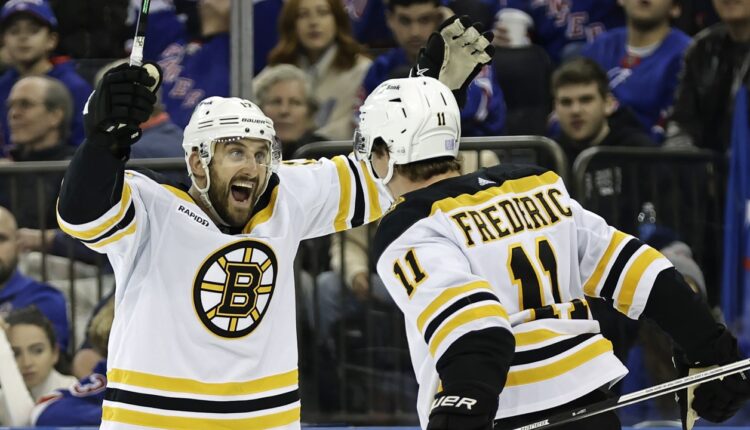 David Pastrnak, Charlie Coyle, Jake DeBrusk and Hampus Lindholm also scored for the Bruins, and Nick Foligno and Taylor Hall each had two assists. Linus Ullmark had 18 saves to help Boston improve to a franchise-best 10-1-0 under new coach Jim Montgomery.

Jimmy Vesey and Adam Fox had goals for New York, and Kaapo Kakko had two assists. Igor Shesterkin had 32 saves.

DETROIT (AP) — Alex Ovechkin tied Gordie Howe for the most goals scored for one NHL team, but Andrew Copp had the go-ahead goal with 3:50 left to lead Detroit past Washington.

Ovechkin broke a scoreless tie midway through the second period, giving him 786 goals with Washington to equal Howe’s total with the Red Wings.

Detroit’s Lucas Raymond pulled the Red Wings into a 1-all tie late in the second period on a power play. Copp scored his first goal in his 10th game with the Red Wings late in the third off Adam Erne’s behind-the-net assist. Dylan Larkin added an empty-net goal in the final minute to seal the victory.

TAMPA, Fla. (AP) — Sebastian Aho scored in the sixth round of the shootout to lift Carolina.

Tampa Bay’s Ross Colton and the Hurricanes’ Teuvo Teravainen both scored in the fourth round of the tiebreaker.