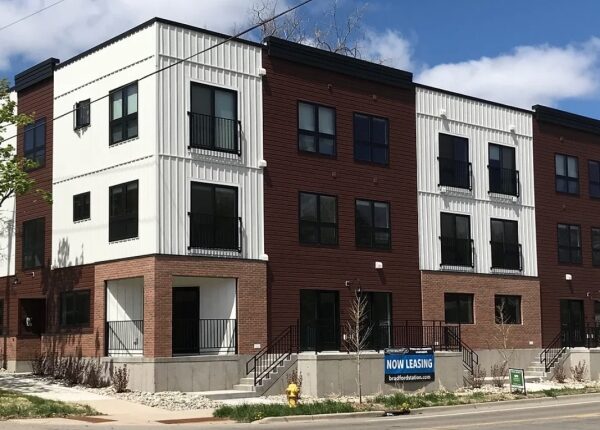 The Grand Rapids-based construction firm in early 2021 completed the 16,500-square-foot Bradford Station, which the company says is the first carbon-neutral apartment building in the city.

Bradford Apartments GR LLCwhich is registered to CIG Management LLC President Jay Johnson, purchased Bradford Station on May 5 from a Bazzani affiliate, according to property records. Johnson did not immediately respond to a request for comment.

The Chicago-based property management company also has a presence in Kalamazoo, where it owns Mansard House Apartments.

The 23 apartments in the 16,500-square-foot building use about 50-percent less energy than a standard new apartment. The project is compliant with the Grand Rapids 2030 District and also is certified Net Zero Carbon by Net Zero Analysis, which means it offsets all of the energy that it consumes.

Building a net-zero project not only makes sense for environmental reasons, but it also generates financial benefits, Coyne said.

Since Bradford Station was completed more than a year ago, the apartment complex has remained full from high demand and a central location to Medical Mile, Coyne said.

“When you finish a project like that and people start to move in, that’s really fun and exciting,” Coyne said. “That’s a lot more of the excitement than it is necessarily to own it. We got this offer and it was a very good offer. The money we ended up getting from Bradford Station will allow us to do future projects.”

Bazzani also is finalizing a project on the city’s west side at 730 Leonard St. NW, which is being transformed into 10 studio and eight one-bedroom apartments with three ground-floor retail spaces. The first tenants recently moved into the building, which is currently 50-percent leased, Coyne said.

As well, the project will be certified as a net-zero carbon development and will be part of the Grand Rapids 2030 District. Bazzani bought the adjacent property to construct another 10 apartment units based on the high demand for housing, Coyne said.

“We felt, as we were constructing 730 Leonard, that it was probably one of the worst, most challenging times as the supply chain got tighter and labor got tighter, but really because of our staff and subcontractors, we were successfully able to work through it,” Coyne said. “We could feel the demand was more than the 18 units, and they wanted to continue so we will be doing that probably in June or July.”

As with Bradford Station, Coyne is not actively planning to sell 730 Leonard.

“We’re not flippers or anything like that — we’re builders,” he said. “It’s just that things lined up pretty well for the Bradford Place project.”