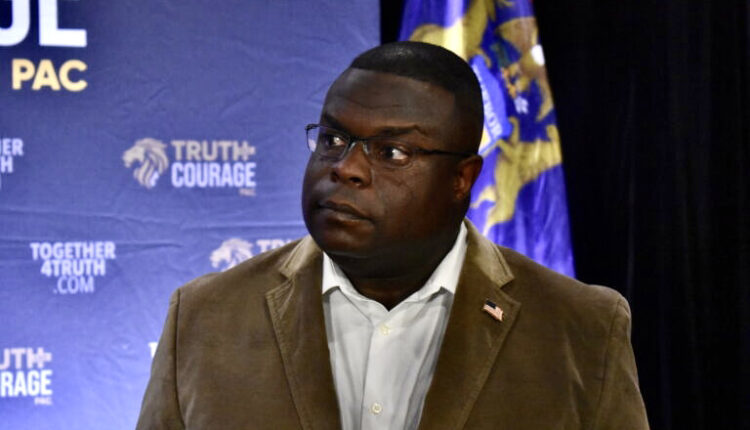 After failing to win a congressional seat long held by Republicans, John Gibbs has instead been hired as the new administrator for Ottawa County in Western Michigan.

The decision by the GOP-majority Ottawa County Board of Commissioners came during a more than five-hour meeting Tuesday that also saw the board fire the county’s top health officer and eliminate its Diversity, Equity and Inclusion Department. In the 2022 election, far-right Republicans running under the Ottawa Impact banner successfully ousted seven GOP incumbents on the West Michigan board they criticized for not being sufficiently right-wing.

Newly elected Commissioner Sylvia Rhodea, a Republican from Allendale Township, began the flurry of hastily added motions with a resolution to fire County Administrator John Shay and appoint Gibbs in his place.

“Our voters spoke very clearly about wanting a change in direction in our county and county leadership starts at the top with a county administrator,” stated Rhodea. “And so out of respect for our voters and the need to have leadership in our county which fully aligns with the Board of Commissioners, and who will cooperate and work fully and transparently with the Board of Commissioners, we believe it’s important to appoint John Gibbs. John comes to us way overqualified and also much loved by our county.”

The motion, which passed 6-3, was met with cheers and clapping from the audience. However, it was also met with incredulousness by several commissioners.

Commissioner Roger Bergman noted that Shay had been hired by a unanimous vote of the board following a rigorous vetting process.

“We chose John Shay unanimously because of his qualifications, because of what he had done and what he has done so far,” said Bergman. “And I’m appalled that you all would do what you’re doing today. I’m appalled.”

“I’ve been completely blindsided by this this morning,” said Curran. “While I think that John Gibbs is a fantastic candidate and is very overqualified, I felt that it was prudent to at least give county administrator Shay the benefit of the doubt to prove if he was going to be able to work with the board or not.”

Zylstra questioned why exactly Shay was being terminated, noting that nothing in the resolution addressed that.

“I have always appreciated John’s dedication to this county,” said Zylstra. “I don’t see any place in this resolution where it talks about any deficiencies in his actions as the administrator. I would like to understand why this is happening, especially at this very first meeting.”

Gibbs, who previously worked in the Department of Housing and Urban Development during the Trump administration, used an endorsement by Trump to beat out former U.S. Rep. Peter Meijer (R-Grand Rapids) in the August GOP primary, but then lost the 3rd Congressional District seat to Democrat Hillary Scholten in November.

Meijer was one of 10 Republican representatives who voted to impeach the former president for his role in inciting the Jan. 6, 2021, insurrection. Gibbs has also questioned the results of the 2020 election that Trump lost to President Joe Biden.

Gibbs’ congressional bid faltered largely on his hard-line anti-abortion stance and a tumultuous campaign that included revelations by CNN that he had formed an anti-feminism “think tank” in the 2000s that claimed men are smarter than women and concluded that “the United States has suffered as a result of women’s suffrage.”

Those statements ended up stalling Gibbs’ 2020 nomination by Trump to be director of the Office of Personnel Management, which was never voted out of committee.

Following his appointment as Ottawa County’s new administrator, Gibbs congratulated the board members for their decision.

“The Founding Fathers are looking down right now and are very proud of what’s happening right now,” he said. “Thank you to everyone for your prayers for the board and for Ottawa County. Those are being answered as we speak and will continue to be answered.”

Shay, who earned a base annual salary of $210,000, had a stipulation in his contract that provides him a year of severance pay and benefits in the event he is terminated without cause,

Ottawa County’s current vision statement of ‘Where you belong’ was used to establish the Diversity, Equity and Inclusion Department on the premise that county resident characteristics of being 90% white and largely conservative were problematic for businesses.

Rhodea also put forward a motion to change Ottawa County’s vision statement from “Where you belong” to “Where freedom rings.”

“Ottawa County’s current vision statement of ‘Where you belong’ was used to establish the Diversity, Equity and Inclusion Department on the premise that county resident characteristics of being 90% white and largely conservative were problematic for businesses,” stated Rhodea, who added that, “Where you belong” had been used to promote the “divisive Marxist ideology of the race equity movement.”

That resolution passed 7-1, and thus it was no surprise when Commissioner Lucy Ebel moved to close the county’s Diversity, Equity and Inclusion Department.

“As I knocked on doors, and I knocked on many doors, the voters spoke loudly,” said Ebel. “I heard stories of people applying for jobs and they told them they couldn’t get hired because they were white, and that is hiring based on color and that is not equality. I had a lot of tears, and they told me, ‘If you win, we want you to keep your promise,’ and I made a promise to the voters and now I’m honoring their votes and desires.”

Then followed a motion by Commissioner Allison Miedema to replace Administrative Health Officer Adeline Hambley with Nathaniel Kelley. That also passed 7-1, although Hambley will stay on board on an interim basis until Kelley’s hiring is confirmed by the state health department. Republicans campaigned heavily against a COVID-19 mask mandate in schools that hadn’t been in place for months.

The board also approved making Kallman Legal Group the county’s corporate counsel. Based in Lansing, the firm is best known for representing far-right clients, including Owosso barber Karl Manke when he ignored a stay-home order early in the pandemic and reopened his barbershop.