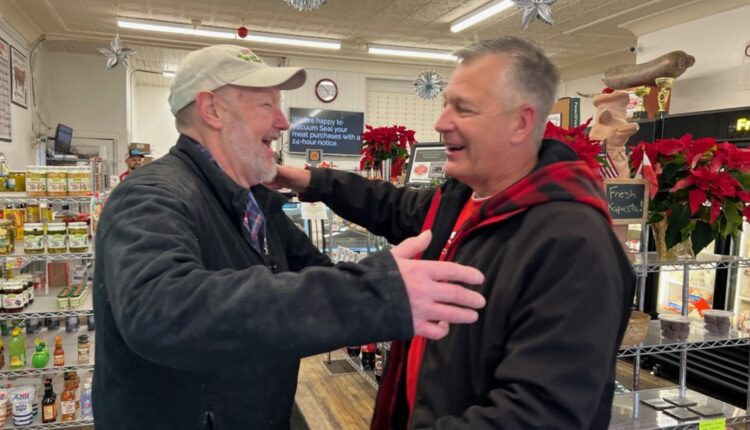 Fred Bivins had a heart attack at Lewandoski’s Market and owner Gary Szotko performed CPR to save his life. Now, Fred is paying it forward.

GRAND RAPIDS, Mich. — The entire country is reacting to the moment Buffalo Bills player Damar Hamlin went into cardiac arrest on the football field Monday night. Fred Bivins has seen the footage and he says he knows what it’s like to be the guy who needs help. Fourteen months ago, he was that guy.

In November 2021, Fred was at Lewandoski’s Market on the west side of Grand Rapids. He suffered a massive heart attack. Luckily for Fred, he was in the right place at the right time. Gary Szotko is the owner of the market and a retired Grand Rapids firefighter. He performed CPR on Fred and without his efforts, doctors say Fred wouldn’t be alive today.

Recovery from the incident took Fred months. But he vowed to pay it forward by raising money to help Lewandoski’s get an automated external defibrillator, or AED. When the community heard Fred’s story, the response was overwhelming.

“Money started coming in. Donations came in, and we ended up with enough for three AEDs. And it just was fabulous. We were thrilled with it. Overwhelming support,” Fred said.

With the money, Fred bought an AED not only for Lewandoski’s but also The Mitten Brewing Company and Eastern Avenue Hall, where Gary often plays in a band. With his own money, Fred also bought an AED for Vinecroft Studios, which is his art studio.

“To take it to other establishments, small businesses, where we know there are large amounts of people, customers that come in and provide that layer of protection, or at least, hopefully, some intervention prior to great first responders getting there, is a blessings,” Gary said.

Each AED costs about $2,000. They’re high tech and come with spoken instructions in English and Spanish. Anyone can follow along with the prompts, whether they’re trained or not.

Fred and Gary say business owners should strongly consider buying AEDs and if they can’t afford one, then making sure all staff members are CPR-trained is another great way to help prevent tragedies.

“It’s a continuation of the way I try to live my life, and that’s to benefit others as much as I can. And if that benefit includes them not dying, like I did, that’s great,” Fred said.