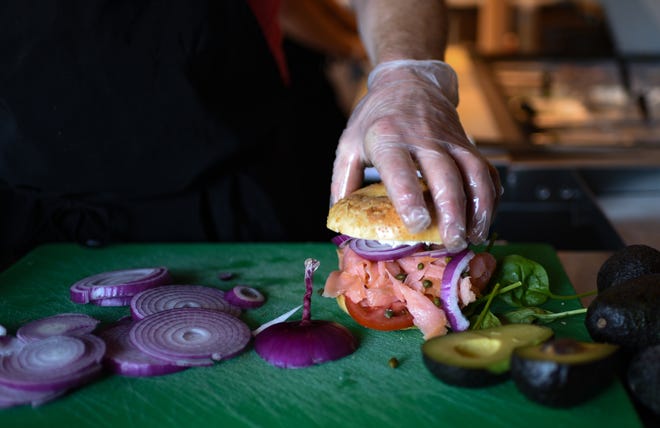 Deli owner Adrian Joseph plans to open the new East Lansing location this August in the former Poke Lab next to the Mad Eagle boutique and near many East Lansing staples.

GoodFellas Bagel Deli is a shop in Lansing’s Stadium District, serving breakfast sandwiches on the “finest bagels,” according to its website.

Joseph said the East Lansing location will have a similar menu to Lansing’s, but expanded, with more traditional deli sandwiches such as pastrami and corned beef.

Hours will be 7 am to 3 pm Monday through Friday and 9 am to 3 pm on Saturday and Sunday. But it will also be open 10 pm to 3 am Wednesday through Saturday.

That late shift is for that Michigan State University bar crowd, Joseph said.

The business is hiring for the new location, which will have 15 to 20 employees.

Joseph opened the Lansing location right before the COVID-19 pandemic hit. There’s been hurdles since then but now the restaurant is thriving, he said.

The Lansing location, about 675 square feet, has gotten busier than he expected. Joseph said he knew he needed a bigger footprint and he had a lot of college student customers, so when he was offered the downtown East Lansing space he jumped on it.

The East Lansing space, about 2,600 square feet, is under construction.

It will allow customers to sit inside and let staff try new things.

“Lots of space for lots of opportunity,” said Noah Jacobson, the general manager for the East Lansing storefront.

He’s going to try to bring some innovation and experimentation to the store, things competitors wouldn’t think of, Jacobson said.

He said he’s excited to have people sit inside the store, share a good meal and find out what the deli’s about.