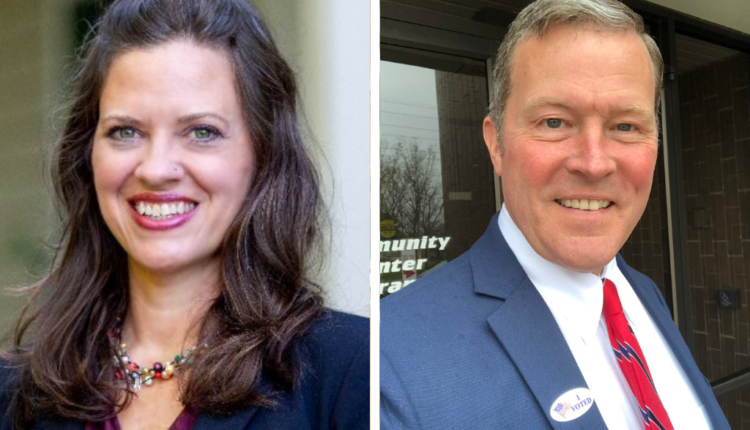 Regan lost the support of some of the Republican establishment after he said that he tells his daughters that “if rape is inevitable, lie back and enjoy it,” called the war in Ukraine a “fake war just like the fake pandemic,” and shared a meme saying that feminism is a “Jewish program to degrade and subjugate white men.”

“My opponent’s extreme, violent, and antisemitic views have no place in state government, and tonight the people of the 74th District made clear that they won’t stand for extremism,” Glanville said.

The district includes suburbs around Grand Rapids, including Grandville, Rockford and Walker.

Republicans have held the current 74th House District since it was drawn following the 2010 census. Former President Donald Trump won the area by nearly 16 points in 2020.

“This victory is the result of Carol Glanville’s hard work, an extremist Republican on the ballot, and Democratic enthusiasm in the wake of the potential fall of Roe,” said DLCC President Jessica Post. “Congratulations to Representative-elect Carol Glanville on this unprecedented victory. This election was a referendum on the extremism that is now the norm in the Republican Party and is clear evidence that voters are fired up about the right-wing assault on abortion rights.”

Regan and Glanville have both filed to run in the new 84th House District for a full term in November.

Tori Sachs, executive director of the DeVos-funded Michigan Freedom Fund, said that Republicans can win the seat back in November if they nominate a less controversial candidate in August.

“Candidates matter. Voters decide,” Sachs tweeted. “We couldn’t support Regan & it’s clear voters couldn’t either. The GOP can & will pick this seat back up in November if a credible candidate is nominated in August.”

Sachs was one of numerous Republicans who had condemned Regan’s comments in the run-up to the special election, calling them “despicable & disqualifying.”

“I’m the mom of four young girls. Every day I teach them to stand up for themselves, to know what they’re worth, and to fight back against creeps like Regan,” Sachs said at the time. “RJ Regan doesn’t belong anywhere near the state Capitol and that is why we endorsed and supported his opponent.”

In a news release on Tuesday, the House Republican Campaign Committee, the official GOP House campaign arm, noted that it “chose not to participate in the race.”

My opponent’s extreme, violent, and antisemitic views have no place in state government, and tonight the people of the 74th District made clear that they won’t stand for extremism

The House Republican Campaign Committee touted the two wins, noting they decided not to participate in the 74th House District race.

“Tonight’s results show just how ready Michigan is for a wave of new Republican leaders this fall,” HRCC Co-Chair Sarah Lightner said. “If this really is a preview of November, House Republicans have all the momentum and the wind at their backs, while House Democrats are left with nothing but a long list of questions to answer.”

Democrat Jeffrey Pepper lead Republican Ginger Shearer in the 15th House District, which covers most of Dearborn, as of Tuesday night.

The winner of that race will fill the seat vacated by Democratic former state Rep. Abdullah Hammoud, who was elected mayor of Dearborn.

Essay: The Whimper of the Detroit Lions