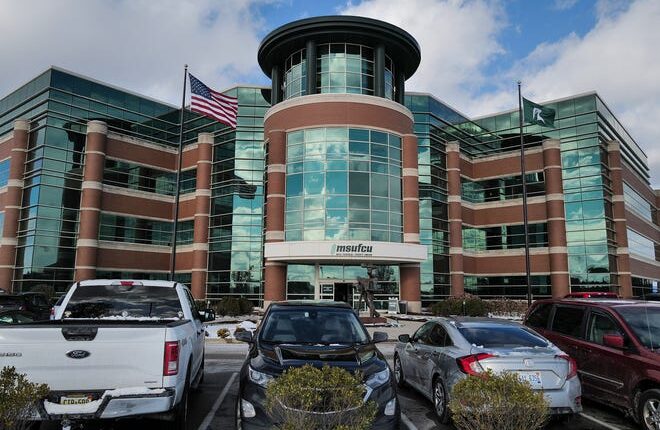 EAST LANSING — MSU Federal Credit Union might have had humble origins, first operating out of a college professor’s desk drawer, but in 85 years it has grown to more than 300,000 members and about $7 billion in assets.

Eight college faculty and staff members founded Michigan State College Employees Credit Union in 1937. They kept the institution’s ledgers and paperwork in a desk drawer in an office on the now-Michigan State University campus.

The founders set up shop after failing to obtain a loan from a traditional financial institution during the Great Depression, MSUFCU President and CEO April Clobes said at an 85th anniversary celebration Sunday.

“So that is core to the founding of this institution and the bulk of what we are here to do today,” she said. “Give people great loans with great service.”

That’s a far cry from the early days. The college faculty and staff members who created the credit union ran it themselves for 20 years before hiring their first manager, Frances Lesnieski, Clobes said.

Clobes, who has served in her role since Pat McPharlin’s retirement after 42 years in 2015, said it was very progressive of the board to have a female leader at the time and Lesnieski is the reason the company’s online chatbot is named Fran.

And the credit union continued to show a progressive streak. In the 1970s it was one of the first credit unions to install ATMs, issue credit cards and offer loans to women, Clobes said.

“I also hear stories from long-term women and African American members that we were the only financial institution in the ’60s and ’70s to approve them for loans,” she told the State Journal.

MSUFCU created its own website, desktop banking and mobile applications when digital platforms were first becoming popular, and now members log into the mobile apps more than 16 million times a year, she said.

She said MSU faculty, staff and students still account for the largest group of members at 30%. Family members of members are a close second at 28% and the remainder of the membership is Oakland University-affiliated, community members and business members. Oakland University employees became credit union members in 1966.

On Sunday, the company celebrated its 85th anniversary with food, fun and activities at its East Lansing headquarters campus. Clobes took the time to thank employees and members.

“Reaching 85 years is a significant milestone for any business,” she said. “It means to me that we are still relevant to our members. That we continue to offer new products and services that meet their needs.”

And the institution is continuing to grow. It’s constructing a branch on 28th Street in Grand Rapids and another in the Marquette Building in Detroit, which will open in early 2023. And it’s building a downtown East Lansing seven-story, 81,000-square-foot commercial building.

Clobes said the company is growing its commercial lending and small business programs, has new products planned for next year related to home loans, and continues to innovate with digital services to integrate human and digital service.

She thinks MSUFCU is important to members and the community because of the service it provides. Members appreciate the history of the company’s beginnings and that it was created to serve the MSU community.

She said during the celebration that people stopped her and said they’d been members for 50-plus years. One member stopped her with tears in her eyes, stating employees treat her like family every time she goes to the credit union and they’ve helped with her financial education and success.

“That is what the mission of the organization is, is to help each person have financial success and hopefully achieve their dreams because of the work that we’ve been able to do together,” Clobes said.

Here is a timeline of 10 important dates in MSU Federal Credit Union’s history, according to its website.