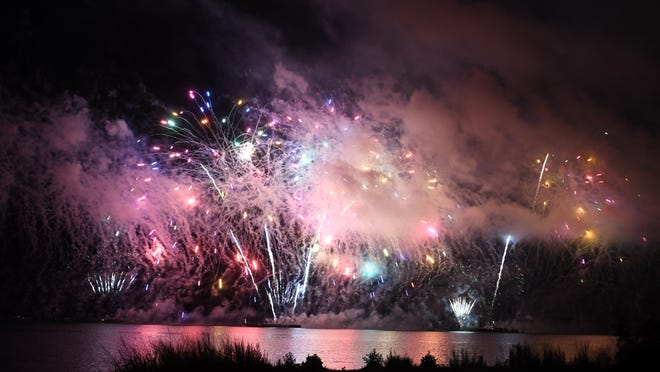 For the first time since 2019, people will be able to gather downtown to watch the iconic 2022 Ford Fireworks show illuminate the sky over the Detroit River.

Entering its 64th year, thousands of spectators are expected to gather Monday to admire fireworks that will be released from barges on the Detroit River. Tony Michaels, president and CEO of the Parade Company, said he’s excited the show is returning to its original location.

“It’s actually been three years because two years we did it on Lake St. Clair outside of Metro beach due to the pandemic,” Michaels said. “Here we are back on the Detroit River, and this is really going to be the biggest show that we’ve ever put on — more fireworks packed into 24 minutes than we’ve ever done before.”

A very large crowd is expected to attend this year’s show, he said.

More:Everything to know about the 2022 Ford Fireworks show in Detroit

“Hart Plaza opens at 2 and the Detroit Police Department then decides when the cut off should be as far as the crowd that goes into Hart Plaza,” Michaels said. “Then, people are lined up in the streets of downtown and the surrounding areas. There’s even people who set up chairs down Michigan Avenue and watch the fireworks… At 2 cars will be allowed to go over to Belle Isle. People can walk over all day and evening, but only cars can go at 2 and then the state will decide when they’re full. They can only take so many cars, and that fills up every year.”

This year, Ford Motor Company announced it will extend its partnership with the Parade Company through 2024 to continue providing beloved traditions such as the annual fireworks display.

For those who prefer to watch the fireworks in the comfort of home, WDIV-Channel 4 will broadcast it live beginning at 8 pm

In addition to the Ford Fireworks, here are some other displays to catch to celebrate the 4th of July.

Madison Heights Festival in the Park Fireworks: 10 pm June 26 at Civic Center Park, 360 W 13 Mile, Madison Heights. Admission is free to view the fireworks, and other festivities such as face painting, music, food, and games will begin at 7 pm

Clawson 4th of July Fireworks: 10 pm on July 4 at City Park, W Elmwood north to Park, N Washington west to N Bywood, Clawson. Freedom Festival will take place in the park prior to the show from 10am-9pm

Livonia Spree Fireworks Extravaganza: 10:15 pm June 26 at Ford Field, 33841 Lyndon, Livonia, 48154. The fireworks show will be a finale to the week long party celebrating the birthday of the city, featuring food, music and a carnival. All-day wristbands can be purchased for $25 during pre-sale.

Frankenmuth Fireworks Display: 9:30 pm July 3. The 30-minute show will be viewable throughout the city in downtown Frankenmuth.