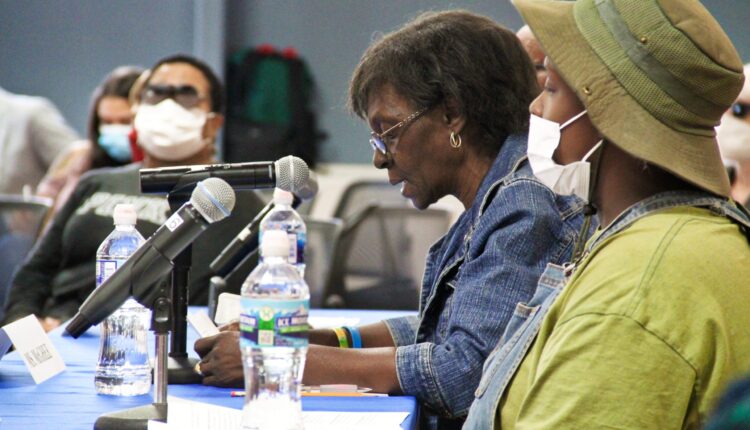 Daeya Redding said she wishes she could breathe fresh air when she steps outside her home near the U.S. Ecology South hazardous waste plant.

Redding, 22, said she’s all too familiar with the taste of rotten, sticky, metallic air that seems to coat her lungs. Redding links the asthma and sharp migraines she’s endured for most of her life  to pollution from the waste treatment facility, which has repeatedly violated state air quality standards. On Thursday, she told a congressional panel that Detroiters living in the shadow of industrial sites feel their health is being “sacrificed” for the benefit of corporations who evade accountability thanks to weak government regulations.

Testimony from Daeya Redding, a Detroit resident living near the U.S. Ecology South waste treatment plant, was presented to members of Congress during a Thursday, Aug. 25, 2022 hearing. (BridgeDetroit Photo by Malachi Barrett)

“For decades, Detroiters have fought against corporate polluters who have profited off using our neighborhoods as dumping grounds,” Redding said. “We want polluting facilities to stop all operations if they cannot fix their pollution issues, as we are paying for their pollution with our lives, our children’s lives, our bodies and our futures.”

Redding and her mother Pamela McGhee were among a group of Detroit residents, environmental experts and community advocates called to testify during a three-hour field hearing of U.S. House Subcommittee on Environment at the east campus of Wayne County Community College in Detroit. U.S. Rep. Rashida Tlaib, D-Detroit, led the hearing and said she relies on first-hand accounts from residents to drive policy changes in Congress.

Tlaib, who in August prevailed in the Democratic primary for the new 12th Congressional District, brought her colleagues to neighborhoods near the Stellantis Jefferson North Assembly Plant on the city’s east side ahead of Thursday’s hearing. U.S. Rep. Ro Khanna, D-Calif., said he could smell chemicals permeating the air where Stellantis builds Jeep and Dodge vehicles.

Representatives with U.S. Ecology and Stellantis could not be immediately reached Thursday.

Robert Shobe, 60, said living west of the Stellantis plant makes him feel like a “prisoner” in his own home. Shobe has lymphoma, a type of cancer, and chronic obstructive pulmonary disease, which can make breathing difficult. He described the constant smell of noxious paint fumes that leave him with headaches, nausea, a burning sensation in his eyes and tightness in his chest.

“This plant is making us sick,” Shobe said. “The psychological impact of not knowing what you are being exposed to, when you and your neighbors are getting sick, is really tough. It’s mentally draining.”

Ninety-four percent of residents living near the Stellantis plant are Black, according to city documents. Shobe joined east side residents in signing onto a civil rights complaint filed last November, which alleges the state discriminated against the majority-Black neighborhood by allowing Stellantis to expand its facilities.

The complaint, filed by the Great Lakes Environmental Law Center, alleges air pollution from the plant is causing health complications and displacing low-income residents. Claims are being investigated by the U.S. Environmental Protection Agency.

Shobe also raised concerns about the city’s Community Benefits Ordinance, which requires large developments to negotiate benefits with nearby residents and mitigate negative impacts. The agreement with Stellantis includes financial support for demolitions, home repair and neighborhood improvements. Shobe said repeated air quality violations issued by the Michigan Department of Environment, Great Lakes, and Energy show Stellantis is failing to uphold its end of the deal.

“We seem to be caught between the state’s failure in permitting, monitoring and sampling, and local officials’ failure to hold Stellantis accountable,” Shobe said. “While caught here, we are still breathing fumes, still getting sick.”

Robert Shobe, 60, said living west of the Stellantis Mack Assembly plant makes him feel like a “prisoner” in his own home. He testified at a Thursday, Aug. 25, 2022 hearing on the impact of corporate pollution. (BridgeDetroit Photo by Malachi Barrett)

Stellantis officials told BridgeDetroit earlier this summer that efforts were being made to secure state permits and install new odor mitigation equipment.

Michigan’s adult asthma rate ranks 8th highest in the country, according to the U.S. Centers for Disease Control and Prevention. While Wayne County ranks in the top 2% of American counties. Census tracts surrounding Stellantis facilities exhibit levels of adult asthma that are 130% to 176% higher than the state as a whole, according to the CDC.

Thursday’s hearing also was attended by state Rep. Shri Thanedar, D-Detroit, who will likely represent communities impacted by pollution at the federal level. Thanedar is the Democratic Party’s nominee to represent the new 13th House District, which includes most of Detroit and Downriver communities in Wayne County.

“Rashida (Tlaib) has taken leadership in this and has done a lot of good work, and I want to make sure that that is a seamless transition from that,” Thanedar said. “I think the polluters are looking at (violations) as just another cost of doing business. The penalties are not harsh enough. If it hurts their bottom line, then they would act on it as opposed to just assume that is just part of the cost.”

Thanedar said he wants to explore possible criminal charges that could be brought against repeated polluters, particularly when it can be proven that contamination has lowered a person’s life expectancy or caused health issues.

Representatives with the Great Lakes Environmental Law Center, Michigan Environmental Justice Coalition and Detroit People’s Platform also testified. They suggested policy changes such as strengthening Title IV to prevent discrimination against communities of color, lowering contamination thresholds to trigger enforcement actions sooner and requiring that decisions on permits consider the cumulative impacts of environmental risks that residents are living with.

Tlaib and Khanna also promoted legislation that would allow communities to hold polluters accountable in court for projects that use federal funds and engage in environmental discrimination. The Environmental Justice for All Act has not received a vote in the U.S. House as of today.

authored by
First published at https%3A%2F%2Fwww.bridgedetroit.com%2Fdetroiters-ask-congressional-panel-for-more-protections-from-pollution%2F