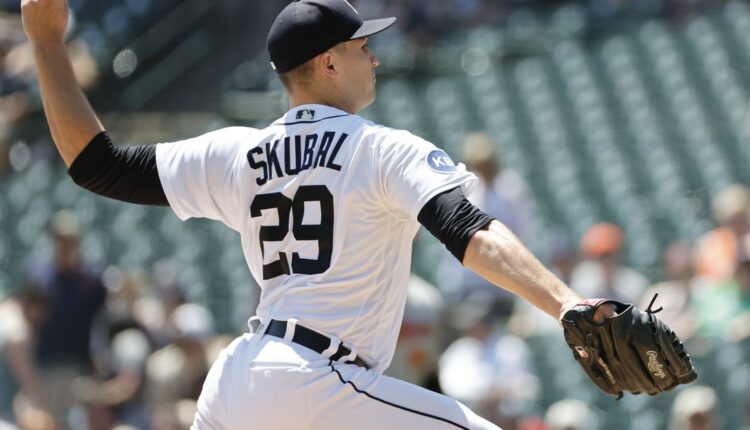 A week ago, the Detroit Tigers dropped two of three games to the Minnesota Twins in Minneapolis at Target Field. After taking game one, 7-5, and splitting a doubleheader yesterday, the Tigers have a chance to put away the Twins early in this five-game home series, and their best will be on the mound in left-hander Tarik Skubal.

After taking a ball off his left shin on May 20, many Detroit fans feared that Skubal would be the next Tigers pitcher to hit the injured list, but the 25-year-old lefty bounced back in his next start against Cleveland. He threw seven innings and surrendered three runs on five hits and a walk while striking out five Guardians. All the damage came in the third inning, and then Skubal changed his approach and flipped the switch, shutting them down through his final four innings of work. He left the game at a 3-3 tie, but the Tigers went on to win it in the bottom of the ninth on a walk-off single by Miguel Cabrera.

Skubal will need the offense to be better today and things have been hit-or-miss against the Twins in this series. Seven runs on Monday night is what we’ll call an outlier, and six runs across two games are what you’re more likely to get from the Tigers on any given day. Four runs were enough to get it done last night, but Jonathan Schoop carried things and it’s unreasonable to expect the division-leading Twins to put up a second-straight goose egg, even against a budding ace on the mound.

Skubal started the year off with a few rough outings in April but has dropped his ERA and picked up his strikeout numbers since. He’s relied on a steady dose of sliders and fastballs, according to Baseball Savant, but his four-seam usage is way down from last year. In 2021, Skubal threw the four-seam fastball at a 42.8% clip but that’s now down to 27.7% with much better results as a putaway pitch.

His changeup and sinker have also been called more often this season and are working in two-strike counts. Skubal has been very solid over his last five starts. He’s thrown a combined 31 innings and struck out 35 while giving up just five earned runs. It doesn’t take a genius to figure out that moving away from a healthy dose of fastballs has helped the young lefty become one of Detroit’s workhorses during this trying season. Hopefully, he doesn’t burn out in June while everyone else is on the mend.

Bailey Ober is making his third start back from the injured list. He left a game against the Tigers on April 29 with groin tightness in the fourth inning and missed over three weeks of recovering action. He’s only gone five and three innings since returning, so things are still rocky with him. Both of his last two starts came against Kansas City and things got ugly quick in the second matchup.

You can expect a healthy dose of fastballs (42.8%) up in the zone from Ober and the slider is his putaway pitch against rights (24.8%). Against lefties, Ober goes with the changeup (15.7%), and he hardly ever throws either breaking pitch to the opposite side. There is a curveball making its way into the pitch rotation but he only throws it 11.4% of the time despite decent results. Overall, Ober tends to be effective, but far from overpowering.

Skubal doesn’t have great experience against the Twins, but he’s kept Max Kepler (.231 against Skubal) and Jorge Polanco (.267) fairly quiet through 13 and 15 respective at-bats over his young career. Byron Buxton has done his fair share of damage against the lefty, homering twice off Skubal in six at-bats, but now is the time to see if the Seattle University product can make the correct adjustments to stay on top of a division rival.

Luis Arraez (.143) and Ryan Jeffers (.111) have also struggled against Skubal, but Kyle Garlick (.500) and Gio Urshela (.375) are some more names to watch out for. Of course, these are all really small samples and not really meaningful. As long as Skubal is on his A-game, it doesn’t matter too much who he’s facing.

Related to Skubal, but Kody Clemens will also be seeking his first major-league hit. He’ll be back in the starting lineup on Wednesday, playing left field this time according to AJ. Hinch. Clemens made his MLB debut with the Tigers on Tuesday in the second game of a split doubleheader. He struck out twice, walked and flew out to left in four plate appearances.