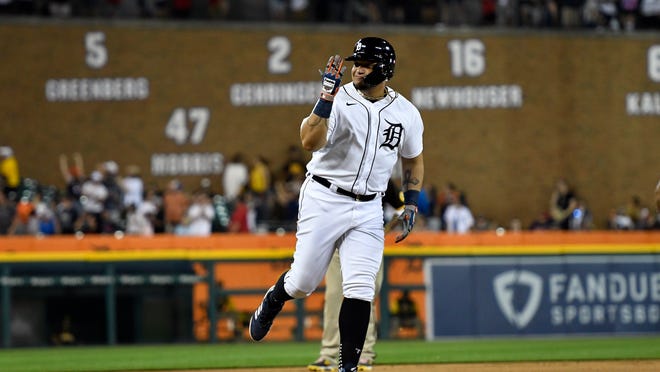 Detroit Tigers bring back Daniel Norris one year after trade

The Detroit Tigers signed left-hander Daniel Norris to a minor-league contract Tuesday, the team announced. The agreement became official 361 days after the organization traded him to the Milwaukee Brewers.

He will report to Triple-A Toledo.

THE CANDY MAN: Why Jeimer Candelario’s future with Tigers depends on his finish in 2022

The Tigers, stocking up on pitching depth ahead of the Aug. 2 trade deadline, also signed right-handers Chi Chi Gonzalez and Jacob Barnes to minor-league contracts. Gonzalez and Barnes have been assigned to the Mud Hens, too.

At last year’s trade deadline, the Tigers traded Norris to the Brewers in exchange for pitching prospect Reese Olson. For Double-A Erie, Olson has a 4.44 ERA with 25 walks and 116 strikeouts across 79 innings in 18 games (17 starts).

HOW IT HAPPENED: Daniel Norris reflects on career with Tigers after trade: ‘A lot of mixed emotions’

Norris, who became a first-time free agent after 2021, appeared in 27 games with the Chicago Cubs this season, posting a 6.90 ERA with 21 walks and 43 strikeouts across 30 innings. He had a 6.64 ERA with 15 walks and 18 strikeouts in 20⅓ innings with the Brewers last season, failing to earn a spot on the postseason roster, before reaching the open market in the offseason.

The nine-year veteran signed a major-league contract with the Cubs on March 19 but was designated for assignment July 17 and released July 22.

For the Tigers, Norris had a career 4.59 ERA in 139 games (77 starts). He joined the Tigers — alongside left-hander Matthew Boyd — from the Toronto Blue Jays in the David Price trade at the 2015 trade deadline.

Players on playoff bubble in better shape than we thought; anyone seen Eminem?