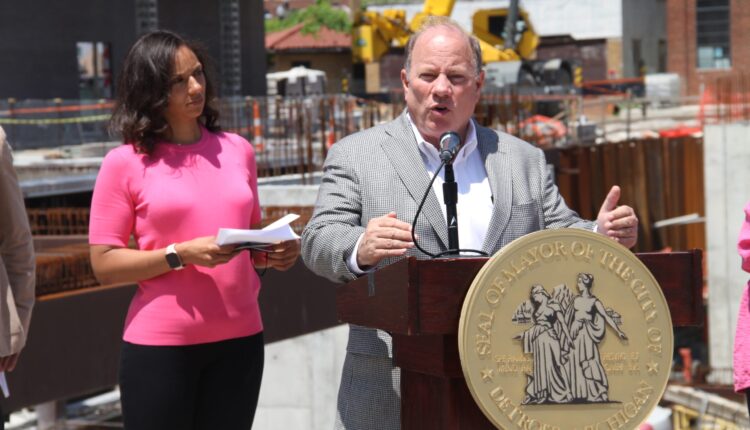 The Detroit City Council is calling on Mayor Mike Duggan to use federal pandemic aid funding to renovate and sell homes to Detroiters at below-market prices.

The request, laid out in a resolution unanimously approved Tuesday, was introduced by District 6 Council Member Gabriela Santiago-Romero. The action is nonbinding, meaning it does not carry the power to force Duggan into action, but it does serve as a public statement of priorities for the council.

The resolution also mirrors some of the proposals unveiled by Duggan last week as part of a seven-point, $203 million housing plan. One of those, Santiago-Romero said, is a $3 million program to rehabilitate homes owned by the Detroit Land Bank Authority and sell them to community development organizations.

“This resolution is a reflection of what happens when you work together,” Santiago-Romero said Tuesday. “My hope is that I can continue to work with the community, the administration and my colleagues for what our residents truly deserve.”

The council, in its resolution, commits to a “constructive and expeditious dialogue” with Duggan and to tapping the expertise of “highly motivated residents” to rapidly build out new housing programs.

The resolution asks Duggan to establish a mortgage fund managed by a city-based nonprofit, collaborate with homebuyer education agencies to identify other investments to support their work and to support home sales to Detroiters at below-market prices with federal American Rescue Plan Act dollars. It also calls for an additional $12 million in funding for the city’s Right to Counsel ordinance, which provides free legal aid to Detroiters facing eviction proceedings in court.

Council President Mary Sheffield thanked Santiago-Romero for leading the effort to reprogram ARPA funds for housing initiatives. Sheffield was also a member of the city’s previous council, which last year approved a spending plan for the federal funds despite her objections. Sheffield said she’d pushed for more ARPA investments in new housing at the time, but her proposal “fell on deaf ears.”

“In my opinion, these measures are precisely what the authors of the American Rescue Plan Act had in mind when they allocated this funding,” Sheffield said Tuesday.

Several Detroiters who addressed the council Tuesday expressed support for the resolution and the inclusion of $12 million for Right to Counsel.

“This proposal promises the chance of homeownership for more Detroiters and has the opportunity to put more Detroiters back to work – both sorely needed in the city,” said Francis Grunow, an urban policy consultant and historic preservationist. “Especially after so many Detroit homeowners of color lost homes due to overassessments and misguided policy over the years.”

Detroit received $826.7 million in ARPA funds, the fifth-largest pot of federal cash sent to cities across the country. Just under half of the funding was used to offset budget shortfalls caused by pandemic cuts. The remaining $426 million was designated for various categories of community investments.

The largest allocations under Duggan’s plan included $250 million for city services and infrastructure; $105 million for employment and jobs programs; $95 million for blight remediation; and $50 million for public safety initiatives.

The new council took office in January and members said they have since heard concerns from residents that more money should be used to stabilize housing. Santiago-Romero said she drafted the resolution after dozens of Detroiters this summer pushed for more investment in affordable housing programs.

Santiago-Romero’s resolution states that community development organizations should renovate homes included in Proposal N, Detroit’s $250 million bond plan to renovate and demolish thousands of blighted homes. Duggan championed the bond initiative, which was passed by voters in 2020, as an important tool to stabilize Detroit’s housing stock.

The Detroit Housing and Revitalization Department has identified at least 1,491 properties for “stabilization” using Proposal N funds, according to the resolution. The document suggests the land bank could sell the homes to community development organizations for $1, allowing the groups to get renovated houses into the hands of residents. The resolution states construction activities could be coordinated with Detroit at Work, the city’s job placement and training agency.

After the supply of Prop N homes is exhausted, the resolution urges Duggan to identify other homes owned by the city or land bank to renovate and transfer to community development organizations.

Duggan massive housing plan, supported with federal pandemic aid, includes selling 20-50 land bank-owned properties to community development organizations who would rehabilitate the properties and rent them for at least a decade to people earning at 50% to 60% of the area median income. In Wayne County, that translates to a three-person family earning between $40,300 and $48,360.

Other initiatives include $132 million to fund 1,600 new housing units; $60 million for a new Detroit Housing Services division to help residents access housing counseling and foreclosure prevention assistance; $13 million for down payment assistance for 600 Detroiters; and $5 million to bring more than 1,000 city rental units up to code.

Housing is considered affordable by the U.S. Department of Housing and Urban Development (HUD) when families spend less than 30% of their income on rent and utilities.

Santiago-Romero’s resolution focuses on meeting the demand for housing among median-income Detroiters. It notes that market-rate homes are unaffordable for the average resident earning a median wage, estimated to be just under $32,500 by the U.S. Census Bureau.

The resolution, she said, is meant to complement the $203 million housing plan. Less than half of Detroit residents own a home, and large investments in home ownership could create $300 million in savings for Detroiters who are paying rent over the term of a 30-year mortgage, according to the resolution.

Julie Schneider, acting director of the city’s Housing and Revitalization Department, said Tuesday that the resolution “overlaps” with initiatives announced by the mayor last week.

“I believe the plan we presented to be comprehensive in nature and dealing with the many housing instability issues that Detroiters face each and every day,” Schneider said.

At-Large Council Member Mary Waters said last week’s announcement is “just the beginning.” She hopes to continue discussions with Duggan to address the overassessment of Detroiters who were estimated to have been overcharged $600 million in property taxes from 2010-16.

“There’s been an outcry as it relates to over assessments,” Waters said.

authored by
First published at https%3A%2F%2Fwww.bridgedetroit.com%2Fcouncil-asks-duggan-to-fix-sell-homes-to-middle-income-detroiters%2F

Detroit Tigers bring back Daniel Norris one year after trade