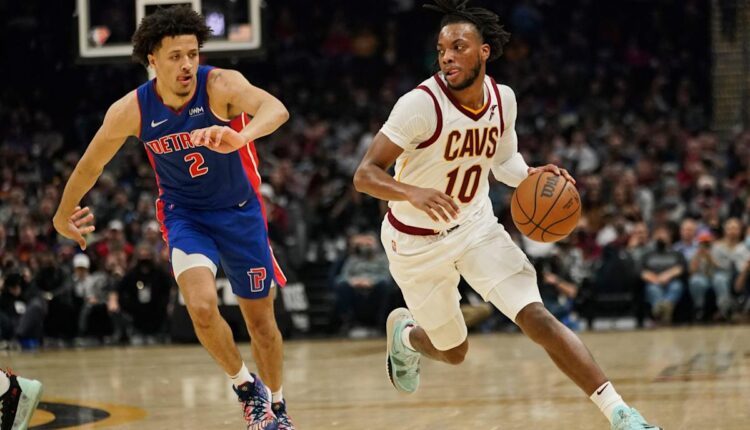 Game notes: The Pistons meet one of the surprise teams of the 2021-22 NBA season in their first game after the All-Star break. Cade Cunningham, Isaiah Stewart and Saddiq Bey didn’t get as much break as others, playing in the revamped Rising Stars challenge (Cunningham was the MVP of the event) and Saturday night’s Skills Challenge (Cunningham’s team finished second). Detroit came into the break fresh off a surprising upset — ending an eight-game skid — of the Boston Celtics, who came into that matchup winners of nine straight.

[ Pistons to bring back jerseys that have cult following ]

The Cavs, thought to be rebuilding at the season’s tip, are just 2½ games behind first place in the Eastern Conference. The team recently acquired former Michigan basketball star Caris LeVert to bolster its offense and offset the losses of injured guards Collin Sexton and Ricky Rubio. LeVert — out 1-2 weeks with a foot sprain — joins an elite defense (102.5 points allowed per game, lowest in the league) as well as productive offensive players like All-Stars Darius Garland (20.3 points and 8 assists per game) and Jarrett Allen (16.2 points and 11 rebounds per game) as well as standout rookie Evan Mobley (14.9 points and 8.1 rebounds per game).

The Central Division foes have split the first two meetings this season and play for the final time March 19.

[ The Free Press has started a new digital subscription model. Here’s how you can gain access to our most exclusive content. ]

More Solar Panels at M-72, Wind Turbine to Come Down

KHN’s ‘What the Health?’: Contemplating a Post-‘Roe’ World