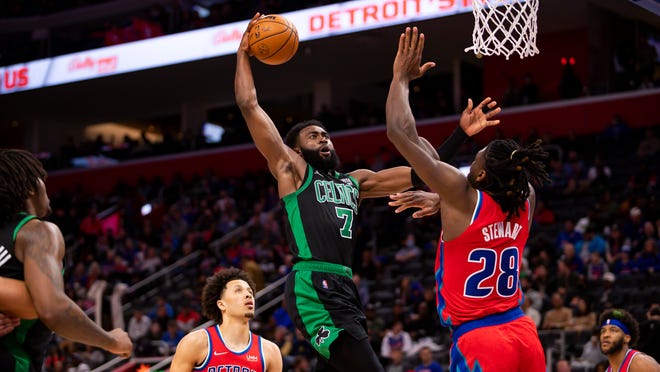 Momentum appeared to be on the Detroit Pistons’ side Saturday afternoon.

After a strong third quarterer allowed them to build a four-point lead over the Boston Celtics, Cade Cunningham made a midrange shot and Killian Hayes stole the ball from Jaylen Brown and finished a transition dunk to keep the Pistons in control.

But the Celtics took over in the final eight minutes to pull off a 113-104 win at Little Caesars Arena.

Cunningham led the Pistons (14-46) with 25 points, seven rebounds and three assists on 11-for-19 shooting, but picked up two fouls early in the first quarter and his fifth foul midway through the fourth quarter.

On a per-minute basis, Cunningham was Detroit’s most-effective scorer during the first half. He scored seven of his first 12 points in the first quarter, knocking down a side-step 3 and two buckets inside of the arc.

But foul trouble limited him to just nine first-half minutes. He picked up two fouls in the first three minutes and 33 seconds of the game, and coach Dwane Casey allowed him to play a few more minutes before subbing him out for Hamidou Diallo with 5:10 left in the first quarter. He checked back in midway through the second quarter, but picked up his third foul with 3:55 to play until halftime and subbed back out.

Early foul trouble has been a recurring issue for Cunningham this month, as he has picked up two first-quarter fouls in four of his past six games — against the Celtics Feb. 16, the Washington Wizards on Feb. 14 and New Orleans Pelicans on Feb 1. The coaching staff has tried to find the right balance between letting Cunningham play through it and benching him to save him for the end of games.

Foul trouble marred what was otherwise a great offensive performance for Cunningham. After scoring nine points in nine minutes during the first half, he maintained his rhythm by scoring 16 points in the second half. He scored eight points in 11 minutes in the third quarter, but was subbed out of the fourth quarter after playing just over a minute following his fifth foul with 7:30 remaining.

A 15-3 run gave the Celtics a 100-90 lead with 5:17 to play, and forced the coaching staff to put Cunningham back in. He continued to dictate the flow of the game, scoring six straight Pistons points and assisting a Joseph 3-pointer to cut the margin to 105-99, with 2:46 on the clock. But late turnovers by Cunningham and Isaiah Stewart helped Boston clinch the win.

Dick Versace, who served as top assistant to Pistons coach Chuck Daly from 1986-88, died Friday at 81 years old. He left the Pistons and coached parts of three seasons with the Pacers, going 73-87 in 1988-90. He later was a front office executive with the Grizzlies from 1999-2005.