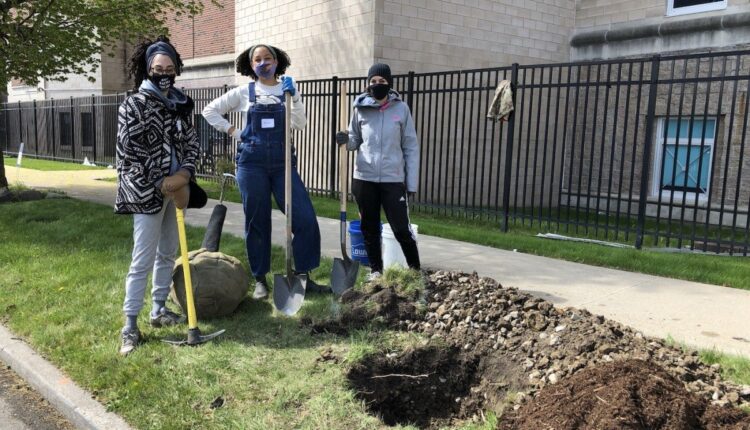 Amid climate change and deforestation, Greening of Detroit has turned to a very simple solution: planting trees. Here’s how the nonprofit has planted more than 100,000 trees through workforce development.

Large cities like Detroit are not usually top-of-mind when people discuss forestation programs, but trees play a crucial role in cities. They help absorb air pollutants, keep cities cool and prevent flooding — all issues increasingly important due to climate change. And with urban areas losing an average of 36 million trees every year, reforestation is just as essential for cities as it is for rural regions.

“You know, we see counterparts in some suburbs with 30-40% more tree canopy. So how do we fix that to reap the benefits?” Bradford said. “You can find a difference of at least three to five degrees between the city and the suburbs, and that’s a very real thing.”

Bradford says this is crucial for neighborhoods that experience stagnant water backup after storms, which can lead to mosquito infestations and sanitation-related illnesses.

However, Branford says the scope of the organization encompasses far more than planting trees. In addition to employing community members and working with volunteers, Greening of Detroit runs two workforce development programs that are the backbone of their operations.

The first, called Detroit Conservation Corps, has trained over 1,000 adults with employment challenges through a six-week program. They’ve employed 86% of the trainees, and helped the others find job placements elsewhere.

The second program, Green Corps, is an eight-week summer employment program for youth. When it was founded 23 years ago, it was focused on teaching youth to maintain city trees. Today, however, it also includes camping and other environmental programming.

“About 95% go on to college and major in environmental studies. We’re very selective about youth that come through,” Bradford says. “It’s our chance to cultivate the next generation of environmental stewards.”

This summer, 50 Detroit-area youth will participate in Green Corps. In the past, as many as 200 have been involved. Bradford says the number scales in part due to funding. ​

One of the branches of Greening of Detroit that the youth work with is the Walter Myers nursery, which Greening of Detroit took over management of from the city about 15 years ago. Since 2017, they have planted more than 4,000 trees in the nursery. This year was the first time that some of those trees were mature enough to be transplanted into the community. Greening of Detroit partners with the city to determine the best varieties of trees and locations for planting in neighborhoods and parks.

“Though many Detroit parks were decommissioned in the 2010s, some are coming back though with the help of Greening of Detroit,” Bradford says.

The nursery also factors into their Tree Equity Initiative, through which they aim to plant 75,000 trees in five years. Some of those trees will come from the nursery, while others will be purchased. “We want Detroit to have a tree canopy of 40%,” Bradford says. “And we’re working on our social enterprise model for work related to our mission.”

While Greening of Detroit has been working to increase funding streams from their own services, such as selling plants from its nursery, most of its funding comes from grants and donations from the government, foundations, corporations and individuals.

Bradford says it was their first time working with a CDFI, but they couldn’t be more grateful for the connection.

“We’ve since been forgiven for both loans and they could not have come at a better time,” Bradford says. “Funding was very scarce for nonprofits. Organizations such as ours weren’t top of the list [for most banks]understandably.”

According to CRF-USA’s Executive Vice President and Chief Impact Officer Keith Rachey, they’re just the type of organization his CDFI looks for.

“The Greening of Detroit’s mission, community focus, and social impact are perfectly aligned with CRF’s vision of creating a just economy that works for all,” Rachey says.

This story is part of our series, CDFI Futures, which explores the community development finance industry through the lenses of equity, public policy and inclusive community development. The series is generously supported by Partners for the Common Good. Sign up for PCG’s CapNexus newsletter at capnexus.org.

Hadassah Patterson has written for news outlets for more than a decade, contributing for seven years to local online news and with 15 years of experience in commercial copywriting. She currently covers politics, business, social justice, culture, food and wellness.