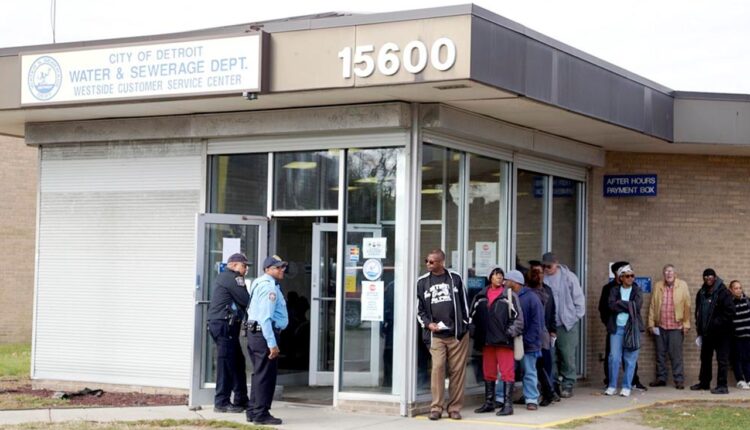 The planned resumption of water shutdowns in Detroit, one of the poorest big cities in America, will have immense implications for the quality of life for thousands of workers and their families in the coming months.

Residents wait in line in front of a water payment center in Detroit [Photo: WSWS]

The average debt per customer is a staggering $700. The average monthly bill for a family of three in Detroit is $81.62, coming to just under $980 annually.

Detroit is notorious for its brutal practice of water shutdowns. In 2013, while Detroit was under emergency management and bankruptcy proceedings, DWSD shut off water for 16,693 households. In 2014 that number nearly doubled. The practice made international news, including condemnation from the United Nations.

The brutal policy of aggressive water shutoffs were originally enacted at the behest of Kevyn Orr, then Detroit Emergency Manager, with the collaboration of trade union leaders, who agreed to sacrifice city workers’ livelihoods and retirees’ pensions as part of the bankruptcy deal. A key part of the bankruptcy settlement was plans to sell off or privatize city assets, including the lucrative DWSD.

Or engaged in behind-the-scenes political machinations with financial and political elites to establish the Great Lakes Water Authority (GLWA). With approval from the state, hundreds of Water Department workers, the bulk of the workforce, were fired, and the DWSD was subsumed into the new political entity to facilitate privatization of water in Southeast Michigan.

Between 2015 and 2019, under the leadership of Democratic Mayor Mike Duggan, DWSD carried out over 93,000 shutoffs. On March 9, 2020, the city was forced to stop the practice when a moratorium was placed on shutoffs in response to the onset of the COVID-19 pandemic.

The city’s collection rate dropped from 93 percent at the start of the pandemic to 75 percent in April during the ongoing shutoff moratorium.

The false basis upon which the water shutoff moratorium is being lifted is that the COVID-19 pandemic is over. In Michigan, deaths from COVID-19 are even more prevalent than they are nationwide. Across the state, at least 36,982 people have died from the virus, equal to about 370 deaths for every 100,000 people. Michigan has the 10th highest death rate per capita in the country.

In fact, right now the BA.5 Omicron subvariant is again driving up cases, hospitalizations and deaths throughout the state and across the country.

Shutting off water for low-income residents will undoubtedly lead to an even higher rate of all kinds of disease due to the unsanitary conditions it will create. The washing of hands, one of the most basic tools for keeping any germs from spreading, will be denied to families who need it most.

COVID-19 has had a devastating impact on working conditions throughout the country, in Michigan in particular. Thousands of workers are unemployed or underemployed throughout the state, and with record levels of inflation, workers everywhere are struggling to make ends meet.

On top of all of this, water in the Detroit area is much more expensive compared to other areas in the state, despite the proximity to the world’s largest fresh water supply in Lakes Huron and Erie. According to a report issued jointly by the University of Michigan and Michigan State, one in ten Detroit households spends more than a quarter of its income—outside of other essential expenses like food and utilities—on water services.

The report found that since 1980, the average cost of water service—drinking water, sewage, and storm water costs—in Michigan increased 188 percent when adjusted for inflation, compared to increases of 285 percent in Detroit and 320 percent in Flint.

Water bills in Detroit rose an average of 2.9 percent each year over the last five years, according to DWSD. Annual rate hikes were even higher before 2016, often reaching double-digit increases.

In late June, DWSD introduced a “Lifeline Plan,” ostensibly to help residents manage their insanely high water bills. The plan was approved by the Board of Water Commissioners. City officials have claimed they will prevent service denials in 2023 for low-income customers who enroll in payment assistance programs, but have also admitted that funding to support the programs is not guaranteed to continue.

Moreover, advocacy groups have reported many obstacles to the program. Many have indicated that communities with a higher proportion of immigrants are less likely to answer the door due to fears that it may be a trick from federal immigration and customs enforcement officers.

Canvassers also run into language barriers. Many Detroit neighborhoods are home to native speakers of Arabic, Bengali and Spanish.

There is no doubt that the “Lifeline Plan” will be largely ineffective at stemming the real crisis at hand.

The fact that so many families are at risk of losing water in the heart of world capitalism and the center of the auto industry is an indictment of capitalism, a system that guarantees billions of dollars to banks and big corporations while depriving workers and young people of the most basic necessities of civilized life.

The provision of water, electricity and other utilities and the guarantee of decent-paying and secure jobs, health care, housing and education are social rights over which there can be no compromise. Water must be freely available to everyone. All shutoffs must be stopped immediately, and those whose water has been turned off must have access to this basic necessity restored immediately.