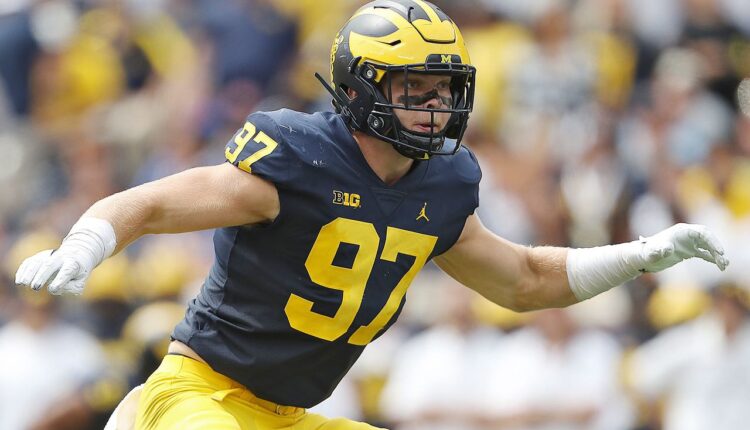 ESPN draft analyst Todd McShay is sticking to his guns regarding the Detroit Lions. The order has changed since his last mock draft was published, but the picks have not.

McShay has Detroit taking Michigan edge defender Aidan Hutchinson at Pick 2, then North Carolina quarterback Sam Howell at Pick 32. He had Hutchinson at Pick 1 in his first go-round, with Howell at Pick 25. Hutchinson’s name hasn’t left the top of mock drafts, and it doesn’t look like that’s changing between now and April. It’s worth noting the draft analyst sent Alabama offensive tackle Evan Neal to Jacksonville at Pick 1. That left the Lions to pick between the top edge defenders on the board in Hutchinson and Oregon’s Kayvon Thibodeaux.

“This is a slam-dunk scenario for the Lions,” McShay writes. “They gave up 5.9 yards per play (29th) and 26.9 points per game (28th), opposing quarterbacks had the third-best QBR against them (53.4), and only two teams had fewer sacks than their 30 on the season. Hutchinson — who is from Michigan and played his college ball under an hour from Detroit — is a relentless pass-rusher who had 14.0 sacks and 66 pressures last year. He can take over a game on defense, and Detroit needs more players like that, especially because its top pass-rusher in 2021 (Charles Harris, 7.5 sacks) is a free agent.”

What else is there to say about Hutchinson? He finished second in the Heisman voting. He led Michigan’s thrashing of Ohio State while generating a ridiculous 15 pressures. The ringer recently compared him to a “souped-up Maxx Crosby” and Marcus Davenport. Hutchinson’s motor, power and size are what you want in a highly-drafted defender.

It’s also worth remembering that Detroit’s edge defender faces questions in the form of not only the free agency of Charles Harris. But what happens with Trey Flowers. The veteran and team-voted captain carries a cap hit of $23.2 million for the 2022 season and $23.6 million for 2023. The Lions would save $10.4 million in space by cutting the veteran. Flowers is an impressive all-around talent that would be one of this team’s best players. It’s just been hard to get him on the field, and it’s harder to justify that price tag for only 19 pressures and 3.5 sacks in two seasons.

McShay is also one of the leaders of the Howell to Detroit charge. This is the second time he’s sent the North Carolina quarterback to the Lions on Day 1, and he’s not alone. McShay makes all the good points from the outside via the national perspective, in this being Detroit’s opportunity to draft its quarterback of the future without rushing Jared Goff out the door.

The Lions and their staff spent the week coaching Howell at the Senior Bowl. It’ll be interesting to see if they fell in love with him or any of the other gunslingers while down in Mobile.

“Now it can take advantage of the final pick with a fifth-year option attached to it and draft a quarterback — not unlike what the Ravens did with Lamar Jackson in 2018,” McShay writes. “Tough and competitive, Howell fits well with the Lions’ organization. He is super accurate hitting the deep rail shots, and he has a quick delivery and good touch. But his footwork needs work, and he will need to improve the anticipatory intermediate-level throws. Let Howell sit behind Jared Goff, whose dead money falls from $30.5 million in 2022 to $10 million in 2023 and $5 million in 2024. I’d like to see Howell link up with receiver Amon-Ra St. Brown to jump-start the Lions ‘ passing attack, which had the league’s 25th-best total QBR in 2021 (37.6).”

Howell was considered among the top prospects for 2022 around this time last year. But a down season and some early sloppy showings have him teetering between Days 1 and 2. It’s worth noting that Howell’s down season wasn’t really all that bad, especially when considering the circumstances.

He took more control of the offense after North Carolina lost a bunch of talent to the NFL (Javonte Williams, Michael Carter, Dazz Newsome). Howell ran for 828 yards and 11 touchdowns last season. This was quite the improvement after entering the season with only 181 rushing yards in 25 games. Howell threw for 3,056 yards with 24 touchdowns and nine interceptions. His completion percentage dropped from 68.1% to 62.5%. The biggest knocks against his game appear to be with some of his decision-making and footwork inside the pocket.

The Lions haven’t built around a mobile QB in nearly a half-century. Could they do it again?