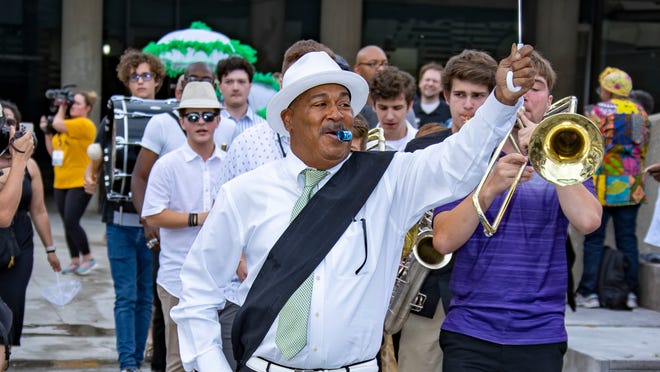 Detroit — Jazz fans from all across the country converged Friday night at Hart Plaza on the city’s riverfront for the first in-person Detroit Jazz Festival since 2019.

The cement steps in front of the stage were already packed before the first act — Dr. Valade’s Brass Band featuring Shannon Powell — even stepped on stage. By the end of their show, the crowd was on their feet, dancing and singing along.

Rosalind McClure-Jackson, of Detroit, danced her way to her seat, her two young grandsons behind her. She brought them to the festival to “get some culture,” she said.

McClure-Jackson said she wants her grandsons to learn to love and enjoy life, something music helps her to do.

She loves the music because it “soothes the soul and calms it.”

The free festival runs Friday through Monday with music on four stages downtown. Three stages are at Hart Plaza and one is at Campus Martius. The festival also will be streamed live because of how many people tuned in for streaming video of the performances during the pandemic.

Detroit’s jazz festival draws people from all over the country, like Byron Barr, who came from California for the gathering.

The Altadena, Calif. resident is a self-described jazz fanatic and has traveled all across the country for festivals — but Detroit’s is his favorite. This weekend is his third Detroit Jazz Festival.

“This whole city is an attraction for me,” Barr said. “It’s a mecca for jazz here. You’re really out front here in Detroit.”

Mike Loomus has been coming to the Detroit jazz festival for about a dozen years since he was about 18 years old. He loves jazz and being in downtown Detroit. He brought his partner, Liz Mohler, and 8-year-old Emma Yanty. They drove up from Toledo and plan to come back each day.

“He’s such a diehard,” Mohler said of her husband.

Emma doesn’t love jazz as much — it depends on who is playing, Loomus said. Mohler said Emma tends to prefer pop music.

“I’m not a big fan of jazz but I’ll listen here and there,” Emma said.

Edmund Hawkins, of Chicago, came to visit his aunt, Trudy Hawkins, who lives in West Bloomfield. He’s a huge jazz fan, Trudy not as much. The two are more like siblings than aunt and nephew, as they are only a few months apart in age.

This is Edmund Hawkins’ fourth time at the Detroit jazz festival and he watched the livestreamed festival in 2020 and 2021 during the pandemic.

Chicago has its own jazz festival during Labor Day weekend, but Edmund Hawkins said it doesn’t compare to Detroit’s show.

Lt. gov. Garlin Gilchrist II, a Detroiter, spoke after the first act. He said everyone around the world has their eyes on Detroit this weekend for the festival.

“We know that jazz is Detroit,” he said.