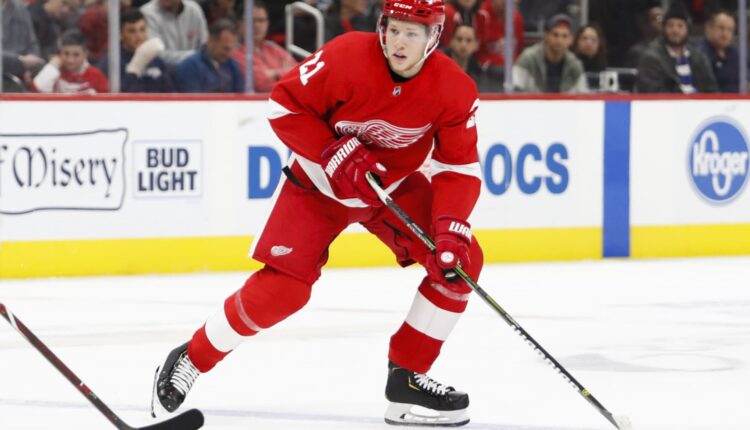 The Detroit Red Wings hoped that defender Dennis Cholowski could settle in well as the organization’s defender. The stars haven’t fully adjusted to him at the NHL level, but he did well at Grand Rapids in early 2020/21.

Cholowski is stationed with the Grand Rapids Griffins and has played for seven games. Max Bultman, the Detroit Red Wings beatwriter for The Athletic, tweeted that the organization hoped Cholowski could play an “elite” game.

He didn’t have the ideal start to his career that the Red Wings were hoping for, but there’s a good chance that things could change when things finally clicked for him. If Cholowski can prove he’s worth moving up to the NHL at Grand Rapids, the Red Wings could be in for a surprise.

The Detroit Red Wings hope that the success that Dennis Cholowski achieved at Grand Rapids can be translated.

In 2019-20, Cholowski played in 36 games in the NHL, where he scored two goals and added six assists for eight total points.

The real tragedy of Cholowski’s game was the minus-26 of the season for the Red Wings.

While yes the team was terribly bad in 2019-20, Cholowski looked like a pylon in the defensive zone and had to show some changes before getting another chance. His first two rounds with the Red Wings weren’t ideal at all.

Maybe that sounds like a broken record, but Cholowski showing off his skills with the Griffins means he could try to carry this over to the NHL level.

Cholowski has played with the Griffins in seven games, adding three goals and five assists for eight total points.

He is tied for the second highest score on the Griffins early in the 2020-21 season. Cholowski has got off to a good start with the Griffins and if he gets promoted he’ll try to iron things out with the Red Wings.

With Cholowski playing at the AHL level for the entire 2020-21 season, there is hope that he can develop his defensive side for the next time he hits the NHL level.

The Red Wings should hope that Cholowski can finally become the defenders he had hoped for when drafted by the Red Wings.