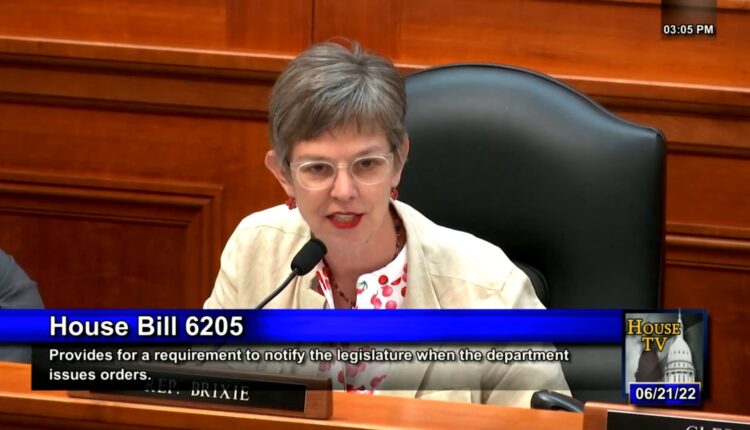 While a House panel voted nearly three dozen GOP bills out of committee Tuesday — with many aimed at reducing the state’s emergency powers or repealing “outdated” or “bad” laws — Democratic members tried to put their own footprint on the package by proposing the bills be tied to measures that would enshrine rights to abortion and contraceptive access, end Right to Work legislation and more.

All such amendments failed. With GOP amendments tacked onto several of the bills, all 31 were passed out of committee Tuesday over mostly party-line votes.

The House Oversight Committee first took up the 31-bill package on Wednesday, June 15. While Democrats on the panel denounced some bills for unnecessarily restricting executive and state power, Republicans maintained that most do away with outdated, redundant laws.

But the package’s cornerstone legislation, House Bill 6184, is another of many attempts from the GOP-led Legislature to curtail emergency orders from the Democratic governor or Michigan Department of Health and Human Services (DHHS). It would put a time limit of 28 days on any such order, after which the Legislature would have to approve another extension. The DHHS director would also need to provide information on why the order is necessary.

Gov. Gretchen Whitmer has repeatedly vetoed similar efforts from lawmakers over the last two years as Republicans have fought to strip Whitmer of her emergency powers during COVID-19.

Another bloc of the package’s bills, House Bills 6185-6192, would repeal what Republican supporters characterize as “outdated, duplicative or unnecessary” grants of power to the state.

After GOP amendments on some of the bills passed, state Rep. Julie Brixie (D-Meridian Twp.) attempted to tack on some amendments of her own.

“I appreciate the concept that we’re going through and looking at outdated legislation,” Brixie said, before proposing an amendment which would tie-bar House Bill 6187 to Democratic legislation to protect abortion rights in Michigan.

A tie bar between bills makes it so one cannot pass without the other also being passed.

If the U.S. Supreme Court does overturn the 1973 landmark Roe v. Wade decision, which it is poised to do as soon as this week, Michigan has a 1931 felony abortion ban on the books. However, that ban is currently unenforceable after Court of Claims Judge Elizabeth Gleicher granted a preliminary injunction in a suit brought by Planned Parenthood against the ban. Democrats have been trying without success to repeal the 1931 law for years.

For House Bill 6191, which deals with abandoned mines, Brixie proposed tie-barring the bill to a House resolution to support contraceptive access for all Michiganders.

“We weren’t consulted in the [legislation] cleanup idea. And so this is our procedural way to give our input regarding what we feel needs to be cleaned up in the law,” Brixie said. “The idea that contraception access is something that only is available to people who are married is absolutely outdated and needs to be eliminated.”

That amendment failed, as did a similar amendment to House Bill 6192 that she sought to tie-bar to several Democratic bills supporting working conditions for nurses.

“As you have come up with this 31-bill package repealing laws and cleaning up language, we felt that these bills that we have selected are appropriate [and] close some gaps that we have in the law. We were not consulted in this cleanup; this was not a bipartisan effort,” Brixie said.

State Rep. Jeff Yaroch (R-Richmond) said that although he is a co-sponsor of the bills Brixie wanted to tie-bar HB 6192 to, he does not feel they should be connected to a natural resources bill.

Yaroch echoed those sentiments again when Brixie introduced an amendment that would tie-bar a proposed environmental protection bill to a package that would repeal the state’s anti-union Right to Work law — “under the concept of repealing bad laws,” Brixie quipped.

“That is not even in the same solar system,” Yaroch said of the bills that would be tie-barred together. For HB 6190, which repeals section nine of the state’s Debt Management Act, Brixie proposed an amendment to tie-bar the bill to a resolution calling for a bipartisan committee to investigate the actions of former House Speaker Lee Chatfield (R-Levering).

The Republican is accused of sexually assaulting Rebekah Chatfield, Lee Chatfield’s sister-in-law, for more than a decade beginning when she was a child. Lee Chatfield is also facing allegations that he directed campaign funds to family members and legislative staffers and gave staffers in his office $300,000 in taxpayer-funded bonuses.

A Michigan State Police investigation remains ongoing. Lee Chatfield maintains his innocence and has not been charged at this point.

“I think we know you’re innocent ’til proven guilty,” Yaroch said before voting with his GOP colleagues against Brixie’s amendment.

Passed out of committee without discussion was HB 6193, which would limit health inspector powers in the event of an infected and uninhabitable dwelling.

The final set of bills, House Bills 6198-6214, would require the Legislature to be notified if certain state emergency powers are used. GOP amendments were adopted for HBs 6194 and 6195 and all were voted out for immediate consideration.

Brixie said these bills, like the others, “send a message of a clear lack of trust between the Legislature and the executive office.”

Brixie specifically took issue with House Bill 6205, which would require the Legislature to be notified if the Department of Natural Resources (DNR) issues a temporary speed limit for watercraft anywhere in the state.

“If this isn’t the typification of micromanagement and overregulation, I don’t know what is,” Brixie said. She added that the only thing missing in the bill package is “the bill that says [to] notify the Legislature of what the governor had for lunch today.”

State Rep. Stephanie Young (D-Detroit) introduced an amendment which would tie-bar House Bill 6205 to four Democrat-sponsored bills related to water. House Bills 4314, 5953, 5954 and 5955, respectively, seek to institute a “polluter pay law,” place waters of the state in public trust, close the bottled water “loophole” of the Great Lakes Compact and require the DNR to protect waters under its control.

Young’s amendment was voted down across party lines, as were all of Brixie’s amendments.

All 31 bills now head to the full House for consideration.

Forget That College Degree With These High Paying Jobs In Lansing