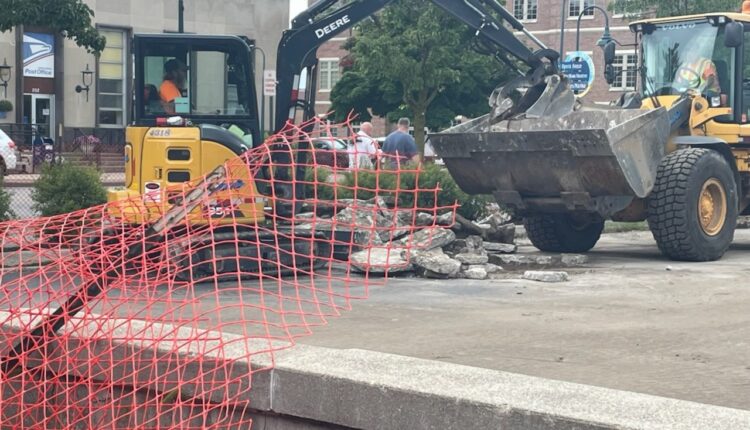 A multi-million dollar vision for downtown Traverse City gets a lift, starting with the leveling of an empty commercial building.

The Downtown Development Authority says it’s the site of the new Rotary Square – and crews are making way for it with the demolition of an old bank building. It’s at the corner of Union and State Streets in the downtown area.

DDA CEO Jean Derenzy says they’ve been eyeing the property for years, and with the help of a one million dollar grant from Rotary Charities and another two million from the state, they’re able to move forward.

Demolition should take just a couple of weeks, and then Derenzy says they’ll be taking more community input on what the square should look like. “We start the vision for the square. How do people want to engage in the square? And how will this be part of the community for generations to come?”

“We have to look at the downtown. It’s not just Front Street. How are we connecting to other parts of the downtown area? And State Street has always been identified as the place for the square. Having it on State Street really provides that connectivity to Old Town, to Garland Street and Hall, and the 100 and 200 block of East Front Street,” Derenzy says.

From the 2018 announcement from Rotary Charities:

TRAVERSE CITY, MICHIGAN – In commemoration of The Rotary Club of Traverse City’s 100 years of service to our region, Rotary Charities has awarded a grant of $1 million to the Traverse City Downtown Development Authority. TCDDA will develop Rotary Square, a gathering space in the heart of downtown designed by and for the people of Traverse City. The project will transform two connected parking lots at the northeast corner of Cass and State streets into a public plaza. Well located to guard against summer heat and winter winds, Rotary Square will host social and cultural events year-round.

As business development in the downtown core continues, Rotary Square will be a people-centered space that is free and available to all. TCDDA is committed to an ongoing, community-led design process that will allow citizens to decide how their civic square will be used for generations to come. In addition to providing casual space to share lunch with friends or read a book, proposed events include an ice skating rink, Santa’s arrival and art installations.