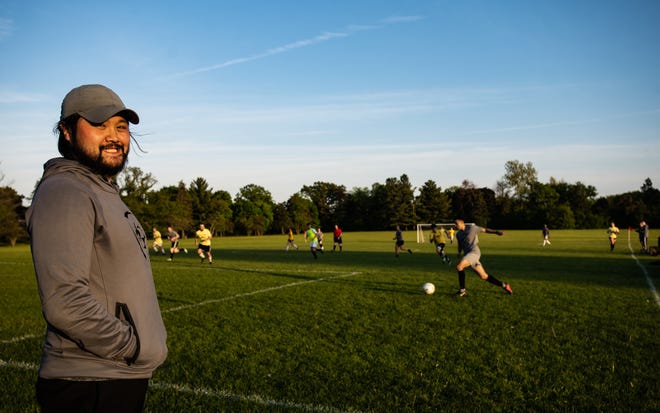 LANSING – For as long as Dean Jong can remember, soccer has been his refuge. His cure for a bad day. His energy. His forum for fellowship.

His desire now is to give that same opportunity to every soccer-loving, recreation-seeking person in our community, his community.

Jong’s passion project is Greater Lansing Open Soccer — a series of soccer leagues, four nights a week throughout the spring, summer and fall sessions (three of them co-ed), with futsal indoors in the winter months.

“Soccer has always been my sanctuary, my safe haven,” said Jong, who lives in Lansing. “It’s where I always felt the best, the most at peace and most energetic. All of my closest friends, basically, except for a few, I met through soccer.

“I want to keep growing, expanding and utilizing (those resources) for creating a safe haven for other people, too. And just providing soccer, more and more soccer for the community.”

His Greater Lansing Open Soccer leagues are on their way to doing so — with 25 teams and about 270 players during the spring session, which runs through June. Registration for the eight-week summer session, beginning in July, is under way.

Jong’s mission is partly driven by his upbringing. He is the youngest son of Taiwanese immigrants, who moved here in the mid-1980s so his father could study for his doctorate at Michigan State. Jong was born shortly thereafter and raised in East Lansing — Spartan Village Elementary and McDonald Middle through East Lansing High — and grew up with limited means.

He still doesn’t know how his parents were able to afford to pay for him to join a club soccer team as a teenager. And so, on the Greater Lansing Open Soccer website, glosoccer.com, players can apply for financial aid or donate to sponsor a player who could use the help.

“People from all over the world come here. Anyone from any background, you get a ball, and then you make some sort of goals in a field, and then you can play,” Jong said. “That sanctuary for me, I want provide that to everyone in the community, wherever they’re from. Not just people with resources.”

Don’t read this incorrectly, though: A lot of this is about creating the soccer experience for adults that Jong and his friends have been seeking during more than a decade of running pickup games and playing in other leagues.

“I think it was mostly because he saw the leagues that were in the area,” said friend and Greater Lansing Open Soccer volunteer Ali Mukhtar. “There wasn’t really reliable, consistent and well-organized leagues, for adults.”

Sure, you can “make some sort of goals in a field” or play with smaller nets, but that’s not the experience Jong knew players wanted. So, when he started Greater Lansing Open Soccer (GLOS) in 2019, he spent his savings on full-sized goals.

“I know that’s a big thing for players, because people like shooting on the net and especially from a distance away,” Jong said.

The GLOS outdoor leagues are seven on seven including goalies, playing on fields that are 65 yards long and 40 yards wide at Francis Park in Lansing. Stats and standings are kept. Jong is at every game (sometimes playing) to make sure things run smoothly.

The four leagues offered in the summer include a Social Co-ed League on Monday nights, a Premier Co-ed League on Tuesday evenings, a Men’s Open League on Wednesday nights and Beer League on Fridays. The level of the leagues is exactly as they sound.

Jong said he figured out he’d be good at organizing such an endeavor over years of running those pickup games and directing musical ensembles. Soccer is a side gig for Jong, truly a labor of love for a guy in his mid-30s who had his eighth knee surgery last week. Jong, who studied music and received his Master’s degree from MSU in collaborative piano, is the director of music and liturgy at St. Therese in Lansing.

“Soccer has been my life and my passion,” Jong said. “Music is more of my work, and I like it. I like performing, but I would much rather go and play a soccer game than I would spend 12 hours at a piano.

“Lansing has a really big and vibrant soccer community and the reason we started (GLOS) is because it deserves good soccer and we want to give it to them.”