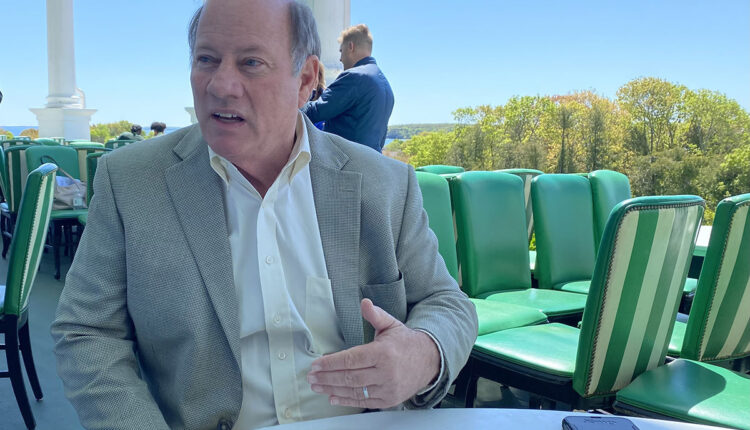 Strategies to tackle violent crime were the focal point of Mayor Mike Duggan’s keynote at the Mackinac Policy Conference, but some of Detroit’s other elected leaders question whether it was the right topic for the statewide stage.

Duggan joined with Police Chief James White to discuss the increasing use of technology in policing and efforts to recruit “quality officers” with a military background for the department.

“There’s no question about it, if you don’t feel safe, everything else comes apart,” Duggan said during the session moderated by BridgeDetroit Executive Editor Stephen Henderson. “We’ve had an issue of violence in this city for decades.”

The 40-minute discussion on fighting crime – including a controversial federally funded contract to expand the reach of a software used to detect gunfire – was viewed by some Detroit City Council members as a “missed opportunity” to talk about building up neighborhood business corridors or population rather than reinforcing a stigma that the city wants to shed.

“This felt more like an opportunity to sell a product instead of talking about the issues and solutions that the whole state is dealing with,” she said. “It felt like a missed opportunity.”

The council and residents have been weighing in on a $7 million contract to expand ShotSpotter, a gun detection software being used in the city’s 8th and 9th police precincts. The expansion will be funded with federal COVID relief money and some residents, activists and council members have opposed it, saying the dollars could be better directed elsewhere.

The mayor said the policy conference might not be the best place to make crime the focus, but he wanted to use the opportunity to give White, who recently became the city’s police chief, a platform.

“He (White) has a different approach than other police chiefs and it was a chance to get him exposed to the conference, so that’s what we’re doing,” said Duggan, who last year used his annual sit-down to introduce the city’s new planning head.

Duggan and White noted Wednesday that violent crime is down about 20% in the first part of 2022, but that the city knows more work has to be done and officials aren’t declaring victory.

The mayor also defended his administration’s push to increase the use of ShotSpotter.

“I’m in neighborhoods talking to actual people who live there and there is 90% support for ShotSpotter,” Duggan told BridgeDetroit. “You have seen major reductions in the precincts where it’s been implemented.”

The technology has been regarded by the Detroit police as one of many tools to curb gun violence. But critics have argued it’s another form of surveillance, like Project Green Light and facial recognition technology, which some say is an invasion of privacy that threatens to deepen over-policing issues in the majority Black and Brown city.

White said elevating the city’s struggles with crime was important and “refreshing for me, because crime is what I do. That’s my responsibility.”

“Having it front and center with policymakers and lawmakers and politicians, it’s so important,” he said. “Crime does affect all of us. Crime has no borders and having the conversation here was super important.”

White stressed “technology is here” and that Detroit’s department and others have to “police smarter.”

“The key in technology is responsibility and policy,” he said. “ShotSpotter is one of the most valuable tools we have because any time you shoot a weapon, something bad is occurring. What shotspotter doesn’t do is record in private spaces. It’s not something we’re doing to eavesdrop. We’re not recording anyone inside of their homes.”

Santiago-Romero said she also took issue with the concept of veteran recruitment, calling it a “very scary” prospect that made her question “so we’re just militarizing our police?”

“We’re bringing in people that, let’s just face it, come from a system that has a lot of bad practices,” she said.

He countered that recruiting veterans won’t militarize the police department. It will bring honorable people to the profession to continue to serve.

“Veterans are the reason that we’re all here. When they are returning from serving our country. I’d love to welcome them home,” he said. “We have to be at the airport and welcoming them home and giving them a ride and talking about opportunities with the police department.”

Latisha Johnson, who represents District 4 on the east side, said she knows a number of veterans who have served on the city’s police force. That includes the former neighborhood police officer assigned to her district.

Detroit Councilwoman Latisha Johnson talks about policing and building business corridors in neighborhoods with BridgeDetroit at the 2022 Mackinac Policy Conference on Mackinac Island on June 2, 2022. (BridgeDetroit photo by Orlando Bailey)

“Within that though, if we were to pursue that we’d have to make sure we provide the support they need,” she said. “We know that a lot of veterans need mental health support to demilitarize their way of thinking when they are coming into an urban area to police.”

Johnson said crime is among a multitude of issues Detroit is facing, but she wouldn’t have made it the focus.

“If we identify that as our No. 1 priority, it certainly does (reflect negatively),” she said.

For Johnson, a goal of her first conference was to connect with law and policy makers “to figure out a way to drive and encourage and support business in our communities.”

Detroit Councilman Fred Durhal III, who represents District 7, said Detroit crime was the right subject for Duggan’s talk. To build the city and its population, people have to feel comfortable.

“That’s how we generate revenue and folks want to feel that it’s safe,” he said. “There’s always a stigma that has historically existed that Detroit is unsafe. Now, we are making strides. Even on a national level, we don’t want to be known as a city that’s unsafe so it’s imperative to talk about some of the great advancements we’ve made in stopping and deterring crime.”

Detroit City Councilman Fred Durhal III talks about his priorities for his west side district and the topic of crime being discussed during the 2022 Mackinac Policy Conference on Mackinac Island on June 2, 2022. (BridgeDetroit photo by Orlando Bailey)

Durhal noted the council’s approval of crowd-sized metal detectors for neighborhood policing as well as ShotSpotter, which Durhal, who chairs the council’s Gun Violence Task Force, said he supports.

“Being here and talking about it at this conference is helping to eliminate the misnomer and to work to chop down that stigma,” he said. “Detroit is a safe place, everybody can come visit with their family. You don’t have to worry.”

Durhal said the city’s economic recovery and the fiscal stability of Detroit is also worth elevating and funding being directed toward quality of life improvements, like recreation centers.

“An hour is not long enough to talk about all of the great things happening in Detroit,” he said.

authored by
First published at https%3A%2F%2Fwww.bridgedetroit.com%2Fcrime-in-detroit-takes-center-stage-at-mackinac-talk%2F