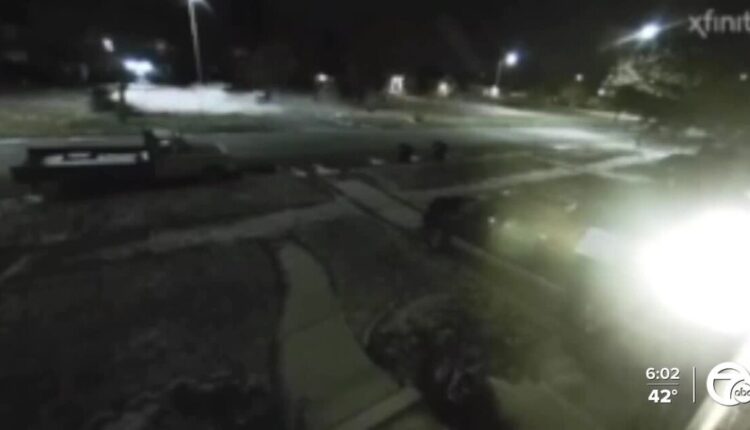 DETROIT (WXYZ) — A man is in critical condition after a high-speed crash on the city’s east side early Monday morning.

Police say it happened on E Outer Drive between Chalmers and Newport around 4:21 am Home surveillance video shows three drivers heading down Outer Drive at a high rate of speed before crashing into multiple parked cars, the median and coming to an abrupt stop.

Detroit police say one man involved in the crash was taken to the hospital in critical condition. Police are still investigating the circumstances around the crash but neighbors say they believe the drivers were street racing.

“I heard a big noise, I jumped up, I ran into my dressing room and I looked out the window and I seen cars hitting each other, turning around in the middle of the street, folks jumping out and hollering,” said one woman who caught the crash on her home surveillance camera. “All the neighbors, you can hear all the neighbors hollering. It was like we were in a war or something.”

The woman, who has lived on the east side for the last 40 years, says speeding and street racing have only become an issue in recent years. She says after she reported the high-speed driving to police, they increased patrols along E Outer Drive but only for a short time.

“It’s a shame that we have to go through this,” she added.

“I don’t know if they was racing or just flying down the street but they always flying down here,” said one neighbor whose van was hit in Monday morning’s crash. “This is the second car we done lost this year because of them speeding around that corner.”

Neighbors say they want the city and police to crack down on the problem.

The Department of Public Works says they have not received any formal complaints about speed concerns along the stretch of E Outer Drive A representative from the department went on to say E Outer Drive is a main thoroughfare and would not be eligible for speed bumps. The department says it would be up to Wayne County, which has jurisdiction over the roadway, to put in speed improvements if possible.

The Detroit Police Department has been vocal about street racing in the past. Earlier this year, police dedicated a special team of officers to crack down on high-speed drivers after an officer was hurt.

Neighbors say they want the reckless driving to stop.