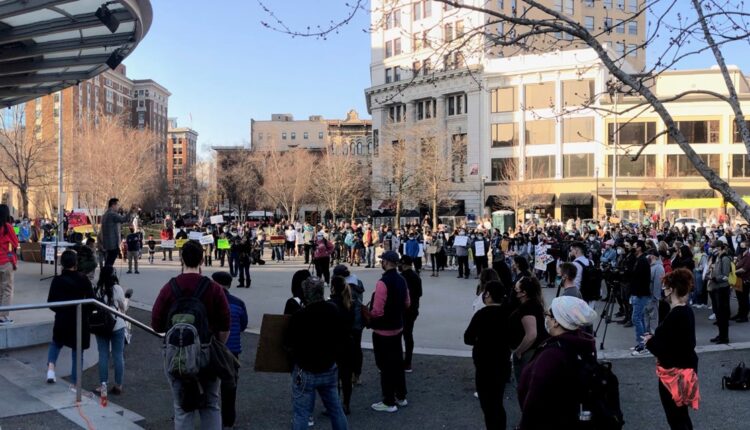 Over a hundred people gathered in the Rosa Parks Circle for the rally and vigil.

GRAND RAPIDS, me. – The Grand Rapids Asian-Pacific Foundation made an effort to organize and spread an event on Saturday to rally against Asian hatred and remember the lives of victims of the Atlanta spa shootings.

By 5pm dozens had arrived at Rosa Parks Circle with signs saying “Stop Asian Hate” and “Racism is a Virus”.

“I think the cynical part of me thought that no one would show up because no one cared about us, but it’s really heartwarming that people came, especially people from other disenfranchised communities like the Black Community, the Latinx Community, the Queer Community. ” said Samantha Suarez, director of marketing for the Grand Rapids Asian-Pacific Foundation (GRAPF).

“The fact that they took the time when they had their own needs to support us – that is really meaningful.”

The rally and vigil takes place days after the deaths of eight people, including six Asian women, in mass shootings at three spas in the Atlanta area.

The shooting comes after a year in which nearly 3,800 hate crimes have been reported to Stop AAPI Hate. The national organization was created to combat discrimination during the COVID-19 pandemic as former President Donald Trump’s rhetoric helped perpetuate anti-Asian racism.

The day before the rally, Suarez had started compiling a list of Asian-owned companies to be supported at Grand Rapids before GRAPF founder Ace Marasigan said he realized that companies might not be featured for fear of targeting want to become.

“I don’t even know where to start, there are so many layers of problems,” Suarez said after the event. “I don’t know where to go from here, but I am very encouraged to see that all of these communities have come out to show their support.”

Marasigan said the future must look like a unity among Asian communities as well.

“We can do so much more when we agree,” he said. “We’re almost there. We just have to continue the conversation.”

In the past, Marasigan said he didn’t talk about the racism he was exposed to.

“Lately, I’ve known I need to be a role model, especially for my boy. He needs to see that you need to be able to get up on your own. It’s been far too long since I would pick it up and not speak it up out, “said Marasigan.

During the two-hour event, speakers took the stage and exchanged words of grief, anger, unity and incidents of racism here in West Michigan and urged the Allies to face the hatred.

“We’re not saying anything more about the violence of the white supremacists,” said Lily Cheng-Schulting, a long-time human rights and disability advocate who recently ran as a Democratic candidate for state representative in District 72.

“I am here today to say to my city of Grand Rapids and my country that I am waiting for the time when all people can be seen as human beings and not goals or individual narratives or a subspecies or inferiority. I am waiting for a while where women are not reduced to their bodies and are recognized for their entirety, “Kue said to the cheering crowd.

“I am waiting for all people to free themselves and others from archaic and false ideas of superiority and division. I am waiting for the time when I do not have to feel like an alien in a country that I call home.”

On the stage, Suarez left a final message for those present.

“Please prove me wrong. Don’t forget us next week.”

► Make it easy to keep up to date on more stories like this one. Download the 13 ON YOUR SIDE app now.