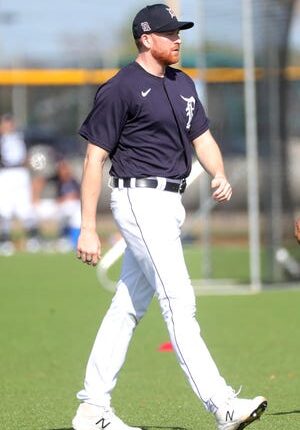 CLEARWATER, Fla. – Detroit Tigers manager AJ Hinch walks into murky waters to explain what happens to right-handed Spencer Turnbull, who was once a potential starter on opening day.

He can’t say too much.

For COVID-19 reasons, teams cannot disclose the details of a missing time without the player’s consent. Turnbull does not have the team’s ability to create coronavirus logs.

“At the moment he is still not in the club and not in the complex,” said Hinch on Sunday. “He reports or does nothing to us here. Obviously we are nearing the end of the camp.”

MANAGER’S INSIGHT: The art of raising fastballs and attacking weaknesses

FIXING THE ISSUE: Why Julio Tehran looks like his old self with the Tigers this spring

The Tigers drop camp on March 30th in preparation for the April 1st opening day against the Cleveland Indians. And there’s a growing chance that Turnbull won’t be released early in the regular season.

“It is becoming increasingly unlikely that he can do a lot from now on,” said Hinch. “We’ll see towards the end of the camp if it’s available or not.”

Hinch said it was “not necessarily” an option to include Turnbull in extended spring training.

If Turnbull can’t clear by the time the Tigers leave Lakeland, he could potentially slip into the back of the rotation and line up against the Minnesota Twins for an April 6 start. With the timing of his situation unclear, it is difficult to determine when he might return.

[ Spencer Turnbull away due to COVID protocol; Michael Fulmer to bullpen? ]

This spring, Turnbull has thrown nine innings over three starts. He has nine strikes and four walks, with five runs allowed. He went four innings against the Baltimore Orioles on March 14, allowing a run with four strikeouts.

On Friday, Hinch announced Turnbull’s absence, adding that the scenario had occurred “without any misconduct of its own”. That means he didn’t break any rules.

Right-handed Jose Urena has not played a game since March 12. He threw three perfect innings against the New York Yankees with two strokes. Last Wednesday, the 29-year-old reached about 60 places in a simulated four-inning game on the back fields.

He is scheduled to start against the Philadelphia Phillies in Lakeland on Wednesday.

“These guys are getting stretched,” said Hinch. “We just challenged the fifth inning with our pitch counts to be used over the course of five innings. In terms of volume, they are perhaps a start, a start and a half away from being conditioned to the season.

“I certainly don’t want to pull these guys when the season starts in the third inning with 75 pitches. That won’t be successful for us.”

Infielder Zack Short and right-handed Bryan Garcia missed a week of camp activity when they were closed in early March for reasons of COVID-19 protocol. Right-handed Jason Foley, a member of the team’s minicamp, was forced to rest at the same time over coronavirus concerns.

Foley has since returned to the Lakeland facilities but has not yet played any games. With a fastball of 100 mph, the 25-year-old recorded two innings over two bullpen appearances with a walk and a strikeout early in spring training.

“We don’t have many innings,” said Hinch. “His schedule did not coincide with our backups or special innings. He had a large time gap where he was not near the mini-camp, much like Garcia and Short.”

Right-hander Julio Tehran will start against the Toronto Blue Jays in Dunedin on Monday. For back-to-back home games at Lakeland, the Tigers will send left-handed Tarik Skubal against the Yankees on Tuesday and Urena against the Phillies on Wednesday.

The Tigers return to Dunedin for another matchup with the Blue Jays on Thursday. Right-handed Casey Mize is about to start.