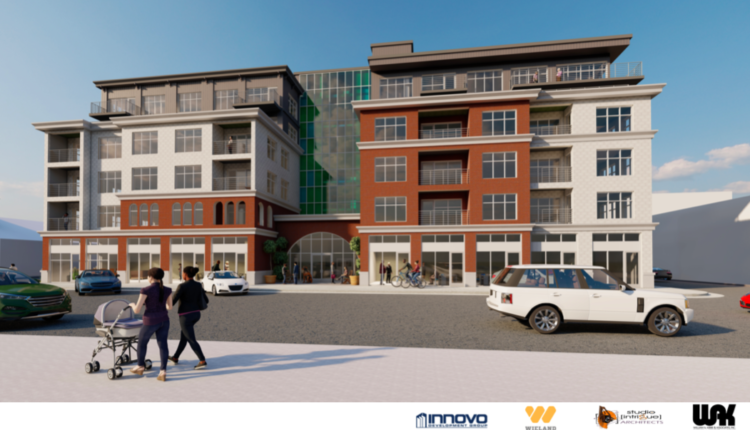 Innovo – the development group behind the recently built breakwater apartment complex on Garland Street in the Warehouse District – plans to build a second complex nearby on two vacant lots at 125 and 145 Hall Street between The Candle Factory and the Bay Area Transportation Authority ( BATA). Transfer station. The mixed-use development will include over 2,100 square meters of commercial space on the first floor and 88 apartments on the second to sixth floors as well as a three-story parking garage on site.

The project, which is legally allowed to be used on the property, requires approval of its site plan by the planning committee as it is estimated that the development will generate more than 500 trip ends per day. The project was first presented to planners at their February 17 meeting, where they requested more information on various aspects of the development, including details of lighting and landscaping plans and a city attorney’s legal opinion on the building’s height, prior to approval.

Height is an important factor due to Proposal 3, a city law provision approved by voters in 2016 that requires a public vote on buildings more than 60 feet tall. Since its inception, the rule has led several developers to build just under 60 feet so as not to trigger an election. This is also the case with the new Hall Street project. But commissioners and some members of the public noted that the mechanical equipment on the roof of the proposed building extends over 60 feet and wondered if that would trigger the charter requirement.

In a legal analysis, prosecutor Lauren Trible-Laucht found that a city policy setting out how to implement the amendment to the statutes requires that building height be measured according to the city area code. The zone code doesn’t count the mechanical equipment on the roof, it measures projects like the Hall Street building on the roof terrace. Trible-Laucht said the planning commission could approve the new building without a public vote, as the city has done for other current projects, including the new 4Front Credit Union headquarters on the corner of West Front Street and Pine Street.

Planners spoke to David VanderKlok of Studio Intrigue, the development architecture firm and the same design group behind Breakwater, about other aspects of the project on Tuesday. According to VanderKlok, Innovo is committed to helping the city achieve its goal of increasing downtown housing by focusing heavily on studio apartments on both the Breakwater and Hall Street properties. The smaller size increases the number and affordability of units, making it more accessible to downtown workers. “It’s a great win-win project for the owners and the city,” he said. Although both developments are located in commercial areas that allow short-term vacation rentals, VanderKlok stressed that such rentals are banned at Breakwater and will also be banned on the Hall Street property. “We don’t want her,” he said. “The leases absolutely forbid them.”

City officials and planners generally supported the development, and Jean Derenzy, CEO of the Downtown Development Authority (DDA) said this would “bring 12 months of quality of life to the inner city.” City Commissioner Christie Minervini pointed out updated lighting and landscaping plans made available to planners since their last meeting, as well as proposed facilities such as bowling green and other rooftop recreational facilities. “I love the look (of the project). I love the layout. “The chairman of the planning commission, David Hassing, also found the building attractive and valued design components such as green roofs, rain gardens and charging stations for electric vehicles. He also praised the planned ban on short-term rental.” Instead, the project seeks to provide long-term apartments at reasonable prices in small ones To create sizes that can accommodate more than 100 people, within walking distance of everything in downtown Traverse City, “he said.

Planners voted 6: 1 to approve the project, Secretary Heather Shaw was against and AnnaMarie Dituri was absent. Shaw cited concerns about a lack of detail in the site’s stormwater plan as the reason for their opposition. Shaw also expressed concern that the city would face a legal challenge regarding the measured height of the building, but said it did not affect her voice. VanderKlok noted that due to its contaminated wasteland status, the rainwater on the property would be carefully managed, with municipal engineering finalizing the rainwater plan. The planners on Tuesday tied several conditions to the approval of their site plan, including that Innovo must work with city workers on utility expansions and utility lines, and work with the DDA to develop and create a new public street scene for the full width of the property install, including potentially heated sidewalks.