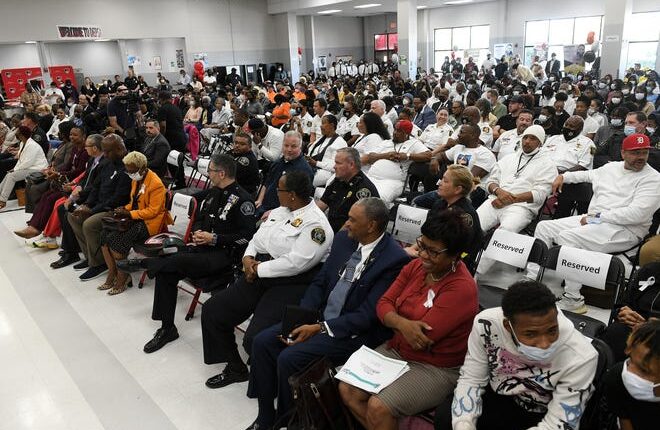 Detroit Police Chief James White defended the ShotSpotter, a controversial gunfire detection system that uses sensors to pinpoint the locations of gunshot activity, at a Thursday community forum ahead of a City Council vote to expand the system.

Detroit Police installed the system in 2020, when it first approved a $1.5 million four-year contract. The City Council is slated to vote on an $8.5 million expansion. The figure includes $7 million for expanding the California-based system to additional Detroit neighborhoods and a $1.5 million continuation of the existing system utilizing pandemic relief funds.

White and Detroit Police Chief of Staff Michael Parrish said gun-related incidents have declined as much as 43% in some areas the system covers. More than 400 people filled an auditorium to hear from the police officials and other panelists at the forum covering topics such as gun safety, criminal justice, mental health and crisis intervention resources.

And addressing criticism, White and Parrish told the audience that ShotSpotter cannot be triggered by human voices. The system’s alerts, which are constantly monitored by a team, do not automatically give responders the legal authority to enter private homes or buildings, they said.

The chief also defended the system as “race-neutral.”

That was welcome news for participants such as Vance Thornton, 70, a lifelong city resident.

“I like the idea of ​​ShotSpotter,” Thornton said. “It increases police response … and that’s been a chronic problem.”

The comments came inside the Detroit Edison Public School Academy, where black tombstone-shaped placards were situated outside but spoke loudly to passersby.

Organizers said the spate of recent headline-grabbing incidents in Detroit, include those involving children, should serve as a call to action.

“There’s no argument. We’ve got to do something,” Bishop Daryl Harris of Total Life Christian Ministries, an event moderator, told the audience. “… We’ve got to come up with some real stuff so we can do some real things.”

The urgency permeated the gathering hosted by the Detroit Police Department’s Office of Workplace & Community Resiliency.

Much of the talk centered on recent controversial incidents and the current climate in a city that FBI statistics have shown remains among the most violent in the United States.

In recent months, Detroit has seen mass shootings and a spate of gun incidents involving children. Detroit Police Chief James White said earlier this month that nonfatal shootings are down in the city this year compared with last year, but said it is difficult to consider the trend of a victory when residents are still getting injured.

This month, a mother was charged with involuntary manslaughter and child abuse after her 8-year-old daughter was fatally shot. Prosecutors said a 10-year-old child found an unsecured handgun at Erica Graham’s home and fired it, striking the girl and killing her. Other recent cases include the Aug. 22 fatality of a 5-year-old boy who shot himself after picking up a gun; an Aug. 4 incident in which a 3-year-old girl was shot while playing with a pistol; and the July 19 fatal shooting of a 12-year-old boy after his 13-year-old friend allegedly picked up a gun and pulled the trigger.

Citing Detroit Police Department data, organizers Thursday told the audience at least 12 children had been fatally shot so far this year, compared with nine for the same period last year.

“I don’t scare easy, but I’m scared for our babies,” said George Ward, another moderator. “…We’ve got to stand up.”

She also noted the work city-based groups have pursued to tackle chronic absenteeism in schools. “When our programs can help improve attendance, it’s a great thing,” Jones said.

Detroit US Attorney Dawn Ison called on strengthening relationships between residents and law enforcement. “You have the power to change our community,” Ison said. “We cannot do it alone. we need you.”