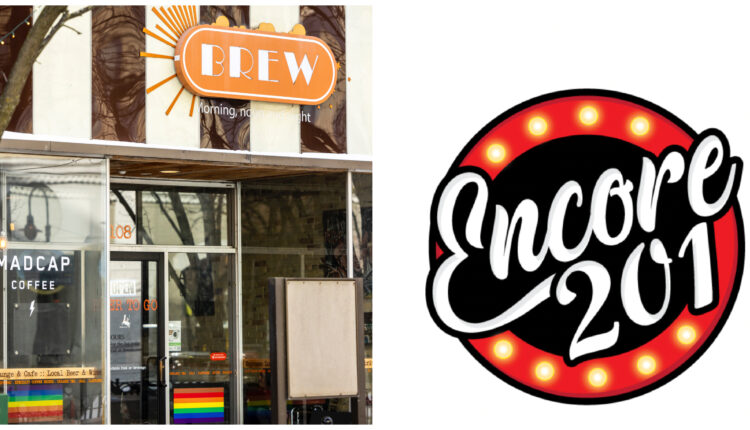 Downtown Traverse City coffee shop Brew is launching a new partnership with Madcap Coffee today (Tuesday) and bringing in new northern Michigan hospitality group Fernhaus to overseas day-to-day operations starting in March. Also in March, Sparks BBQ owner Dean Sparks is planning to open a new music and entertainment venue on Front Street. The ticker has the latest updates on those and numerous other business openings, closings, and changes across the region.

Madcap is opening its first café in northern Michigan in Leland this spring, but Traverse City residents will have access to Madcap coffee starting today at Brew (the shop is offering $2.22 drip coffees all day to coincide with the launch date). Madcap Coffee CMO Josh Weichhand says the company is “thrilled” to partner with Fernhaus and Brew, adding it sees “Leelanau and Traverse City as natural fits for our brand and product.” Fernhaus – including President Kelsey Duda, VP of Marketing Jamie Kirby, and Director of Food and Beverage Ryan Murphy – are working with Brew owners Sean and Missy Kickbush on a “smooth transition of daily operations to ensure that Brew remains the steadfast gathering place it has been for the last decade,” says Murphy.

“Throughout the spring folks can expect to see updated menu options showcasing local farms and producers and an invigorated bar menu for the evening crowd,” he adds. “In the longer term; interior updates, the revitalization of beloved events, and a branding refresh are in the works.” Sean Kickbush, who recently secured a long-term lease extension for Brew with the City of Traverse City through 2031, says that after 11 years it was time “to not only freshen up the aesthetics but also rethink and re-engineer things from an operational point of view point of view We couldn’t think of a better group than Fernhaus to execute that vision.”

One block east on Front Street, Sparks BBQ owner Dean Sparks is targeting a March 10 grand opening for new concert and entertainment venue Encore 201, which will be located above his restaurant at the corner of Front and Cass streets. The venue will offer “local, regional, and national musical acts coupled with a full bar featuring premium craft cocktails,” according to a company release. The venue will be general admission and standing room only for ages 21+ (except for select all-ages events). Encore 201 is kicking off its launch with a slate of shows including the Drew Hale Band March 10, The TrueTones March 11, and the Jabo Bihlman Band March 12.

In other downtown TC news, Mundos Roasting & Co. – which previously announced plans to open a new location called Mundos West in Slabtown – is also opening a location in the 4Front Credit Union headquarters building on West Front Street called Mundo’s 305. While Mundos West will be more of a grab-and-go shop with minimal indoor seating, Mundos 305 will have an expansive food and beverage menu and a “large yet comfortable café,” according to the company. A spring opening is targeted for both locations.

So on West Front Street North Peak Brewing Company temporarily closed its doors Monday for a two-week kitchen renovation project. The restaurant will be closed until March 7. Kilkenny’s will remain open downstairs during construction, with food truck Moe’s Better Burgers providing food. On the other side of downtown, Dharamsala TC officially opened its new yoga studio Monday at 317B & 319 East Front Street overlooking the Boardman River. So, Votruba Leather Goods has listed its business for sale at 112 East Front Street for $150,000. The listing just includes the historic business itself (the store space is leased from the City of Traverse City), which has been run by the same owner for 50 years.

Other openings, closings, and moves…
After eight years in business, Press On Juice announced Monday it will be closing its doors this week on East Eighth Street. Owner Kris Rockwood wrote on Facebook that “with so many changes in the last two years in our community and in my personal life, it is time for a change of focus.” She added that she’s looking for someone to rent the space, noting that “it is a hard time for this industry right now, so I suspect there may be owners in need.”

Marco’s Pizza, one of the fastest-growing pizza chains in the country with over 1,000 stores, is opening a Traverse City location next month. Franchisee Mark Smith is opening the store in part of the former Family Video space on US-31 nears Chums Corner. Marco’s Pizza offers classic and original specialty pizzas, pizza bowls, calzones, and subs. So on the pizza front Fresh Coast Market launched an expanded pizza menu this month at its Long Lake Road store, growing from eight to 28 specialty pizzas that includes a range of savory and sweet pies and non-dairy cheese and goat cheese options.

Two Traverse City bike shops are under new ownership. Following over 40 years in business, Tim Brick of Brick Wheels is retiring and has sold the shop to Andy Weir of Commonwealth Heritage Group. A retirement party will be held for Brick at the Eighth Street store this Saturday from 1 to 4pm, with food and drinks provided. After a year of starting and operating Out and Back Mobile Bike Shop, local bike mechanic David Hagan and business partner Trevor Schmitz have purchased Einstein Cycles on US-31 North. The new owners will have a grand reopening party on March 19, at which they plan to share “details for a new kids trade-in program as well as displaying several new bike brands accommodating everyone’s needs at every price point.”

Wares Bros Frosty Treat has closed its West Bay Shore Drive location after its lease came to an end and the company was “not able to renew this location,” the owners posted on Facebook. Wares Bros Frosty Treat is remodeling its remaining location on South Airport Road and plans to open this spring with combined staff. Meanwhile, Buchan’s Blueberry Hill of Old Mission Peninsula is taking over the West Bay Shore Drive space and plans to open a new ice cream shop called Buchan’s West Bay this spring.

After maintaining classes at a small temporary space for the past year and a half, Ballet Etc. Dance Institute is planning a grand reopening this spring in a new dance studio in Kids Creek Marketplace at 1525 South Division Street (Suite 107). According to director Thomas Morrell, renovations are underway now at the site, which will offer classes and house the Northwest Michigan Ballet Theatre, a nonprofit youth ballet company serving the Grand Traverse Region.

Saltess Sea Creamery has launched a crowdfunding campaign with the goal of opening a new Traverse City facility in the coming year. Owners and cheesemakers Dave and Joy Omar, who have rented space from other cheesemakers including Boss Mouse Cheese and Maple Leaf Farm & Creamery, are applying for a state grant and seeking community support for a required match to complete their buildout. The company is over one-third of the way toward its $30,000 fundraising goal, which has nine days left and offers perks ranging from cheese products to hosted private events to backers.

Finally, several closures have hit the Grand Traverse Mall in recent weeks. CityMac closed its doors in January, citing challenges ranging from the pandemic to big-box competition to supply chain issues. Since then, restaurant Jonathon B Pub has closed – following an owner’s retirement – ​​and the Tacobell franchise in the food court has also shuttered operations.