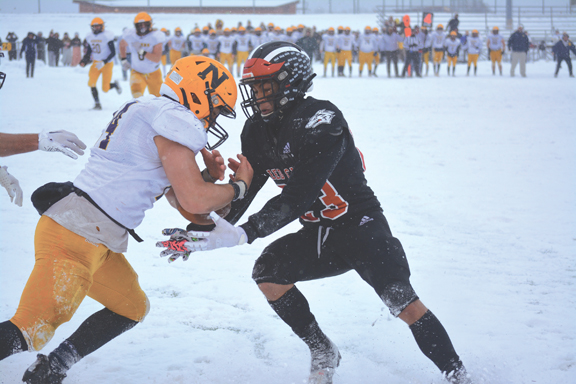 Negaunee linebacker Nico Lukkarinen, left, and Reed City running back Bryson Hughes reach for the ball after it pops out of Hughes’ hands and ends up in Lukkarinen’s during the fourth quarter of their MHSAA 11-player football Division 6 semifinal game played in Gaylord on Saturday. This play was credited with sealing the result in the Miners’ 13-12 victory that sends Negaunee to the D-6 championship at Ford Field in Detroit at 4:30 pm Friday. (Cadillac News photo by Ricardo Martin)

Negaunee (13-0) now faces Grand Rapids West Catholic (12-1) in the finals at 4:30 pm Friday at Ford Field in Detroit, the indoor home of the Detroit Lions.

The Coyotes finished their season at 11-2.

“It was an awesome game,” Miners head coach Paul Jacobson said, who is 20 years removed from his first state title over Hopkins in 2002 as Negaunee reached a state semifinal for the seventh time in school history.

“Our guys played their tails off till the end. Reed City was a good football team and they made it difficult for us in the snow-packed field.

“I am proud of our guys for playing determined and playing to win. They stayed together and believed in one another.”

“Hats off to their kids,” Shankel said about Negaunee. “They played really tough in tough weather conditions.

“I’m super proud of how our kids responded in the conditions and elements and didn’t give up at all.”

Teams and fans who ventured to the game braved temperatures in the 20s and a steady snowfall throughout the afternoon.

When the fourth quarter rolled around, the snow picked up and set the stage for a dramatic finish.

Down 7-6 to start the final quarter, Reed City was driving down the field, intent to take the lead. After converting on a fourth down, senior running back Noah Morgan took it in from two yards out to put the Coyotes up 12-7. The two-point conversion was no good.

Negaunee would get the ball back with around eight minutes remaining, needing a touchdown to pull back ahead. The Miners ran the ball down into Reed City territory before a false start put them behind the chains.

But that didn’t stop the Miners as they were able to convert a long fourth down and continued driving until they reached the end zone on junior Kai Lacar’s 10-yard TD run to go ahead 13-12. The Coyotes’ defense stepped up to stop a Miners’ 2-point conversion attempt, meaning that Reed City would still need some type of score to win.

With a minute and a half left, Reed City junior John Ondrus returned the ensuing kickoff to his own 42-yard line to give the Coyotes good starting field position.

After gaining two first downs, the Coyotes were in Miners’ territory with time almost coming off the clock.

An illegal procedure penalty put Reed City in a 2nd-and-long situation, and two plays later it was fourth down.

With the game on the line, RC quarterback Xavier Allen completed a pass to Bryson Hughes for a first down, or so they thought. Hughes lost control of the ball and it was plucked away by the Miners’ Nico Lukkarinen for a game-sealing turnover.

The teams held the ball but struggled to get far as each offense only had one full possession in a scoreless first quarter.

A Negaunee fumble in its own territory in the second quarter put Reed City in a good position to get the first points. After completing a deep pass to set up a goal-to-go situation, senior running Noah Morgan scored the game’s first touchdown on a 2-yard run to put Reed City up 6-0 at halftime.

With each team punting on their opening possession after halftime, Negaunee finally got something going late in the third.

Following a pass interference call and a huge run play, NHS was set up deep in Reed City territory.

A fourth-down penalty on Reed City put the Miners closer to the goal line and they took advantage, scoring their first touchdown on a Lukkarinen 1-yard run — and important to the final result, getting senior Philip Nelson’s extra-point kick — to go ahead 7-6 heading to the fourth quarter.

Lacar top all players on offense, rushing for 151 yards in 23 carries as Lukkarinen chipped in with 50 yards in 17 tries.

MARQUETTE — When their playoff runs ends, teams can normally find some consolation if their loss comes to the …