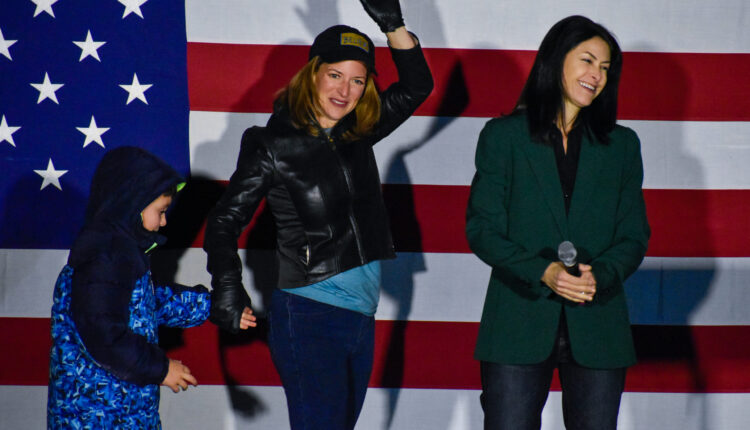 The turnout was record-level overall for a midterm election, according to Benson. More than 15,000 citizens participated in same-day registration and 2 million Michiganders voted absentee.

As of midnight, neither race has yet been called by the Associated Press. Other outlets, including NBC News, have declared Benson the winner.

The Michigan Department of State has predicted that it will take up to 24 hours until all absentee ballots are counted and complete unofficial results are reported.

Both DePerno and Karamo have waged conspiracy-laden campaigns against the incumbent Democrats, which have primarily centered around the false claim that Democrats “stole” the 2020 election from former President Donald Trump. They have used that idea as a basis for predicting, without evidence, that widespread voter fraud could impact Tuesday’s vote.

Nessel and Benson, on the other hand, have long asserted that Michigan’s elections are safe and secure. There is no evidence to prove claims to the contrary.

“Michiganders showed the world that Michigan voters will vote for truth over lies. They will vote for facts over conspiracy theories. And they know the value of real results over empty promises.”

Benson’s statement also called out “conspiracy theorists and election deniers,” warning that they are not going away but she “will not back down.”

Meanwhile, Karamo has repeatedly tweeted baseless accusations that Detroit, Ann Arbor, Redford and some Oakland County cities like Novi are not complying with Michigan Election Law.

Legally, anyone in line by 8 p.m. is entitled to vote as long as they stay in line. This rule also applies to those who are participating in same-day registration, which was approved by voters under a constitutional amendment in 2018.

“Illegally registering people after 8pm. Registering non-Michigan citizens to vote,” Karamo tweeted, without evidence. “They are arrogantly breaking the law. Because we have a lawless Secretary of State, and a corrupt media defending her crimes.”

Karamo also called a situation in Detroit precincts earlier on Tuesday a “crime,” when the issue was in reality an error that was quickly righted by election workers. In the race for attorney general, Nessel has so far outperformed expectations in a race many expected to be tight. Neither candidate has declared victory.

But “things are looking pretty good right now,” Nessel said around midnight at the Michigan Democrats’ watch party in Detroit.

“And not to be too optimistic, but I really look forward to serving the people of this great state for another four years.” she added.

DePerno — who, during the August primary, had called for counties to stop counting votes if they weren’t tallied by midnight — changed course Tuesday and called for every ballot to be counted.

“I know we’re all eagerly waiting to know who will be Michigan’s next attorney general. We must respect the election process and ensure that every *legal* ballot is counted. I ask that my supporters remain patient as hardworking election workers complete the count,” DePerno tweeted at 9:45 p.m.

I know we’re all eagerly waiting to know who will be Michigan’s next attorney general. We must respect the election process and ensure that every *legal* ballot is counted. I ask that my supporters remain patient as hardworking election workers complete the count.

At a watch party with the Michigan GOP, DePerno gave a short statement to the crowd around 11:45 p.m.

“We are within 2 points, Dana Nessel is below 50%. There’s only one-third of the vote counted. We are still in this race,” DePerno said.

As polls shut, hour-long wait at Grand Rapids City Hall for people to register and vote