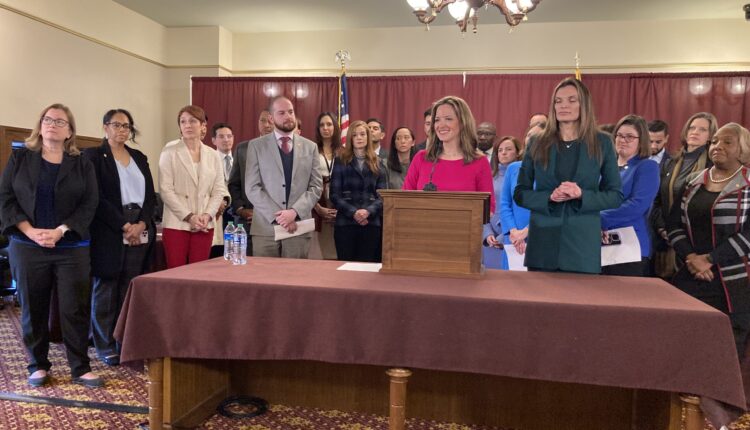 After threats against election workers have soared in the wake of a right-wing campaign to push lies about the 2020 election, Michigan Secretary of State Jocelyn Benson and Democratic lawmakers announced Tuesday plans to protect election officials and crack down on those intentionally sharing misinformation about elections and voting.

“As Michigan’s chief election officer, my responsibility is to ensure that our elections are accessible, safe, secure, and that the results are an accurate reflection of the will of the people,” Benson said during Tuesday’s press conference. “It’s a role that increasingly forces all of us in this work, whether we consider ourselves Republican, Democrat or independent, to endure threats, harassment, false and malicious attacks on our character and integrity, and sometimes even violence.

“We cannot have a secure democracy if we do not protect the security of the people who administer, protect and stand guard over our elections,” Benson continued.

Democratic lawmakers — who now control the state House and Senate — will address election and voting security by:

These efforts come at a time when election officials have faced a relentless right-wing disinformation campaign around elections, and specifically the 2020 election in which President Joe Biden defeated former President Donald Trump with a decisive victory in both the Electoral College and the popular vote.

While election audits and investigations, including those led by Republicans, have repeatedly found no evidence of fraud in the 2020 election, Trump has incessantly promoted the falsehood that the election was stolen from him and his enraged supporters have targeted election officials with a deluge of harassment, threats and violence.

A pro-Trump crowd wielding guns, for example, descended upon Benson’s home after she defended the integrity of the 2020 election and Biden’s victory in Michigan.

The Brennan Center for Justice’s March 2022 survey of election officials found that more than half of them fear for the physical safety of their colleagues. One in six election officials reported receiving threats because of their job, and 77% said threats have increased in recent years, according to the same survey.

Like democracy, election workers are under assault with many fearing for the future

Numerous high profile Republicans in Michigan have repeatedly pushed lies about the 2020 election, including failed GOP Secretary of State candidate Kristina Karamo. Karamo, a Trump-endorsed candidate with a penchant for conspiracy theories, is now making a bid for chair of the Michigan Republican Party.

Republican election officials have not been exempt from Trump supporters’ ire. Georgia Republican Secretary of State Brad Raffensperger, his wife, and their family have reported receiving threats of violence after the secretary of state certified Biden’s victory in Georgia.

“For the last several years, election officials in our state have been faced with an unprecedented wave of continuous, unrelenting harassment and threats,” Benson said. “Enduring these threats creates a near constant strain of anxiety and stress on their work…These threats are a direct extension of the lies and misinformation that many intentionally and knowingly spread about the security and accuracy of our elections.”

This onslaught of threats have left election workers to fear for their lives and have pushed them from their jobs.

“Anecdotally, as someone married to a township clerk, this has affected his ability to retain election workers,” state Rep. Kara Hope (D-Holt) said of her husband, Delhi Township Clerk Evan Hope. “… That’s a shame because when experienced election workers leave the job, a lot of institutional knowledge goes with them.”

Hope said she plans to reintroduce House Bill 5282, which she introduced last year but which never saw any action under Republican leadership. The bill would make it a misdemeanor to intimidate an election official, including a poll worker.

Following the 2020 election, Republican legislators in Michigan and nationwide have pushed the idea that voter restrictions equate to safer elections. In 2021, Michigan GOP legislators introduced a 39-bill package, Senate Bills 273-311, which Benson said at the time would “restrict citizens’ voting rights, harm election administration and demonstrate a lack of knowledge of existing procedure and law.”

The proposal enshrines a series of voting rights in the state Constitution, including that citizens have a fundamental right to vote without harassment. The amendment to the constitution requires state-funded absentee ballot drop boxes and postage for absentee applications and ballots, mandates that military or overseas ballots be counted if postmarked by election day, ensures that only election officials may conduct post-election audits, and requires nine days of early in-person voting, among other changes.

To enact these amendments, Benson said her office has formed an “election policy advisory task force” that is composed of nonpartisan organizations, Republican and Democratic election officials, the chairs of the state House and Senate elections committees, and representatives from Whitmer’s office.

Benson formed a similar task force in 2019 to help advise her office on implementing Proposal 3 of 2018, another voting rights proposal which allowed same-day voter registration, no-reason absentee voting and more.

“Michiganders have spoken; they want to reduce barriers to the ballot box,” said state Sen. Jeremy Moss (D-Southfield), who chairs the Senate Elections and Ethics Committee. “They want to increase access to voting.” Rep. Ann Bollin (R-Brighton), the former Elections Committee chair, said in  a statement after the press conference that she is “willing to work across the aisle on legislation to implement election security measures, protect clerks, and fund our elections.”

Now that Democrats have taken control of the governorship, House and Senate for the first time since 1984, the “pro democracy majority” will be able to pass legislation centered around voting access, Moss said.

“Michigan has had some of the most highly scrutinized elections in the country over the last several cycles and no matter how you measure the metrics, our system has proven to be secure and our election results accurate,” Moss said. “This session we intend to build on the successes of our electoral system that have been administered dutifully by Secretary Benson and the dedicated election officials across Michigan. Our democracy works.”

What Older Americans Need to Know About Taking Paxlovid