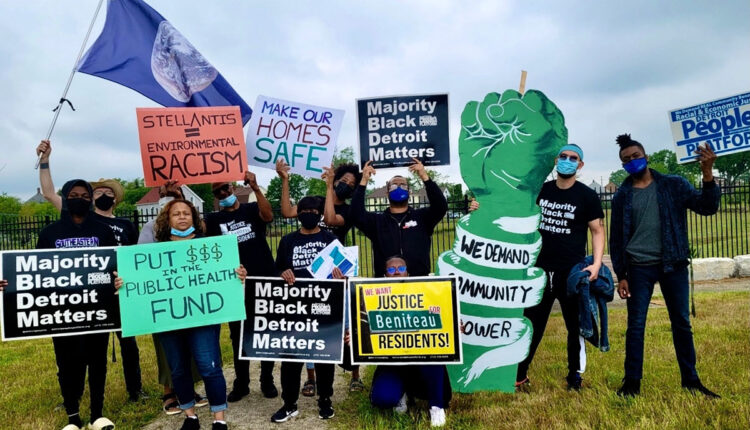 A council member is urging Mayor Mike Duggan to direct some of Detroit’s federal relief funding toward addressing a “public health emergency” for east side residents impacted by odors and air quality violations at the Stellantis manufacturing plant.

Councilwoman Angela Whitfield-Calloway raised the prospect last week, stressing residents have written letters and sent emails to the City Council asking for help. On Tuesday, she told BridgeDetroit that she and her staff are working to formalize the request that would fund initiatives to reduce the impact of pollution on neighbors.

“This is a public health emergency,” Whitfield-Calloway said last week during the council’s Internal Operations Committee meeting. “This is a matter of life or death.”

Whitfield-Calloway added Tuesday that the city needs to identify resources to pay for the simple measures, like air purifiers or window insulation, as residents wait on Stellantis to complete facility improvements of its own at the plant on St. Jean.

“That’s a very easy ask, and I don’t know why we cannot use (American Rescue Plan Act) dollars,” she said. The air purifiers and insulation for windows, she said, “could be a buffer that could prevent some of these odors from going into the people’s homes. At least we can do that.”

Stellantis, formerly Fiat Chrysler Automobiles, expanded its Detroit plant in 2021. Since then, state environmental regulators have cited Stellantis seven times for odors and emissions and residents have argued that their health has worsened due to the pollution. In December, Stellantis signed a consent order with the Michigan Department of Environment, Great Lakes, and Energy, or EGLE, which laid out plans to address the violations, including paying $136,832 into the state’s general fund, upgrading the building management system at Southeastern High School, and installing additional pollution controls, chiefly a ‘regenerative thermal oxidizer,’ at the auto manufacturing facility by June 30.

But with that deadline six months away, Whitfield-Calloway and some fellow council members say that the city should be acting with urgency on strategies to mitigate the pollution now.

Councilwoman Latisha Johnson, who serves District 4 where Stellantis is located and also sits on the Internal Operations committee, said Stellantis should have to pay for the air purifiers, not the city.

“I want to know how long we will continue to have the conversation before we actually require something of them (Stellantis), recognizing that when the city provided support to Stellantis in order for them to open up this plant, the city moved expeditiously,” Johnson said. “Now, we’re giving Stellantis the ability to draw this out.”

The city orchestrated a set of complicated land swaps between major city developers to get the automaker the land it wanted to expand. The city and state combined gave the company more than $300 million in tax incentives.

“We deeply respect the issues under discussion with Detroit City Council,” Jodi Tinson, spokesperson for Stellantis, told BridgeDetroit on Tuesday. “We are working to complete the installation of the new regenerative thermal oxidizer (RTO) and have it operational as quickly as possible to permanently resolve the odor issue,” said Tinson, adding that Stellantis is operating interim odor controls.

Detroit received $827 million in American Rescue Plan Act dollars to address the negative impacts of COVID-19 and the money can be used for a number of things including replacing lost revenue or making infrastructure upgrades. About 6% of the funds have been used so far and city officials said that they plan to step up spending this year.

Most of the ARPA spending has already been planned out by the mayor’s office across 15 categories identified as priority after public engagement and feedback. But changes can be made with the agreement of both the council and mayor. Last year, the council asked Duggan to redirect some of the federal dollars to help Detroiters buy houses from the Detroit Land Bank Authority at a reduced price, which the mayor approved in a larger housing plan.

Whitfield-Calloway said she already sent a letter to the mayor requesting that ARPA funds be used for the community around Stellantis, but has not yet received a response.

The mayor’s office on Tuesday declined to comment on Whitfield-Calloway’s request to use ARPA funding for air purifiers. But Deputy Mayor Todd Bettison did note that under state and federal law, Detroit is not responsible for air quality decisions.

“We have no legal standing to enforce air quality issues; permitting and compliance fall under EPA and EGLE,” Bettison said. “Residents have recently reached out to the administration because they feel they’re not getting the answers pertaining to air quality, and we are working to advocate for these residents and make sure their voices are heard in Lansing.”

Whitfield-Calloway told BridgeDetroit that the amount of ARPA funding she intends to request will depend on how many residents are being affected by the issue.

“We want action. We know how much ARPA dollars we have. I know for a fact that this situation qualifies,” Whitfield-Calloway added.

The proposed actions were raised by Whitfield-Calloway and Johnson after the city’s Civil Rights, Inclusion and Opportunity Department, CRIO, provided the council committee an update on the city’s biannual community benefits ordinance report.

The ordinance requires that developers with projects valued over $75 million provide benefits to local neighbors who could be negatively impacted by a project. CRIO oversees the ordinance and produces compliance reports. In the latest report, all projects were on track – except for Stellantis.

Johnson asked what it would take for CRIO to improve air quality while residents wait on pollution controls to be installed. “We’re relying on EGLE, or allowing EGLE, to take the lead in addressing odor violations,” Johnson said.

Anthony Zander, director of CRIO, disagreed, saying that the department isn’t sitting on the sidelines. But the community benefits ordinance doesn’t authorize CRIO to issue any fines or injunctions, leaving the department with little enforcement authority.

“We are actively engaging and trying to find ways to improve upon and address the concerns of the neighbors in the impacted area,” he said.

Whitfield-Calloway asked Zander during Wednesday’s committee session how many residents are being affected but CRIO did not immediately have an answer. She said that the Detroit Health Department is working to get her a figure.

Concerns were also raised by residents a week ago during the council’s formal session over the conditions and because efforts to manage the air pollution are being deferred to the state.

that Stellantis paid as a fine,” Johnson said last week. “We’ll continue to apply pressure and continue to ask because I know you all have been dealing with a lot of odors in your community that continue to perpetuate the community.”

Jill Greenberg, spokesperson for EGLE, said the law doesn’t allow the state to do that.

“The Air Quality Division does not have the ability to redirect fines collected under an enforcement action to another entity,” Greenberg told BridgeDetroit.

Whitfield-Calloway said she also has staff looking into proposed amendments to the community benefits ordinance to address issues like Stellantis.

“If this was a majority white city, or majority non-Black city, we would not be having this conversation,” she said.

authored by
First published at https%3A%2F%2Fwww.bridgedetroit.com%2Fdetroit-federal-funds-mitigate-stellantis-odors%2F