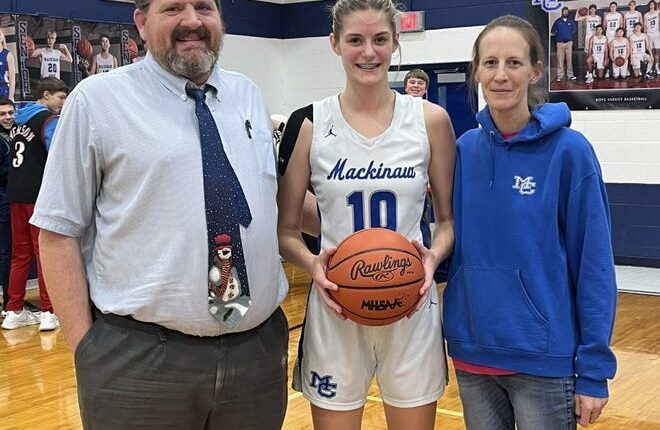 MACKINAW CITY — A year ago, as a junior with the Mackinaw City girls’ basketball team, Madison Smith topped the 1,000-point milestone.

On Tuesday night in the Mackinaw City High School gym, Smith was back to making milestone moments with the Comets, this time one that makes her stand alone at the top of the Mackinaw books and banners.

She passed former Comet great Chelsey Closs for the most career points, sitting at 1,209 after 18 points against the Vikings.

Mackinaw City also improved to 10-0 overall and 5-0 in Northern Lakes Conference play with the victory and finished the night with five different players in double figures.

“I am proud of how well our girls continue to play team basketball and finding great shots,” Mackinaw City coach Jake Huffman said. “Our defense and rebounding was solid and we had six girls with eight or more points and five in double figures. Another night of great team basketball, assisting on 20 field goals.”

HARBOR SPRINGS — The first loss of the season came for the Harbor Springs girls’ basketball team, as they fell to visiting Elk Rapids 51-42 at home Tuesday night.

A close game throughout the night, the Elks turned things on late with a 21-point fourth that came with three 3-pointers and eight points from Kendall Standfest, including a 4 for 4 fourth at the line.

Sierra Kruzel led with 12 points for Harbor, while Hailey Fisher and Olivia Flynn each finished with 11 points.

Stable led the Elks with 23 points on the night.

Harbor Springs (10-1, 5-1 LMC) will next hit the road to Grayling on Friday, Jan. 20 for another Lake Michigan Conference matchup. There’s now a three-way tie atop the LMC standings, with the Elks, Rams and TC St. Francis all at 5-1.

TRAVERSE CITY — The Charlevoix girls’ basketball team got back in the losing column after a brief stint away last week, falling to Traverse City St. Francis on the road Tuesday, 52-25.

The Rayders dropped behind in a 14-9 game after one, then 29-14 at the half, before a big quarterback again in the third from the Glads that made it 48-18 heading to the fourth.

Charlevoix (5-8, 3-3 LMC) will try to rebound when Boyne City visits on Friday, Jan. 20, starting a four-game home stand for the Rayders.

The victory for the Ramblers also snapped a 10-game skid since the season opener.

Mackensy Wilson finished with 15 points to lead Boyne, Elly Wilcox scored 11 and Ava Maginity had 10 in the first half alone. Lily Scherbing also had nine points.

EAST JORDAN — The East Jordan girls’ basketball team picked up a Lake Michigan loss Tuesday night when Grayling entered and willed their way to a 38-32 victory over the Red Devils.

“We struggled to score, but we really struggled with the physicality of the game,” East Jordan coach Tim Smith said. “It was extremely physical and it really played into their hands. We didn’t play well through the trap and through fouls.”

East Jordan had just three players in the scorebook on the night, led by Lindsey Cross with 17 and June Kirkpatrick with nine points.

Harbor Light’s Anne Chamberlin came through with the toughest task of guarding Maplewood’s top scorer and held her to just a single basket.

“I am so proud of how are the team came together on defense tonight,” said Harbor Light coach Jeff Jakeway. “Anne sparked a new level of commitment and determination for our girls defensively tonight. It was fun to see the girls working so well together and genuinely having each other’s back at both ends of the floor.”

Harbor Light (6-2) will next host Cadillac Heritage Christian on Thursday, Jan. 19, which will come in a 5 pm tip in a varsity doubleheader in the newly constructed Solid Rock Center. It’ll come as the opening night in the new gym.

“We had a rough start but after that played hard,” Charlevoix coach Anthony Troshak said. “I was proud of how we responded, but we have to play a complete game and it starts by doing it in practice.

TCSF is a very good team and well coached. I have to give a shout-out to Max Dixon. He did not get a lot of playing time in our last game vs. Grayling, he didn’t hang his head or pout and tonight he was all over the floor and played his butt off.”

GRAYLING — It came as another loss for the East Jordan boys’ basketball team Tuesday against host Grayling, though the Red Devils battled to the end of a 63-58 final.

“Huge effort tonight,” EJ coach Nate Dzwik said. “Overall we showed a lot of improvement as far as what we’ve been seeing the last couple weeks in energy and hustle.

Russell led with 23 points and 10 rebounds and Aenis had six points and 11 rebounds, then Devon Olstrom scored 11.

KINROSS — The Harbor Light Christian boys’ basketball team added another victory Tuesday in a long road trip to Maplewood Baptist, which came with a 61-45 final.

“The boys continue to work on putting defense first and making sure we’re taking care of business at that end of the floor,” said Harbor Light coach Jason Roussin. “We continue to take one step at a time to play Harbor Light basketball.”

The Swordsmen (6-4) will get back into action at 6:30 pm, Thursday, Jan. 19 when they welcome in Cadillac Heritage Christian to the Solid Rock Center for the first-ever game in the newly constructed gym.