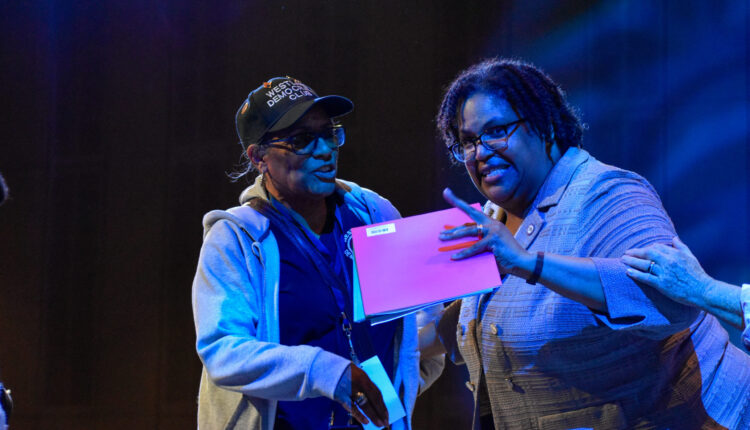 When Michigan Democrats meet for their convention next month in Detroit, Lavora Barnes, who led the party to historic wins in November and complete control of state government in Lansing, won’t have an unchallenged path to a new term as party chair.

Barnes last week confirmed she is planning on seeking another term.

“I am pleased to announce that I will seek another term as Chair of the Michigan Democratic Party,” said Barnes. “I am grateful for the support I have received from, and the hard work of, Democrats across the state. We have much more work to do in this very important 2024 cycle and I look forward to another two years leading the best State Party and the best Democrats in the nation.”

“Lavora’s strong leadership worked hand in hand with our campaign to ensure that we stayed focused on the fundamental issues that mattered most to working families,” said Whitmer in a statement. “I’m excited about the prospects of working with Lavora for two more years and prove to Michiganders that Democrats get things done for them.”

Barnes’ announcement came after former state Rep. Cynthia Johnson (D-Detroit) said she would seek to replace Barnes as leader of the party.

“This past election Michiganders went to the polls and for the first time in 40 years voted for a Democratic Party statewide majority,” read a statement posted to her Facebook page. “With this newfound majority we desperately need a bold, outspoken, proven, and most importantly an accessible leader to Chair the Michigan Democratic Party – and that person is Rep. Cynthia A. Johnson.”

Without actually naming Barnes, Johnson criticized her leadership of the party.

“The facts are clear, we currently have a Chair who is from Virginia with no real ties to Michigan making her ‘behind the scenes’ leadership, silence, and lack of presence in our community even more concerning,” continued the statement. “It goes without saying. that Rep. Cynthia A. Johnson has the exact opposite reputation and as Chair will put an end to business as usual and self-serving interests in the Michigan Democratic Party.”

Barnes, the first Black female chair of the party, moved to Michigan in 2001 and has worked for Michigan House Democrats and former President Barack Obama’s campaign. She has been hailed for her leadership since being elected as chair in 2019 after serving as chief operating officer during former Rep. Brandon Dillion’s four-year chairmanship.

“She’s probably the hardest-working person I’ve seen in politics,” Dillon told the Advance in a 2018 interview. “She’s always one step ahead of everyone else.”

During her tenure, Barnes has overseen efforts to help President Joe Biden win back Michigan from Republican Donald Trump in the 2020 presidential race, while also ensuring Whitmer, Attorney General Dana Nessel and Secretary of State Jocelyn Benson all won second terms in 2022. Democrats also won majorities in both the state House and Senate for the first time in nearly 40 years.

Johnson, who also is African American, left the Legislature last month after being disqualified from the August primary ballot due to overdue campaign filing fees and then losing a write-in campaign against Rep. Tyrone Carter (D-Detroit). The state reapportionment process pitted the Democrats against each other in a newly drawn district.

She drew national headlines in the aftermath of the 2020 presidential election when during a House Oversight Committee hearing featuring Rudy Giuliani, the former New York mayor who led Donald Trump’s efforts to overturn the election, Johnson openly questioned the truthfulness of Republican witnesses as they alleged, without evidence, voter fraud in Johnson’s district.

She quickly became the target of racist name-calling and threatening voicemails, which she shared on her Facebook page. However, a highly edited video of her response to the voicemails, which Johnson referred to as a digital lynching, prompted House Republican leaders to temporarily remove her from committees, although she was eventually reinstated.

Prior ro Barnes, Michigan had only one African-American Democratic party chair, Melvin “Butch” Hollowell, an attorney who served as co-chair with longtime Chair Mark Brewer and went on to be corporation counsel of the city of Detroit under Mayor Mike Duggan.

The only female Michigan Democratic Party chair before Barnes was Libby Maynard, a former lieutenant governor nominee who served from 1979 to 1983. The field for the chair race is jam-packed and includes several GOP candidates who lost their 2022 elections.

Matt DePerno, who lost his attorney general bid by 9 points, is running for chair alongside Garrett Soldano, who lost the Michigan GOP gubernatorial primary in August.

Other candidates include Kristina Karamo, who lost her secretary of state bid by 14 points, and Lena Epstein, who lost bids for the University of Michigan Board of Regent and the U.S. House.