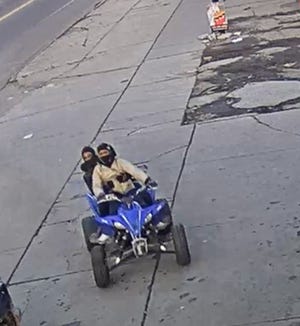 Detroit police are working to find two people wanted in connection with a shooting last weekend that left a teen wounded.

Witnesses told officers they saw two males on an ATV exchanging gunfire with someone in a black SUV at about 7:09 pm Saturday in the 13800 block of East Seven Mile, the police department said in a statement.

The 13-year-old girl walking down the street at the time was graced by a gunshot in the foot, according to the release. She was hospitalized in stable condition.

“We do not believe she was targeted in the shooting,” police said Monday.

The teen had been walking a dog that also was struck in the paw in the incident, WXYZ (Channel 7) reported. Detroit police on Monday did not confirm the injury to the dog.

Anyone who recognizes them or has information is asked to call the Detroit Police Department’s Ninth Precinct at (313) 596-5940. Crime Stoppers of Michigan accepts anonymous tips at 1-800-SPEAK-UP.