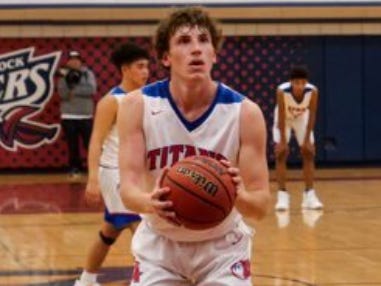 Another Majerle set to play basketball at Central Michigan

Max Majerle, the son of Chippewa’s legend Dan Majerle, announced his commitment to the program in a Twitter post this week. Majerle is a 6-foot-4, 185-pound shooting guard out of Paradise Valley, Arizona.

Dan Majerle was head coach at Grand Canyon University in Phoenix until 2020. Max Majerle played in high school in Arizona, before a prep-school year at Brewster Academy in New Hampshire.

“Grateful that my journey has led me to this opportunity,” Max Majerle wrote on Twitter on Thursday.

Max Majerle was named all-region at Brewster in 2021-22, drumming up additional recruitment interest after a decorated career at Arcadia High School in Phoenix. He suffered a torn ACL as a sophomore, before finishing with strong junior and senior seasons.

Max Majerle received mild interest from mid-major Division I schools, including from his father when he still was coaching Grand Canyon, as well as Northern Arizona and Portland State, among others.

Dan Majerle, a Traverse City native, played at Central Michigan from 1984-88, leading the Chippewas into the 1987 NCAA Tournament. He was the 14th overall pick by the Phoenix Suns in 1988, and played in the NBA through the 2002 season. He was a three-time All-Star.

Dan Majerle’s No. 44 is retired from Central Michigan.

There are differences in father and son’s games, of course, starting with the shooting hand.

“I used to study his highlights when I was young on YouTube,” Max told AZPreps365 in 2020. “I used to watch and try to perform his own form with my form, even though he’s a righty and I’m a lefty.

“He’s taught me pretty much everything I know.”

But Max Majerle is trying to chart his own path, telling AZPreps365, “I’m just trying to do my own thing.”

Central Michigan was 7-23 in Tony Barbee’s first season as head coach, but was the only team from the state to make the Mid-American Conference tournament. The Chippe was lost to Toledo, 72-71, in the quarter final.

In more CMU news, head women’s lacrosse coach Sara Tisdale has opted not to seek a contract extension after leading the team to its first NCAA Tournament appearance. She called it a family decision, leaving the Chippewas after seven years on the job. She started with the program in 2016, and had a 54-55 record. Avery Blackmon is the interim coach.

Bicyclist dies in collision with car east of Grand Rapids