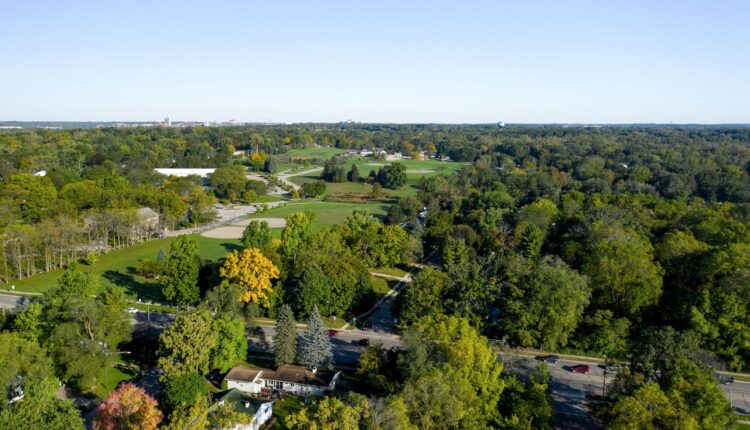 ANN ARBOR, MI – Ann Arbor is entering into negotiations with the owner of an eight acre property with hundreds of trees to see if there is any potential to avoid the subdivision development.

The city council unanimously voted this week to instruct city officials to look into an alternative development at 2857 Packard Road.

Officials are interested in a new proposal from Thrive Collaborative, which has reached out to the owner to purchase part of the property for a five-story sustainable housing development called The Canopy, while the city could acquire and maintain the surrounding wooded area.

To achieve this, changes would have to be made to a January 2020 informed consent form in the Washtenaw County Circuit Court between the city, owner Robert Weber, and contractor Peters Building Co.

The previously agreed deal, which emerges from a lawsuit over the city’s rejection of subdivision plans, provides for a subdivision of 51 homes to be built, including 25 single-family lots and 26 attached units in four buildings.

That would keep 54% of the area as open space and get 62 forest trees and 13 prominent trees.

Peters Building Co. is no longer interested in developing the site and Weber is now open to alternative ideas, according to city officials and Thrive Collaborative.

Weber did not respond to requests for comment, nor did Peters Building Co.

The city has not yet received a formal request to change the consenting decision, officials said.

The approved resolution council instructs the city administrator and city attorney – and the city’s Park Advisory Commission if Parkland acquisition funds are considered – to conduct a preliminary assessment of the feasibility of an alternative development upon receipt of such a proposal, and then advise the city council on the next steps to recommend .

Councilors want enough information to determine whether further consideration of an alternative development is in the best interests of the city.

Councilors Travis Radina, Julie Grand and Kathy Griswold jointly supported the decision to enable city officials to begin negotiations with the owner and a developer of the owner’s choice.

“This would just start that process,” said Radina, D-3rd Ward, noting that a formal site map has not yet been submitted.

Any opportunity to look at a new type of development that preserves open space and accomplishes many community goals is important, said Hayner, noting that he took a virtual tour of the grounds to see the opportunity for park paths.

“It’s an interesting idea,” he said.

Grand, D-3rd Ward, said she has not supported spending millions of dollars from the city’s parkland livelihoods in the past to purchase the property, but she sees this as another opportunity now.

“I just want to thank all of the neighbors and residents who reached out to us, who asked big questions, who are willing to think differently and possibly adopt different types of housing, which I think is great.” She said. “I think it’s really exciting to be thinking about living along this transit corridor and including this property in this conversation.”

First, he said, part of it is not building on previously undeveloped land. Enough has been developed by the planet and there are many developed areas to increase housing density, he said, also calling for ecological restoration.

“To avoid the catastrophic consequences of climate change and create the sustainable development solutions we need, rather than focusing on what is politically possible, we need to focus on what is technically necessary,” said Grocoff .

Thrive officials say they have been speaking with Weber for months about their proposed development and options for buying the land. There’s no formal agreement yet, but Weber supports the idea, according to Thrive.

Grocoff hopes that working together can lead to development that is socially just, culturally rich and environmentally restorative.

There could be 51 to 70 apartments or condos, or a mix of both and a mix of unit types and price points, and the building would be all-electric, solar-powered and net-zero, following the eco-friendly principles of the Living Building Challenge, Grocoff said.

Only the rear portion of the site, which is degraded and overgrown with sea buckthorn, would be developed, preserving more than 5 acres of oak, walnut and hickory tree heritage and landmarks, Grocoff said.

Former city council member Anne Bannister was a leading proponent of saving the tree-covered area. It contained pre-settlement trees in Ann Arbor that are a native fragment of forest and should be considered the city’s top priority for protection.

Grand said this was possibly one of the most complex places she’s ever come across on the council.

“It is really imperative that we get more information here,” she said, adding that she wants a full understanding of the pros, cons and tradeoffs.

Councilor Ali Ramlawi, D-5th Ward, raised concerns about the resolution specifically mentioning Thrive Collaborative as a developer in discussions with the owner.

Though city officials said this was the only developer the owner was working with at the time, Ramlawi was concerned that Thrive had “an inside track.”

He gained support for the strong reference to Thrive in the resolution, arguing that the city should be open to any developer who can achieve the city’s goals for the site.

City administrator Tom Crawford said staff could return to the council with an update on negotiations with the owner and the developer he selected within 90 days.

After careful review, employees can determine if a deal is possible or if it’s going to go broke, said Derek Delacourt, administrator of community services.

Ann Arbor banned Airbnb homes in neighborhoods. Now they are in legal limbo.