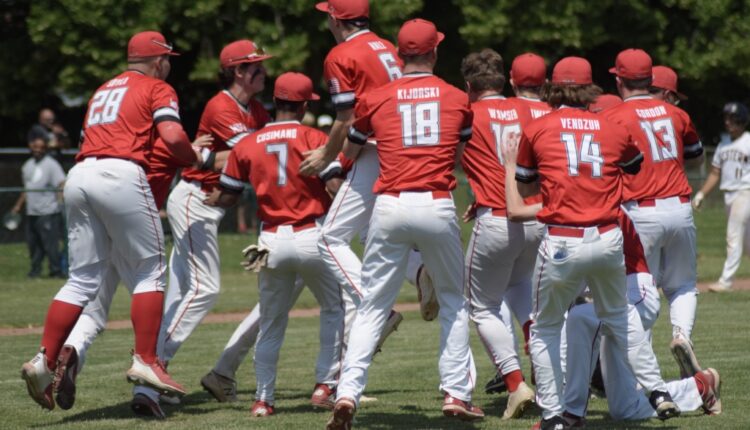 The sophomore left-hander struck out six and came within an out of pitching a complete game while leading the Big Reds to their first regional championship with a 2-1 Division 1 victory over Detroit Western at Wayne State on Saturday.

Andrew Schuster struck out six while pitching Chippewa Valley to a regional championship with a 2-1 victory over Detroit Western on Saturday. (GEORGE POHLY — MediaNews Group)

Schuster allowed two hits before being relieved by senior Logan Cherry with two out and two runners on base in the top of the seventh.

A bases-loaded hit off Cherry drove in the Cowboys’ run, but the game ended when a runner for the Public School League team was tagged out at home.

Schuster, who retired in one stretch 11 batters in a row, leads Chippewa Valley in innings pitched this season.

“Schu has been great for us all year long,” coach Gregg Sadowski said after the Big Reds earned the right to play in a state quarterfinal game later in the day at Harwell Field. “He’s been one of our horses.”

Schuster relied on his change-up throughout the morning game.

“I was able to keep them off balance,” he said.

Chippewa Valley finished next-to-last in the MAC White Division, but has won four playoff games, including the regional clincher.

“It feels phenomenal,” Schuster said. “We got off to a slow start this year, but got hot in the playoffs. We’re pitching really, really good and putting the bat on the ball.”

Chippewa Valley, who had five hits in the game, scored one run in the first inning and one in the fourth.

Carlo Corona’s single drove into Jack Thalgott, who led off with a walk, in the first.

Thalgott’s single scored Evan DiBucci, who had singled and taken second on a sacrifice bunt by Tyler Hall.

“As much as the kids don’t understand it, doing the little things (like the bunt) win games,” Sadowski said.

In the seventh, Norberick Garcia’s opposite-field hit to left was fielded by DiBucci while a run scored. As DiBucci threw home, Western’s Oscar Marquez fell rounding third base and another runner, thinking Marquez would go home, raced toward third.

As Western runners continued to move, Chippewa Valley infielders threw the ball to second and then third before throwing home, where first baseman Corona was covering and tagged out Marquez.

“It was scary,” Schuster said.

Grosse Pointe North played Birmingham Groves in a regional final following the Chippewa Valley/Western game. The Big Reds were to play the winner of that game in the afternoon.